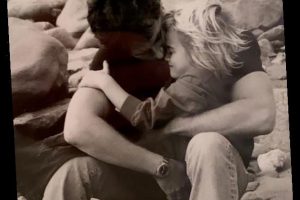 The model son of Cindy Crawford and Rande Gerber turned 21 on Thursday, and his famous parents both posted sweet throwback photos on Instagram in honor of his big day.

Crawford, 54, shared a picture of herself cuddling baby Presley on the beach with the caption, “Always and forever my little boy!”

“Happy 21st birthday @presleygerber,” the legendary supermodel added. “Where did the years go? So grateful for the time we’ve had together the last few months. I see your heart and your growth and I’m so proud of you! Excited to see what’s next! 😘 🎂 💙”

Crawford’s longtime friend Linda Thompson shared a sentimental message in the comment section, “Happy birthday to @presleygerber ! I remember when he was in your tummy! Where did the years go indeed!💜💜”

Presley, whose sister is fellow model Kaia Gerber, replied, “I love you Mom. Thank you for the gift of life.”

Rande also wished his son a happy birthday on social media, posting one childhood pic on his Instagram Story and two photos of Presley as a teenager to his main feed. “Happy birthday to my boy. They say 21 is the first day of the rest of your life. You got this. But, I wouldn’t mind if you still asked my advice every once in awhile even when you don’t need it. I love you! Dad,” the 58-year-old businessman wrote alongside two black-and-white snaps of himself embracing Presley and kissing him on the forehead.

The photos are a series of throwback shots, before Presley debuted several neck tattoos and one on his face that reads "MISUNDERSTOOD" in capital letters across his right cheekbone. In March he defended his decision to get a face tattoo in an Instagram Story writing, "Most and a lot of people can get a face lifts, change genders, lip injections, etc and it’s offensive to say anything in today’s age but I get a little face tattoo and now people love to hate me.. Hmmmm?"

"You don’t know how I feel. You’re not in my head,” he said previously in an Instagram Live video. "If anyone has s— to say to me about this, or anything else, or my family, or how I grew up … I will give you my address — I promise — and you can come say it to my face."

"If I thought this was going to ruin my face or I didn’t want this, I wouldn’t have done it. I think that’s a pretty obvious thing," he also told viewers in the video. "It says misunderstood, because that’s how I felt my entire life."

A source told PEOPLE last month that Presley — who has been dating 20-year-old Sydney Brooks since March — is "doing well" and working at his dad's Malibu restaurant, Cafe Hasan, amid the coronavirus pandemic.

"Presley seems to be doing well. He is very focused on helping his dad out to keep their restaurant going. He is working most days," the source said, adding, "He and Sydney work together" and "try to work the same shift."

"Presley still lives at his parents guest house and Sydney spends time there as well," the source continued. "Presley has slowed down the partying."

In April, Presley gave fans a peek into his life working at Cafe Habana with a photo of himself in the kitchen wearing a bandana over his face and placing an order of food on the counter.

"We’re still out here working!" he captioned the photo.