George Clooney to Be Honored by MoMA Film Benefit 2020 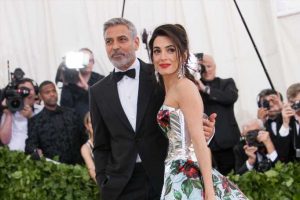 The Museum of Modern Art in New York will honor George Clooney at this year’s Film Benefit, which is presented by Chanel. The 2020 event will take place virtually on Dec. 7 and benefits both MoMA and Artist Relief, an emergency initiative launched by a group of grantmakers in the arts field, giving financial support to artists nationwide affected by the coronavirus pandemic. For the first time, supporters have the option of buying a $25 ticket to directly benefit Artist Relief.

“George Clooney’s vast contributions as an actor, director and producer are surpassed only by his deep commitment to advocating for social justice and humanitarian aid around the world,” said Rajendra Roy, The Celeste Bartos Chief Curator of Film at MoMA. “We take great pride in honoring someone who uses the arts to amplify such important causes and are immeasurably grateful to Mr. Clooney and those who support Film at MoMA, especially at the end of such a tumultuous year when the future of cinemas in New York City remains uncertain.”

“The arts, especially film, are critical to civil society especially during these challenging times,” said Glenn D. Lowry, The David Rockefeller Director of The Museum of Modern Art, in a statement. “We are proud to continue championing the important contributions of film and filmmakers, and grateful to support Artist Relief and all of the vital work that they’re doing to help artists across the country during the COVID-19 pandemic.”

Chanel has supported the MoMA benefit since 2011. Past honorees include Martin Scorsese, Tom Hanks, Laura Dern and Julianne Moore.

END_OF_DOCUMENT_TOKEN_TO_BE_REPLACED

END_OF_DOCUMENT_TOKEN_TO_BE_REPLACED
We and our partners use cookies on this site to improve our service, perform analytics, personalize advertising, measure advertising performance, and remember website preferences.Ok