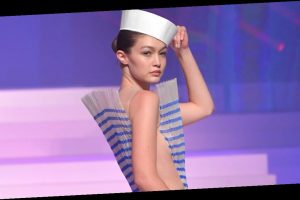 “I was coming out of high school, I still had my volleyball body.”

Gigi Hadid is one of the highest paid models in the world, which is impressive considering she made her runway debut just over five years ago.

French fashion designer Jean Paul Gaultier was first to cast the now-24-year-old in Paris, something she claims few would have done at that time considering the feedback she was getting about her body.

"He was the first designer that let me walk on a runway in Paris, it was in his last ready-to-wear show," Hadid told i-D for the publication’s Icons and Idols Issue. "At the time I was still starting out in my career, I was coming out of high school, I still had my volleyball body. It was a body that I loved. I knew how hard I worked to have those muscles, to be curved in those places — I kind of miss it now. At the time, people were hard on me and tried to say that I didn’t have a runway body."

"So for Jean Paul to have me at his last ready-to-wear show in 2015 — not only to have me, but also to put me in an outfit that didn’t cover a lot… like, there were still stylists or designers at that time who were putting me in their shows, but putting me in something that really covered my body," she went on. "And so for him to make me feel like he wanted me to shine in that way, it really meant a lot to me as a young model. And I know that he has done that for a lot of people."

Just last month, the iconic designer announced his retirement with his spring 2020 couture show. In a bit of a full-circle moment, Gigi partook.

But even before Gaultier took his chance on the athlete daughter of millionaire real estate developer Mohamed Hadid, there was someone else laying the groundwork for her confidence. Gigi says her mom, Yolanda Hadid, who modeled herself back in the day, actually gave her her first real shot at success.

"And that wasn’t just in the industry — she always allowed me to be creative growing up, she had such a positive impact and always encouraged me to express myself in any way, whether that was cooking, drawing, trying to learn how to sew or letting me use and break her cameras," Gigi explained, adding that her list of mentors has grown since then. "But I think as I’ve got older in my career, I’d say Carine Roitfeld and Stephen Gan. I call them my fashion fairy godparents. Then there’s my manager Luiz. Tommy Hilfiger giving me four seasons of a collection was insane. To put that kind of trust in someone — it gave me so much confidence in myself and that meant so much to me."

Though she’s passionate about what she does, she’s not pigeonholing herself. She may want to explore other aspects of the industry, switch industries and/or focus on having children.

"I think that as I get older… well one day I’ll start a family and I don’t know if I will always be modelling. I love the creative side of fashion, it’s so fulfilling," she said. "The people I work with make me so happy, I’m so lucky to be around them. But who knows? Maybe I’ll take up full time cooking!"

When asked what she cooks for people to make them happy, the model replied, "It depends on the person. My favourite thing to do is say, ‘What’s your favourite food to eat? What’s your favourite kind of food?’ And I’ll try and make it, even if I’ve never made it before. I love that little challenge. That’s my favourite question to ask people because it reveals something about that person, it’s whatever makes them feel warm."

As for what makes her feel warm, Gigi said any time she gets to create "with, and for, other people."

"Those really special moments at work where you’re just like, ‘Wow, this is why I did this job.’ I think that that’s the same feeling I get when I’m sitting around with friends, or painting or, or making the people I love dinner," she said. "I think just making something for other people, and making other people happy. It’s really fun and I try to create little moments like that in my life all the time."

END_OF_DOCUMENT_TOKEN_TO_BE_REPLACED

END_OF_DOCUMENT_TOKEN_TO_BE_REPLACED
We and our partners use cookies on this site to improve our service, perform analytics, personalize advertising, measure advertising performance, and remember website preferences.Ok