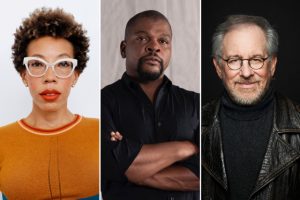 Sherald and Wiley were the first Black artists to be commissioned to paint the official portraits of a U.S. president and first lady in 2018.

To coincide with the gala, “The Obama Portraits Tour,” which originated at the Smithsonian’s National Portrait Gallery in Washington, D.C., will be on view at LACMA from Nov. 7 through Jan. 2. A companion exhibition, “Black American Portraits,” examining two centuries of Black portraiture from LACMA’s permanent collection, will be on view Nov. 7 to April 17, 2022.

Earlier this year, Sherald’s first West Coast solo exhibition, “The Great American Fact,” depicting Black Americans in scenes of leisure, was on view at Hauser & Wirth in downtown L.A., and was visited by Michelle Obama, among others. Sherald’s portrait of Breonna Taylor, whose fatal shooting by the Louisville police helped galvanize global Black Lives Matter protests, appeared on the September 2020 cover of Vanity Fair and was acquired by the Smithsonian Museum of African American History and Culture.

‘Sex and the City’ Reboot Fashion Moments: See the Photos

Although he’s now based in New York, Wiley grew up in South Central Los Angeles, and found early inspiration to become an artist through visits to LACMA. In a style that’s been described as descended from Titian, Reynolds and Gainsborough, his paintings, sculpture and video work replaces traditional aristocrats with contemporary Black subjects, highlighting their absence from cultural narratives.

Spielberg’s 32 films range from summer blockbusters “E.T.,” “Jurassic Park,” “Jaws” and “Indiana Jones,” to historic dramas “Schindler’s List,” “Saving Private Ryan” and “Amistad.” He is a three-time Academy Award winner, a Kennedy Center honoree, a recipient of the Irving G. Thalberg Award from the Academy of Motion Picture Arts and Sciences and the Presidential Medal of Freedom in 2015 from President Barack Obama. Spielberg’s spin on “West Side Story” will be released Dec. 10.

As part of its 100th anniversary celebration, Gucci is continuing as presenting sponsor of the Nov. 6 gala, and Alessandro Michele will stage his next fashion show in L.A. earlier that week. It’s shaping up to be quite a month for the brand. “The House of Gucci” film starring Lady Gaga and Adam Driver is set to debut Nov. 24.

LACMA is in the midst of a $750 million renovation, which has included the demolition of many of its existing buildings in preparation for a new Peter Zumthor-designed complex going up across the street that will bridge the original museum over Wilshire Boulevard. It will feature theme-based rather than historically based galleries, similar to the approach at the renovated Museum of Modern Art in New York.

It’s been a challenging pandemic year-and-a-half for the L.A. institution: the museum sold director Michael Govan’s $6 million Hancock Park house to raise funds while the museum was shutdown, there have been board resignations and negative press about the renovations. The new building is set to be completed by the end of 2023.

Also on the film front, the Academy Museum of Motion Pictures next door on Wilshire Boulevard is set to open with a star-studded gala for 500 on Sept. 25.