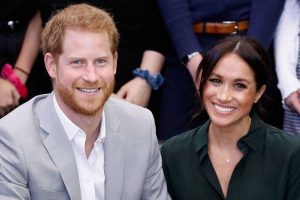 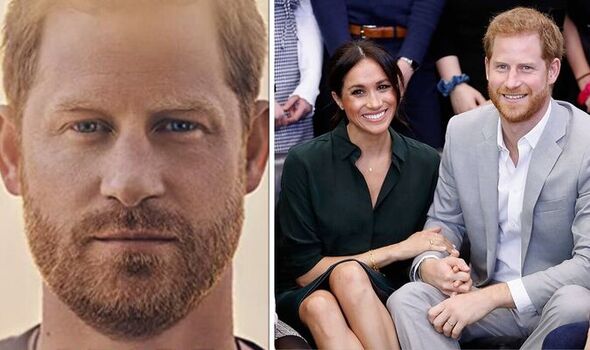 Style and royal expert Miranda Holder commented on Prince Harry and Meghan Markle’s “styling secrets” in their most recent portraits by photographer Ramona Rosales. The expert talked about what the choice of clothes and accessories reveals about the couple.

Rosales took the powerful picture that Prince Harry used for his new book and memoir, Spare, which is set to be published in January 2023.

Meghan used the same photographer for her recent interview with Variety magazine. The Duchess of Sussex was on the cover of the publication wearing a powerful gold choker necklace.

She tied her hair back into a ponytail and seemed to be wearing a black sleeveless dress.

Miranda explained that despite the similarities between the general feel of the images, “the actual styling of the couple could not be more different”.

Harry’s image was kept “deliberately simple,” Miranda said. “The hint of an unassuming T-shirt in shot, as well as his favourite sentimental dog tag necklace featuring A for Archie suspended on a simple black threat.”

Miranda claimed Harry’s look is “unassuming, redirecting a gaze back into his eyes, there are no fancy clothes that detract from the message here”.

“Harry wants to set the record straight and he is about the bare his soul,” the fashion expert opined.

Meghan, however, “looks like a goddess”. The stylist explained that she “oozes polished Hollywood glamours offset by that beautiful lighting”.

According to the expert, Meghan looks “perfectly at ease in her jaw-droppingly expensive couture gowns as if Hollywood and the spotlight are her natural home”.

She continued: “Her petite frame offset by the structure of the garments portrays her as powerful whilst unafraid of being vulnerable. She’s embodying her feminity as a modern icon,” Miranda suggested.

Inside the magazine, Meghan posed in several photographs showing a wide range of different styles. In one of the photographs, she wore a cream jumpsuit with a deep V-neck.

The expert claimed Meghan was “caught off guard” after being asked about her life with her husband Harry.

Darren said: “I noticed a sudden shift in emotion with Meghan’s body language when she’s asked about what she watches with Harry.

“She broke her pattern of looking left and right by staring up, which often means she is reflecting back on memories. The fact that she began to blink quite a lot means that the question caught her off guard.

“The previous questions were all based on something she could have prepared for, however this one caused her to change and display leakage signals with the eyes.

“It doesn’t mean she is lying about her answer, but she has clearly shifted the way in which she answered the question in relation to the emotion it’s evoked.”

Talking about the way she answered the questions, Darren explained: “It is very interesting to see how Meghan processes information. When she is asked a question, she tends to look down and to the left.

“This means she is running a tiny voice in her head called internal auditory dialogue. We all have this little voice when we’re going into certain situations, like a job interview or a social setting. That’s her way of processing the question and checking her response. She is able to do this process very fast.”