Home » Fashion » Heidi Klum Opens Up About Loving Her Body and Having a Healthy Relationship with Food: 'I Feel Happy with Who I Am' 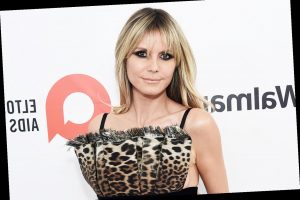 After more than 20 years working in the modeling industry, Heidi Klum has found a healthy and balanced diet that works for her.

The German supermodel, 46, is featured on the cover of Red magazine’s May 2020 issue, where she talks about her marriage to Tom Kaulitz, co-parenting with ex-husband Seal and body positivity. The star was married to celebrity hairstylist Ric Pipino from 1997 to 2002 and singer Seal from 2005 to 2014. Klum and Seal share four children: daughters Leni, 15, and Lou, 10, and sons Henry, 15, Johan, 13. She admitted that co-parenting with the musician is “sometimes hard” but said she and Seal “try as good as we can” to make things work.

“There’s always a reason why you’re not with someone any more, you know?,’ Klum concluded. “It’s not all rosy-rosy. It just isn’t. So sometimes it’s hard, but then you have to all come together as a family and sometimes everything is just like hopping on clouds. It’s just the way it is.”

END_OF_DOCUMENT_TOKEN_TO_BE_REPLACED

END_OF_DOCUMENT_TOKEN_TO_BE_REPLACED
We and our partners use cookies on this site to improve our service, perform analytics, personalize advertising, measure advertising performance, and remember website preferences.Ok