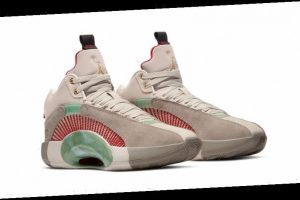 After recently revealing its forthcoming project with Manila’s very own TITAN, the team at Jumpman is further expanding its basketball portfolio with another installment next year: the CLOT x Air Jordan 35 collaboration. Official imagery of this pair springs up shortly after close-up shots of its CLOT x Air Jordan 14 release sibling recently emerged.

For this design, Edison Chen filters the court-ready silhouette with a healthy blend of neutral tones and striking accents. Textiles that form its upper alternate between brighter beige hues that swaddle the synthetic tongues, throat and collars, while a muted stone-like tone topples over its sultry suede overlays. Striking accents of bold red and jade stone green follow suit, the former of which binds to the arched cables, interior liners and CLOT-branded heel tabs, while the latter overlaps the Eclipse plate, Jumpman-branded mid-foot banner and the lower throat tabs. Additional CLOT branding is tonally embossed into the lateral heels as well as towards the throat’s bottom hit. In addition, tiny notes of golden accents maneuver their way to first set of eye stays, as well as the tongue’s logos.

Peep an in-depth look at these impending collaborative Jordan kicks and its special shoe box up above, and anticipate a launch via Nike to go down in the forthcoming months.

In case you missed it, images of the Air Jordan 1 Hi ‘85 “Neutral Grey” have surfaced.
Source: Read Full Article

END_OF_DOCUMENT_TOKEN_TO_BE_REPLACED

END_OF_DOCUMENT_TOKEN_TO_BE_REPLACED
We and our partners use cookies on this site to improve our service, perform analytics, personalize advertising, measure advertising performance, and remember website preferences.Ok