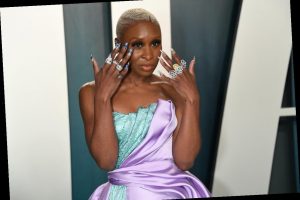 Has Cynthia Erivo single-handedly kept red carpet fashion alive amid the pandemic? Well, no—but it’s certainly sometimes felt like that over the course of the past year. The Oscar nominee established her sense of style just a month before the virus kicked into high gear, taking risk after risk while promoting the 2020 biopic Harriet. At that point, fans already knew Erivo for her self-expression; her hair and makeup concepts have always been gorgeously idiosyncratic, and she’s worn a septum ring on the red carpet for years. Between all that and the stylist Jason Bolden, Erivo is now a certified red carpet hit. See for yourself, with looks ranging from fluorescent green Valentino to swaths of Schiaparelli couture.

There was no missing Bolden’s “lucky charm” at the Golden Globes in fluorescent green Valentino couture.

Erivo subtly showed off her skivvies while in Lanvin for the 2021 NAACP Image Awards.

Erivo’s other look that evening, Valentino couture, was even more bedazzled.

Erivo was the picture of elegance at the Aretha premiere, which found her swathed in Schiaparelli couture.

“Little brown girl in white made by @versace,” Erivo captioned her custom look for the 2020 Academy Awards.

According to Bolden, he found Erivo’s mint Prabal Gurung confection just an hour before she arrived to the 51st NAACP Image Awards.

Erivo knows exactly which silhouettes and colors work for her. At LACMA’s Art + Film Gala, which she attended in November 2019, she opted for this purple Gucci gown. The addition of an embroidered corseted accent brings it to the next level.

High drama is right up Erivo’s alley. Whether it’s a pouf sleeve or huge ruffles, as seen on this Mario Dice dress, Erivo’s commitment to volume makes for a theatrical moment.

We love that Erivo isn’t afraid to try out a risky pattern. The geometric panels of this dress would look clownish on anyone else, but coupled with her chandelier earrings and blonde, short hair, it’s pure harmony.

The story on this dress goes that Erivo was getting ready for the 2019 Tony Awards and her stylists added the line of feathers along the slit of the dress at the 11th hour. It was a great decision—the cascade of plumage adds an essential dimension to the look.

When Erivo strays from her classic go-tos (floor-length gowns with long or super-puffed sleeves) the results are often magical. Case in point, this custom Thom Browne dress made especially for the actress to wear to the Golden Globes. She paired it with a standout Bulgari diamond necklace, achieving the old Hollywood look she said she was aiming for.

The fun print on this Maison Valentino dress saves it from looking too serious. The upbeat vibe was perfect for the Grammy Awards, where Erivo wore the gown.

The actress’s penchant for wild beauty looks is legendary. Erivo wore these rhinestones to the Met Gala, along with standout earrings and that septum ring.

The sunglasses are an unexpected and fierce touch to the Maison Valentino dress Erivo wore to the Governors Awards.