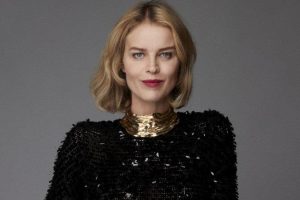 At 48, Eva Herzigová has the most impressive CV a supermodel could hope for, incorporating Chanel shows galore, more than 20 Vogue covers, campaigns for Louis Vuitton, Chopard, Dolce & Gabbana, plus, of course, those 1994 “Hello Boys” Wonderbra billboards – so mesmerising they apparently made men crash their cars.

Just before lockdown, she moved from London to Italy with her partner, Italian businessman Gregorio Marsiaj, and their three sons, George, 14, Philipe, 10, and Edward, eight. She casually refers to Marsiaj as her husband despite never having confirmed whether they have married since announcing their engagement in 2017. This strikes me as genius: you fast forward through the stress of organising a wedding and just get on with the relationship. 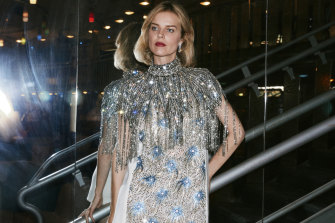 Bear in mind, too, she said her short-lived marriage to Bon Jovi drummer Tico Torres in the mid-1990s had put her off marriage for life. Married or not, she found leaving the UK difficult. “I love England,” she says. “I love the weather. I know some people complain, but Italy is a bit sticky; that makes me suffer.

“There’s been a bit of a challenge with the schools,” she goes on. “England’s academic programs are on another level – you can’t compare.” Marsiaj, though is “thrilled” to be back working for his family’s company, which makes motor-racing products, and, as Eva says again and again during our conversation, “I’m kind of in a different mindset with being part of the whole fashion mayhem, so I’m enjoying it.”

This questioning of, well, everything has been exacerbated by Eva’s COVID-19, which she’s still shaking off. “It was real; it was serious,” she remembers of the whole family falling sick in December. “Thank god we all had it together, so I had support from my husband and kids. We could cuddle and stay in our pyjamas for a month. I had symptoms forever, like forever.”

In February, the supermodel checked into the Chenot Palace Weggis medical spa in Switzerland to recuperate. It was the first time she’d tried such a facility. “That really helped me. I’ve also taken some homoeopathic stuff and I’ve been having cold showers every day.

“What works is renewal of yourself,” she confides. “It’s very debilitating when you realise how much energy you actually need to speak. It’s hard when you just can’t manage. This virus has a far-reaching effect.” She is dreading her children’s return to school and the prospect of them “not touching and hugging” their friends.

The pandemic has been, she says, “a reset for everything. The way I think, the way I dress, the way I wake up. It’s being more conscious, more kind, more accepting, more loving, more slow. There’s nowhere to rush.” There’s a sense, too, that it might have rocked, just a little, that blonde-bombshell confidence: the way she combines class and elegance with just a hint of playful sass. Even visiting the Cannes Film Festival in July was a struggle.

“It was hard, which I didn’t expect. I’ve been going every year for 25 years so it has become a kind of autopilot. This year, I didn’t have my hair done so I was suddenly lost. I didn’t know that my hair was curly and fluffy, and that it would suddenly take on a whole different shape. It made me feel self-conscious; then, I don’t like make-up. I know you have to put make-up on, but I didn’t feel like me.”

“[The pandemic has been] a reset for everything. The way I think, the way I dress, the way I wake up. It’s being more conscious, more kind, more accepting, more loving, more slow. There’s nowhere to rush.”

It’s reassuring in a way to know that even Eva can suffer a small crisis of confidence. You’d never know all this from the pictures, though, in which she poses up a storm. Once she was in front of the camera, something clicked. “It was such a weird contrast because I had felt so uncomfortable, and then suddenly I felt like the photographers were actually my family and there I was, laughing and waving and grinning like an idiot.” 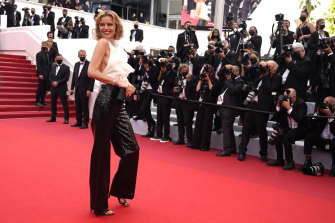 Eva walked alongside Yasmin Le Bon, now 56, Penelope Tree, 71, and Karen Elson, 42, in Fendi’s spring/summer 2021 show last year, and starred in Etro’s autumn/winter 2020 campaign. But she would rather focus on the industry’s impact on the environment than its continuing obsession with her.

“It’s the worst: people buying five dresses a day and then a new trend is up. You forget all the resources of the planet that go into these things. It’s nonsense.” Instead, she appreciates labels with high standards and admirable values. She recently bought a bag from Métier that, she says, “will last me a lifetime. It’s like an Hermès.” Eva is also a huge fan of fellow model Liya Kebede’s Lemlem label, which makes its sustainable resort wear in Africa.

Hand in hand with a newfound concern for the planet is her focus on equality. She thinks Black Lives Matter and #MeToo are “wonderful”. Of course, Eva’s opinion is especially pertinent because her career has been so laced with episodes, like that Wonderbra advert or appearances in Sports Illustrated, which we took at face value in the past and now interpret very differently. She once said that, “‘Hello Boys’ was a very powerful statement and one I always defended against feminist accusations because I think it had a very empowering, liberating effect on women.” Now it’s off limits because of an ongoing legal dispute between her and the brand.

The daughter of an accountant mother and electrician father, keen on swimming and gymnastics, Eva won a modelling contract at 16. As a result, she was plucked from Litvínov, a small industrial town in what was then Czechoslovakia, and transported to Paris. “It was a communist country and we couldn’t travel. For me, it was an opportunity to travel. I never grew up with any vision of fashion or modelling,” she recalls. “Looking back, I probably didn’t have time to develop my persona. You’re told what to do and what to wear, and be here and be there. I was very diligent and always doing that.”

Early on, she was represented by Elite modelling agency, whose controversial founder, the late John Casablancas, created the concept of the supermodel, but whose reputation was tarnished by accusations of sexual abuse of young girls trying to break into modelling. (There has been no suggestion Eva was among them.) 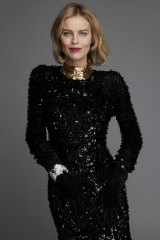 It’s not just fashion vexing Eva. She has been paying close attention to a campaign being fought back home in the Czech Republic (as it has been since 1993) to end the practice of women adding the feminine -ová suffix to their surnames. As one of the most famous -ovás in the world, she could sway the debate, but she won’t be joining in – or changing her name.

“It’s a little bit silly,” she says. “I was born with it and that’s my name, even though my father’s name is Herzig. In Parliament, they’re trying to make it a point of female and male equality, which I think has nothing to do with it. It’s irrelevant to equality.”

She is more interested in other battles – her own recovery from COVID, the happiness of her family and how to forge a new path for herself in midlife. In her 30s, she was dogged by rumours of eating disorders and drug abuse, which she vehemently denied, but she’s only recently started exercising for the first time since she was 16.

“I mean, I’m very active, I have three boys, but with COVID, not moving much for such a long time, you lose your muscle mass. I feel like I need to exercise, so we have a dog and I go for a bike ride in the park every morning. I’m not pushing it but already the idea of exercise makes me sweat because I haven’t done it for so long.

“I’m more an advocate of the philosophy that it’s all about what you eat,” she continues. “Food for me is an element of energy and a source of healing, and vice versa: food can be harmful. We eat vegetarian or vegan three or four times a week. Having boys and my husband, it doesn’t really sit well with them. My husband is promoting the idea that meat is protein and it’s very good for you, and here I am in the minority, saying, ‘No, it’s the exact opposite.’”

“Looking back, I probably didn’t have time to develop my persona. You’re told what to do and what to wear, and be here and be there.”

Eva senses more change for herself on the horizon, but she’s still working out exactly what it might mean. “I think I’m finding my voice. I’m going to be more vocal, eventually, about something. I feel something coming. I just feel that people are a bit lost. Everybody wants to be a millionaire, a video blogger with a billion fans or an influencer, and always more and more and more products.

“I just feel that there’s a missing voice; it is calling me.”

This article appears in Sunday Life magazine within the Sun-Herald and the Sunday Age on sale October 17. To read more from Sunday Life, visit The Sydney Morning Herald and The Age.