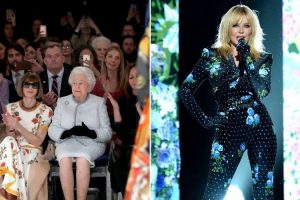 She did but see his designs passing by once, but the Queen is responsible for launching the career of British designer Richard Quinn, who has teamed up with the US king of streetwear Tommy Hilfiger on a capsule collection.

In 2018 the monarch, more at home at Ascot Racecourse than the front row, made headlines when she attended Quinn’s London Fashion Week show, two years after he graduated from the prestigious Central Saint Martins fashion school. 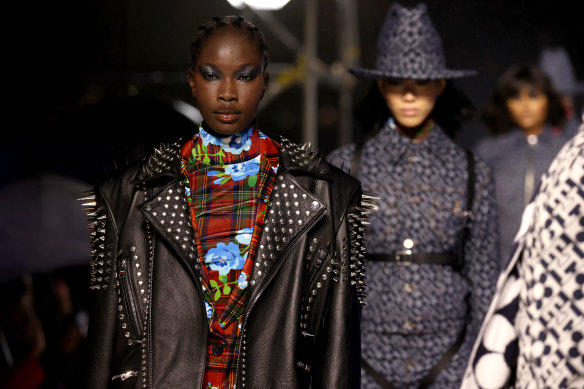 The Tommy Hilfiger and Richard Quinn collaboration on the runway at New York Fashion Week.

While the Queen continued to wear colourful suits by her dresser Angela Kelly until her death, Quinn’s exuberant florals and mismatched prints evolved until they caught the eye of Hilfiger.

“I was at the British Fashion Awards and Kylie Minogue was performing and she and all her dancers were wearing these incredible outfits,” says Tommy Hilfiger, on the eve of his New York Fashion Week event showcasing the collaboration.

“Kris Jenner was at my table with my wife and all the women were saying how much they wanted to wear the pieces, so I was like ‘who is it by?’ When I found out it was Richard Quinn, the guy who had the Queen and Anna sitting in his front row, I decided to keep an eye on him.”

When the collaboration was proposed to Quinn, who has explored the fetish world with fitted silhouettes, gimp masks and riding crops since his brush with royalty, the reserved Hilfiger was initially surprised. After rifling through the Hilfiger archives, Quinn was relieved to find common ground with Hilfiger, who for decades has provided a uniform for preppy US teenagers and aspiring rappers. 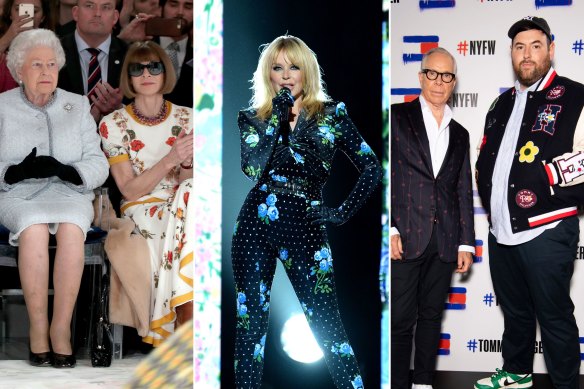 “I love to do these sorts of projects where you can dive into the archive and then bring two worlds together,” Quinn says. “It’s been really fun. There were these amazing ’80s varsity jackets, kilts and really obscure things that when you first think of Tommy don’t immediately come to mind.”

The sometimes raunchy result pushes Hilfiger’s baggy trousers and denim into new territories, with the kink-infused collection bringing an immutable smile to the founder of the business, purchased by Phillips-Van Heusen for $3 billion in 2010.

“We’ve collaborated with Gigi Hadid and Lewis Hamilton, but never really with a real designer,” Hilfiger says. “We knew it would be incredible.

“It’s very different from what we do, but it’s got the flavour. It’s done with Richard’s eyes. I love it.”

“I certainly didn’t feel restrained working with Tommy and the Tommy Hilfiger team,” Quinn says, while stroking a jacquard towelling top with built-in gloves. “The reason we collaborate is because of what we can learn from them and what we can bring to the table.

“They were pushing us and we were pushing them right back. In fact, they suggested so many things that were amped up even further.” 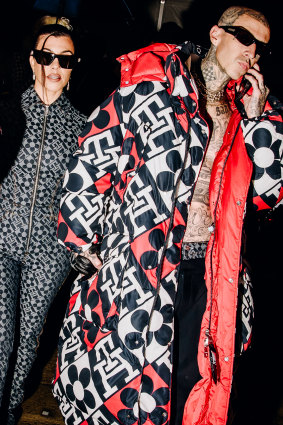 No pushing was required to enlist celebrities, with Hilfiger and Quinn both aware of the power of bold-faced names, royal or otherwise. Reality star Kourtney Kardashian, drummer Travis Barker and singer Jon Batiste were in the front row at the New York Fashion Week show, wearing pieces from the collaboration.

“You reach so many people who have millions of followers by working with pop icons and cultural icons,” Quinn says. “Just being part of that content keeps your brand relevant.”

Hilfiger has been harnessing the power of celebrity for much longer, having launched his brand in 1985.

“I always said that FAME; fashion, art, music and entertainment, would be the engine behind my brand,” Hilfiger says. “When I started out I didn’t have the money for advertising, so I figured that if Britney Spears, Lenny Kravitz, David Bowie, Mick Jagger and Snoop Dogg would wear my brand, then others would follow.

“We’re selective about who we bring into our world,” Hilfiger says, looking directly at Quinn. “But when it works, it works.”