Home » Fashion » How the Team Behind Collina Strada Preps for NYFW

How the Team Behind Collina Strada Preps for NYFW 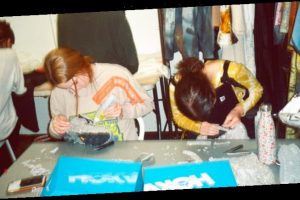 “If I were a vegetable, I’d be broccoli,” says Hillary Taymour, the creative director and designer behind sustainably minded fashion brand Collina Strada, on the fourth day of the week-long final preparation for her fall 2020 show, “And if this collection were a smell, it would be moss.”

It’s a warm winter day in New York and her interns are busy sewing digitally printed fabric and sequins onto Hoka sneakers, a partnership that’s been going on for multiple seasons. The general mood is calm and inviting: Models and friends have been in and out all week to be fitted for garments and eat popcorn and dark chocolate peanut butter cups while dancing to the ’80s and ’90s dance music that reverberates throughout the studio.

Per usual, the show was centered around being more mindful of mother earth. The show was titled Garden Ho, a double entendre: “We should love our gardens as much as we love each other,” Taymour says.

During makeup tests with makeup artist Ali Smith, dirt was used as eyeliner, yellow eyeshadow made to look like pollen and leaves placed on the faces of the models. “The makeup is alive during the show,” Smith says.

After participating in the CFDA Fashion Fund competition last season, Taymour is back to her funky roots: colorful prints, cropped denim and tie-dye hoodies with rhinestone accents. She even added a new print of purple and pink horses inspired by her fond but uncomfortable childhood memories around the animal. “Spring felt like me,” Taymour says, “but this collection is more me.”

A lot of Chinese food was eaten by the team, with an emphasis on blueberries and tofu for Taymour. Laughter echoed throughout the office, and hugs for her dog Powwow, who made an appearance on the runway, were given about every five minutes. It was really a family affair, with a general sense of happiness and like everyone involved had a say in what was going to happen during the show.

One of the main materials used this season were hundreds of t-shirts Charlie Engman, who started as Taymour’s intern ten years ago and has since become her design partner and fabric designer, brought back from a recent trip to Ghana, where 15 million items of donated clothing end up at the Kantamanto secondhand clothing market in Accra every week, more than a third of which end up as landfill waste. (In the show notes, Taymour wrote that “Ghana has, in effect, become one of the global north’s fashion trash cans.”)

Engman and Taymour repurposed the shirts into frilly dresses worn with sparkly sneakers and Swarovski crystal encrusted garden tools to match. “People who make things have the responsibility to know every aspect of what they are doing,” Engman says.

Taymour and Engman have been working on this collection since their last show, and other than the emphasis on sustainability, the message was to make sure things remain fun and lighthearted. With the planet in crisis and the fashion industry still behind when it comes to inclusivity and sustainability, this collection was made to prove that we can all come together in different ways to make sure that we take care of our planet. Her message last season was ‘There is no planet b.’ This season’s is: “WHEN WE CONNECT WITH NATURE, WE CONNECT WITH EACH OTHER.”

The casting process was simple and unconventional. Models were asked to not bring ‘books’ or wear heels (heels are “oppressive,” Engman says)  and make sure to do their best Zoolander style “walk-off.” A selection was made based on a positive personality and who felt most like a “Collina girl.” There’s a usual cast of characters which include well-known models like Hanne Gaby Odiele, who opened the show, but there are also friends and people who have been modeling in her shows for years now.

Paige, Taymour’s assistant and “secret best friend,” spends about half her time in their New York factory making sure that everything goes as planned. Patterns are made at the studio, brought to the factory for production and then draped and tacked back at the studio. All of the fabrics are recycled or made out of rose sylk, a cellulose fiber made from rose bushes, and used completely. Even the remaining scraps create ribbons and bows for Collina Strada’s newly introduced line of bags.

Taymour has been making clothes for as long as she can remember. She always wanted to do something that felt more meaningful, rather than just continuing to add to the constant excess of garments made by different brands each year. Color is important, laughter is important and maintaining a chill vibe is super important whenever she prepares for a show. It’s all love.

The evening before the show, everyone at the studio is wearing Collina Strada and some are drinking glasses of Malbec.

By 9 p.m., Taymour is drinking a glass while finalizing the show music and adding last touches to the makeup and collection board. She wants to make sure everything turns out as perfectly as possible, but she believes in herself. Her being stressed is something that is rarely seen, she says, because she is a very internal person. She relieves stress by hugging her dog and painting sneakers to be worn in the show. “There’s no reason to be frantic,” she says. “It’s just a fashion show.”