I Am Fully Geeking Out Over Kaia Gerber's Vintage Warner Bros. Sweatshirt 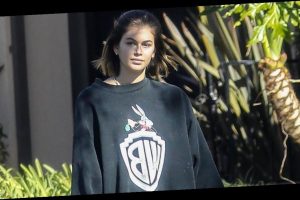 I Am Fully Geeking Out Over Kaia Gerber’s Vintage Warner Bros. Sweatshirt

Kaia Gerber has been spending time with Euphoria actor Jacob Elordi in Santa Monica and West Hollywood, CA, grabbing smoothies and going on walks — you know, typical couple stuff. In case you forgot, they confirmed their romance on social media with an Elvis and Priscilla Presley Halloween costume back in October. But is it fair to say that the vintage Warner Bros. sweatshirt Kaia’s been wearing for their adventures is cooler than any iconic costume? I’m officially obsessed with her lived-in, oversize throw-over, which looks like it could’ve belonged to her dad in the early ’90s.

Kaia’s worn it with gray leggings twice now, recently finishing off the look with a brown leather shoulder bag, high socks, and (hopefully for a quick errand) thong flip-flops. But Kaia also posted an Instagram just two days prior, wearing the same sweatshirt on the beach with her rescue dog, Milo. For that occasion, she wore mom jeans and her classic Chuck Taylors. Needless to say, I’ve been on the hunt for vintage film sweatshirts ever since, because my stay-at-home wardrobe could really use one. Ahead, see Kaia repping Warner Bros., then shop for a similar style to call your own.

END_OF_DOCUMENT_TOKEN_TO_BE_REPLACED

END_OF_DOCUMENT_TOKEN_TO_BE_REPLACED
We and our partners use cookies on this site to improve our service, perform analytics, personalize advertising, measure advertising performance, and remember website preferences.Ok