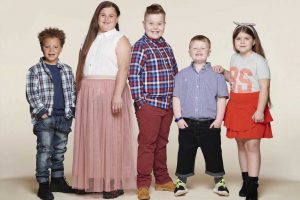 HERE are five child models who are standing up for bigger kids everywhere.

The youngsters are all plus-size, and their parents struggle to find clothes for them on the high street, despite childhood obesity being a growing problem. 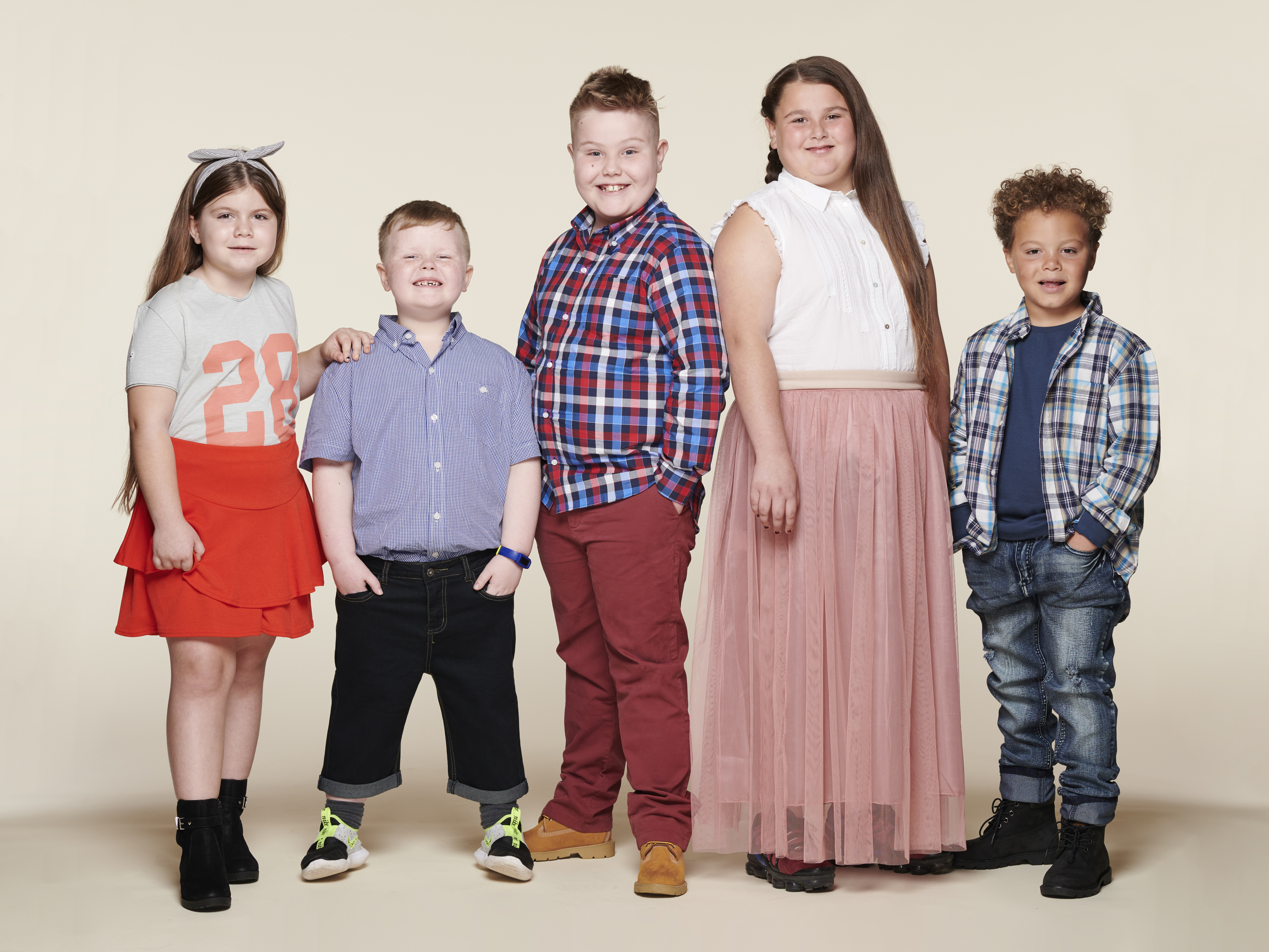 Experts say many kids will have put on weight in lockdown, due to more screen time and restrictions on organised sport.

In September, The Sun came to the rescue of ten-year-old Leaha Emmins, who wears a dress size 22 and couldn’t find school uniform in her size.

We put her in touch with plus-size company Sturdy Kids, based in Cheltenham, Gloucs, and now Leaha and four other children have been picked to model the store’s range.

Founder Vanessa Fowler, who set up the firm in 2010 after struggling to find outfits for her own plus-size child, said: “We’ve seen a 30 per cent increase in demand since the pandemic.

“Interest has never been greater. We’re not hiding the obesity crisis, we’re helping kids feel better about themselves, which in turn will help them get active and healthy.”

Here the children and their parents talk about what it means to finally fit in.

MUM Chloe, 33, a former sales manager from Grays, Essex, says her daughter Lola weighs 6st – almost twice the average weight of a girl her age – and has been ­bullied. Chloe says:

"As Lola swished her new orange skirt in the studio, I shed tears of joy. This was the boost my Lola needed to take on bullies, who label her fat, and be ­positive about her self-image. 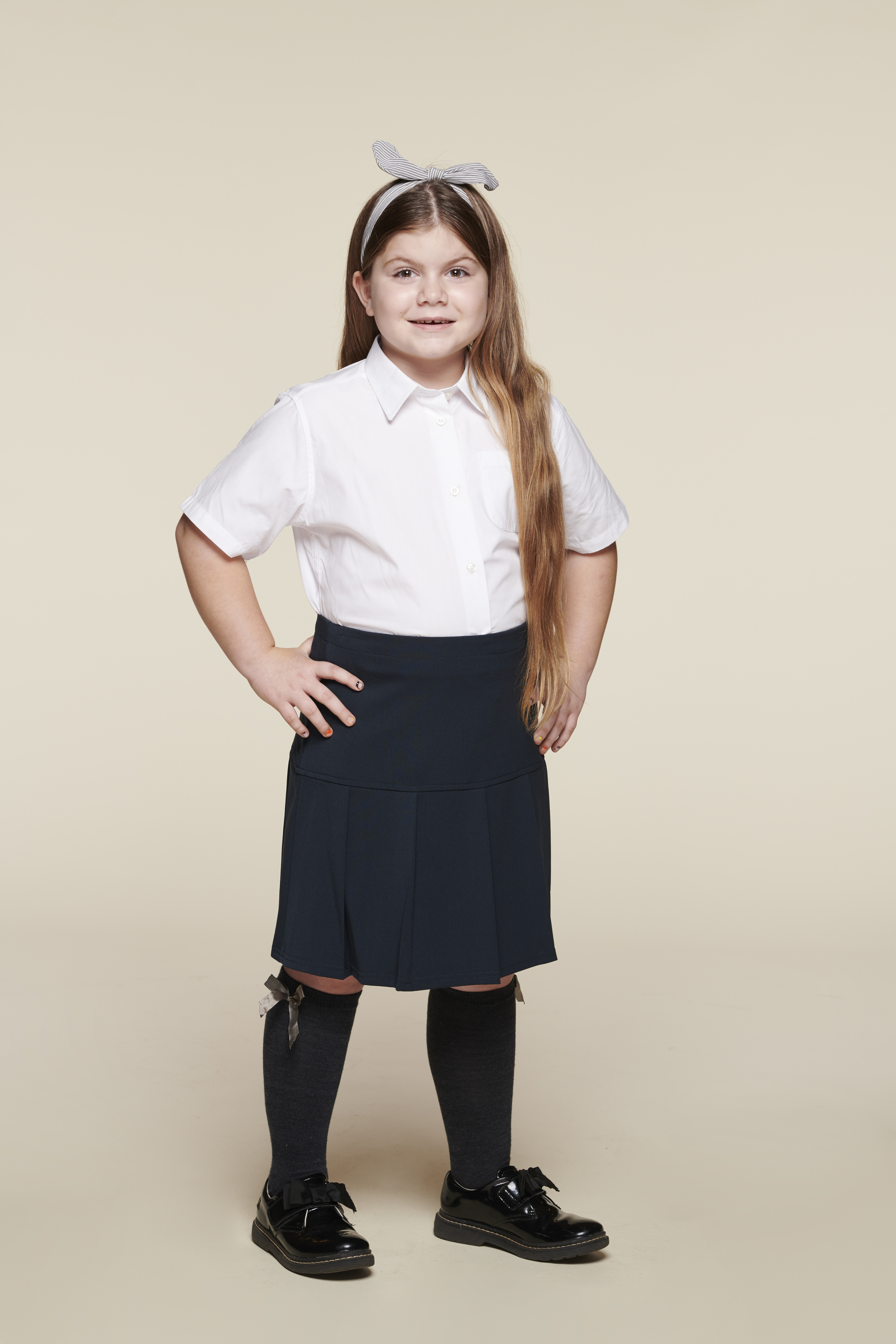 "Shopping with Lola on the high street usually ends in frustration and anger. I haven’t been able to buy school skirts let alone party skirts because she is big for her age.

"We have tried size 12 women’s skirts but they are too ‘sexy’. Lola is taller than average at 3ft 11in and takes after her grandad, who was 6ft 6in. She put on weight in lockdown but she isn’t sitting behind a screen eating ­chocolates.

"She goes to dance class, plays football and loves riding her bike. I am doing everything I can to help Lola eat well and stay fit. These children are so brave to model these clothes because they are standing up for other bigger kids."

LOLA says: “My new clothes make me feel like all my friends. I’m helping people and it’s fun.”

DAD Nathan, 40, a plasterer, was bowled over to see A-Jay, who weighs 7st 7lbs, wearing jeans for the first time. A-Jay lives in Hyde, Gtr Manchester, with his dad, mum Lisa and siblings Lilly-May, 12, and Caleb, ten months, who are both average size. Nathan says:

"A-JAY usually hates having his picture taken, so seeing him confidently striking poses, grinning ear to ear, was life-changing. We have struggled for two years to find a plus-size uniform on the high street. The regular trousers won’t go over A-Jay’s thighs. 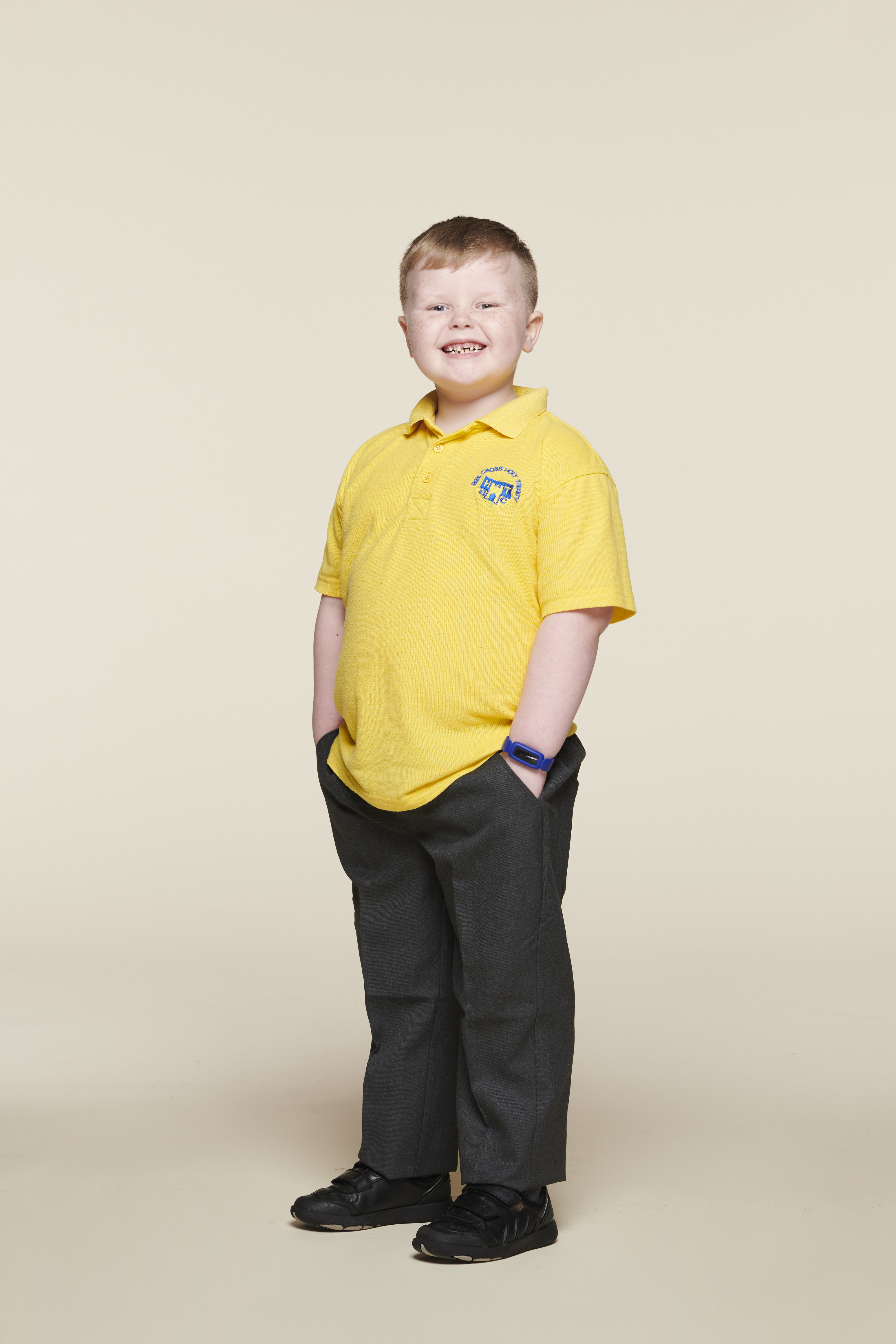 "Lisa has to hide her tears from him – she feels like she is failing him. When A-Jay met the other kids for The Sun’s photoshoot, he realised he wasn’t alone.

"We are trying to help A-Jay lose weight. He does 12,000 steps a day, plays football and goes swimming, but he is a picky eater. The reality is some kids will be plus-size and we need to accept that lockdown has probably caused some of them to put on weight.

"To wear school uniform like his friends and not be ashamed of talking about the issue is part of solving the obesity crisis."

A-JAY says: “I love my new clothes. I feel super-cool. I don’t want kids like me to be ­bullied. We can be cool too.”

MUM Sarah, 40, has been in tears trying to find school trousers to fit Harry, who weighs 8st 7lbs – twice that of an average child his age. Sarah, a ­marketing consultant from Northampton, East Mids, says:

"SEEING Harry smiling for the camera with other kids who are big like him was a huge, emotional moment. 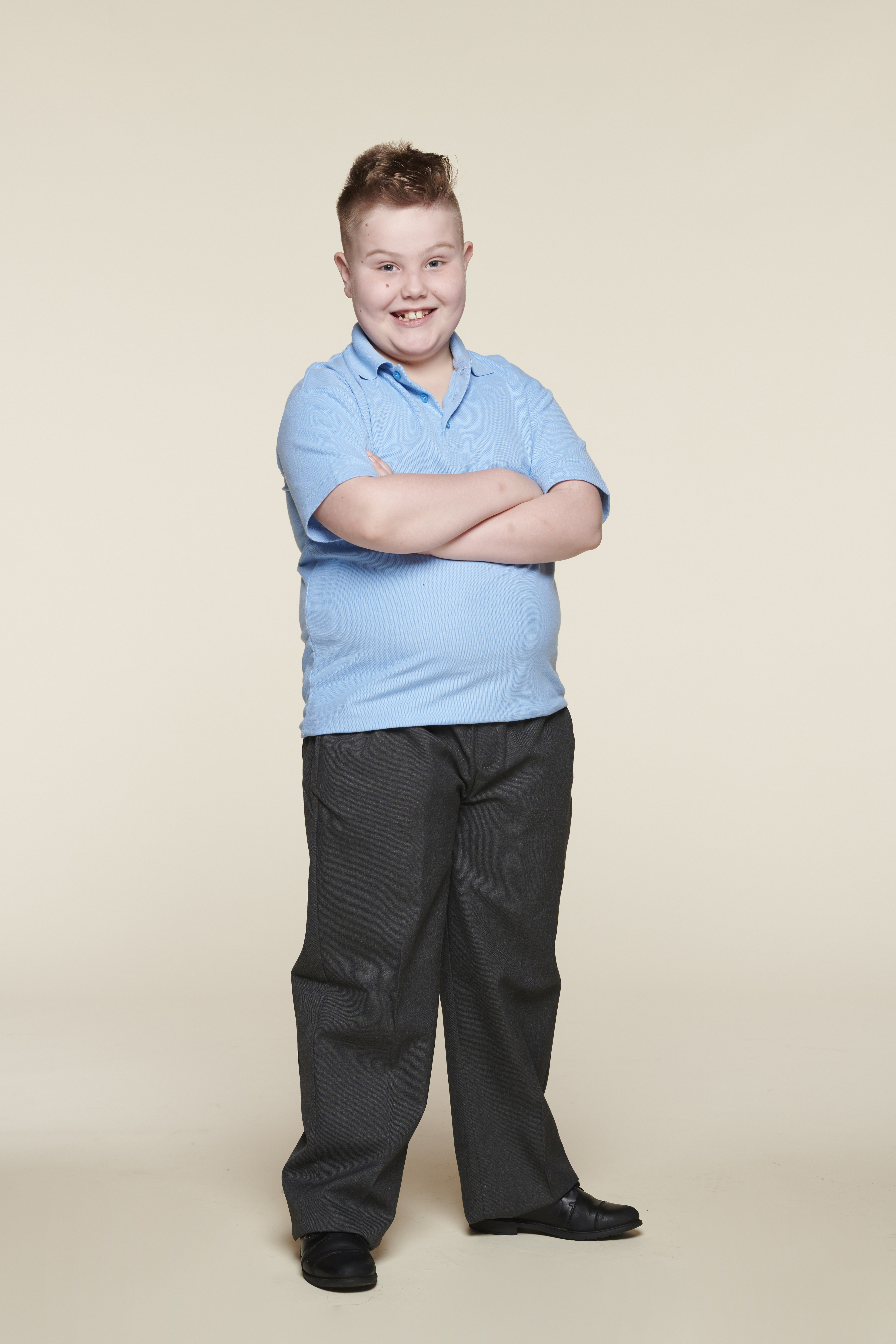 "Harry has always been a big-boned boy. For the past three years, he’s had to wear ­joggers for school because nothing else fits. Clothes shopping is hell because there just aren’t clothes for kids his size.

"He gained weight in lockdown because he wasn’t able to do team sports. Now he’s started doing mixed martial arts and plays basketball. He eats healthy food – he’s not chowing down on burgers. I do worry about obesity and we are doing everything we can to make sure Harry eats well and gets fit.

"Modelling these clothes has given his confidence a big boost. We need more specialist clothing companies for bigger kids. By giving larger children clothes that fit, we are giving plus-size children the same respect as average-sized kids."

HARRY says: “I love my new clothes. The trousers and shirts are the coolest. All kids deserve clothes that fit.”

DAD Wayne, 41, says the family’s story in The Sun provoked much debate after Leaha, who wears a size 22 and weighs 11st 9lbs, appeared in the paper highlighting her battle to find a uniform.

Wayne, a plasterer, shares care of his three kids with Lorraine, 41, a cleaner, in Helston, Cornwall. He says: 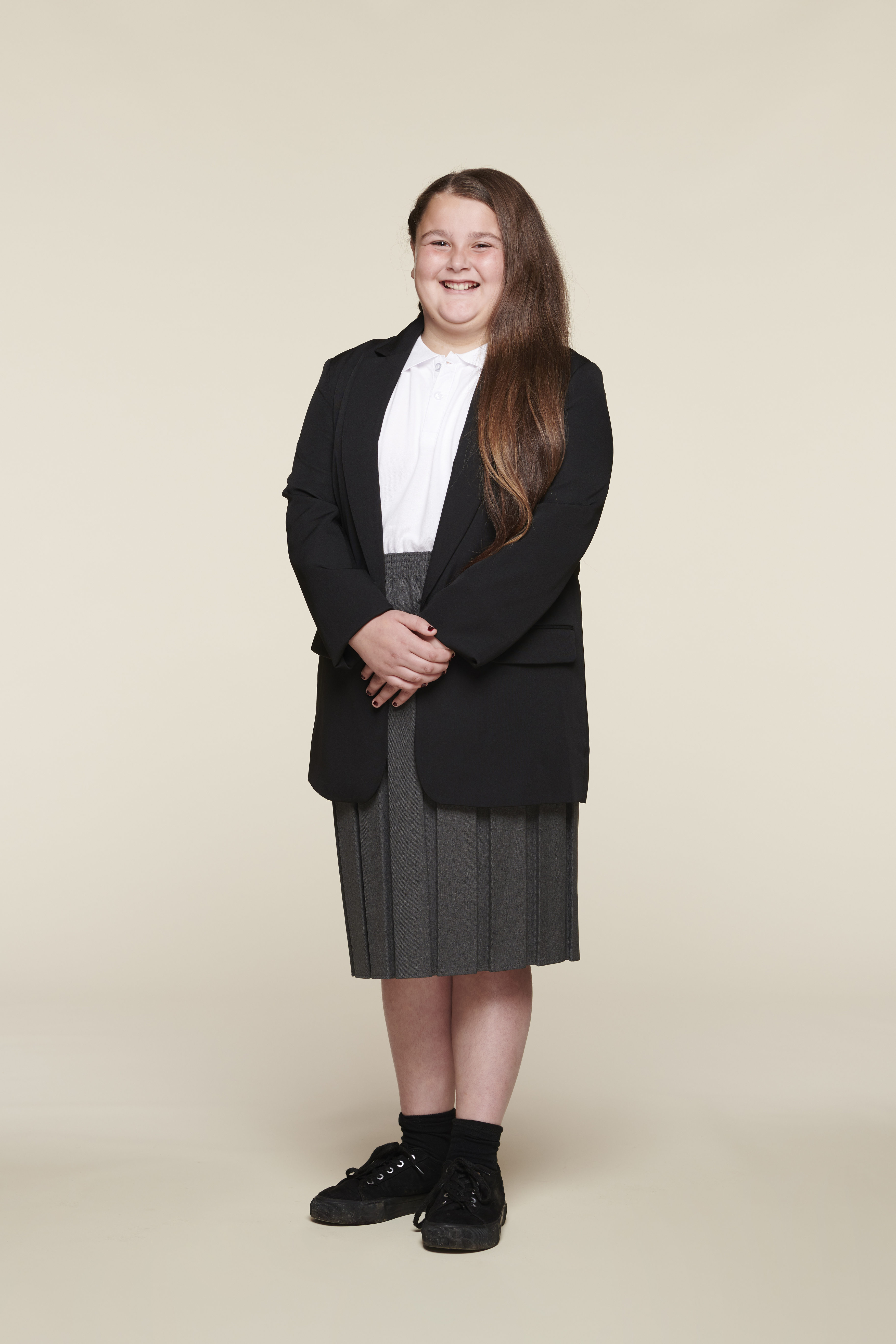 "WHEN we first spoke about Leaha, some people were horrible and I was gutted they weren’t trying to understand the issues associated with childhood ­obesity and the impact of the pandemic.

"Every child deserves to have clothes that fit, no matter what size they are. It’s critical for their self-esteem. This is the first time Leaha has had age-appropriate party clothes that fit. She loved the party skirt and top. She didn’t want to take it off, which tugged at my heartstrings.

"She has always been a big child, and she is bigger than her half-sister Jade and sisters Teeana and Ria. She is always active, she walks to school and helps me with jobs around the house. But she is a big eater, and she did gain weight during lockdown. I’m so proud of Leaha for doing this."

LEAHA says: “I felt like a princess and that people were looking at me differently. I want to do more to help other kids like me.”

"Kal’el takes after his dad, Neil, who is a teacher. ­People mistake our son for a ten or even 12-year-old. School uniform shopping left me in tears because the trousers on sale on the high street wouldn’t fit. 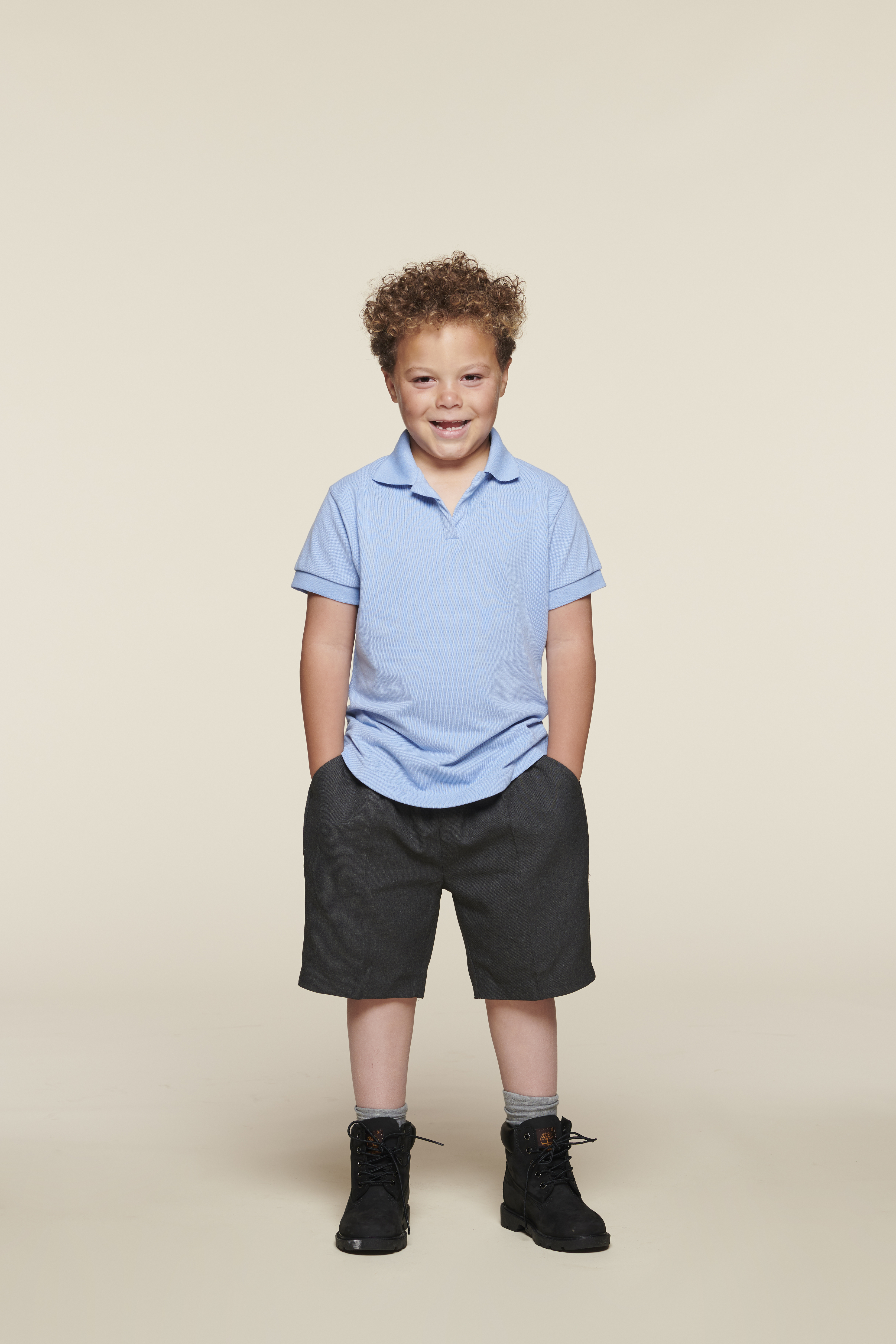 "He put on weight in lockdown, but he still wants to look trendy. So when we had the chance to model for The Sun, I knew it would help him feel good about himself.

"He loves the trousers and being able to wear jeans that fit properly. Providing clothes for bigger children isn’t celebrating obesity – it’s about empowering them so they can change their lives.

"Kal’el plays football twice a week, he swims and walks to and from school. He did put weight on during lockdown when he couldn’t play football. But we eat healthy food as a family. He doesn’t deserve to be  bullied for his size."

KAL’EL says: “I love my properly fitting ­trousers and new uniform. They make me feel super-proud. These are my happy clothes.”

Weight needs to be handled sensitively

CHILDREN have got bigger over the past few decades. In Year 6 at school, one child in three is overweight or obese.

The trouble with being overweight, especially as a youngster, is that it can lead to lasting physical and emotional damage.

There’s also a stigma attached to being overly large, and bullying is common. This means that weight issues need to be handled sensitively. But they must be handled.

A weight problem does the child no favours. The sensible approach is to encourage more exercise and eat healthier foods. Meals should be served in child-sized portions, though unfortunately there’s no firm guidance on what this size is. Snacks and sugary drinks may need to be limited.

Screen use needs attention too as it takes time away from healthier activities such as sports and exercise. There’s lots of advice and recipes for all the family on the Change4Life website.

Some medical conditions are linked with excess weight in children. It’s wise to check with the GP if a child has been overweight since babyhood, or has other symptoms as well, such as low mood.