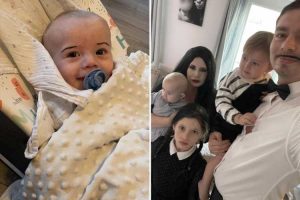 HALLOWEEN is all fun and games until you find yourself scrubbing at the fake blood and thick makeup that just won’t budge days later.

Well, that’s what happened to one mum, but she wasn’t scrubbing at her own face – it was actually on her baby. 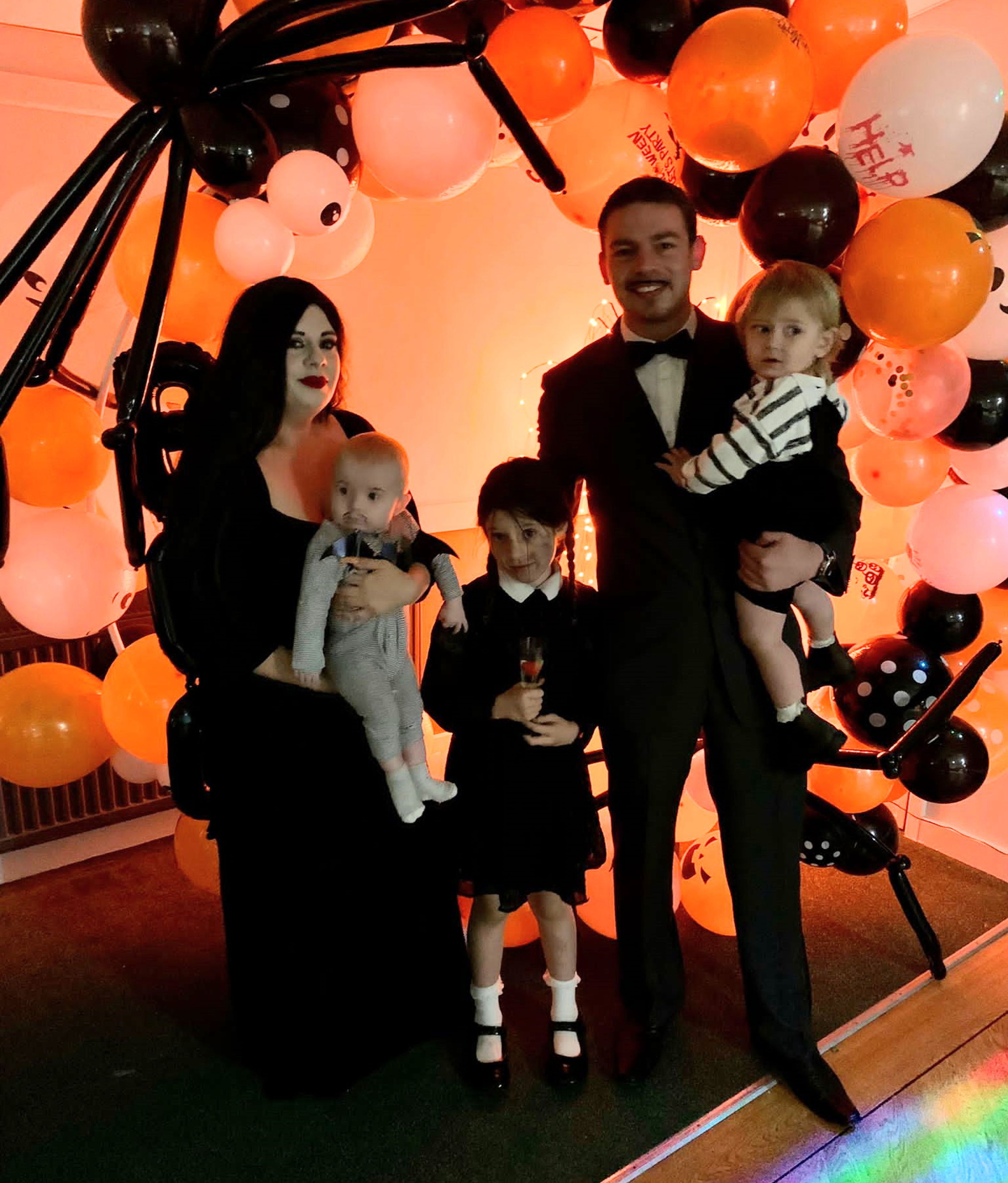 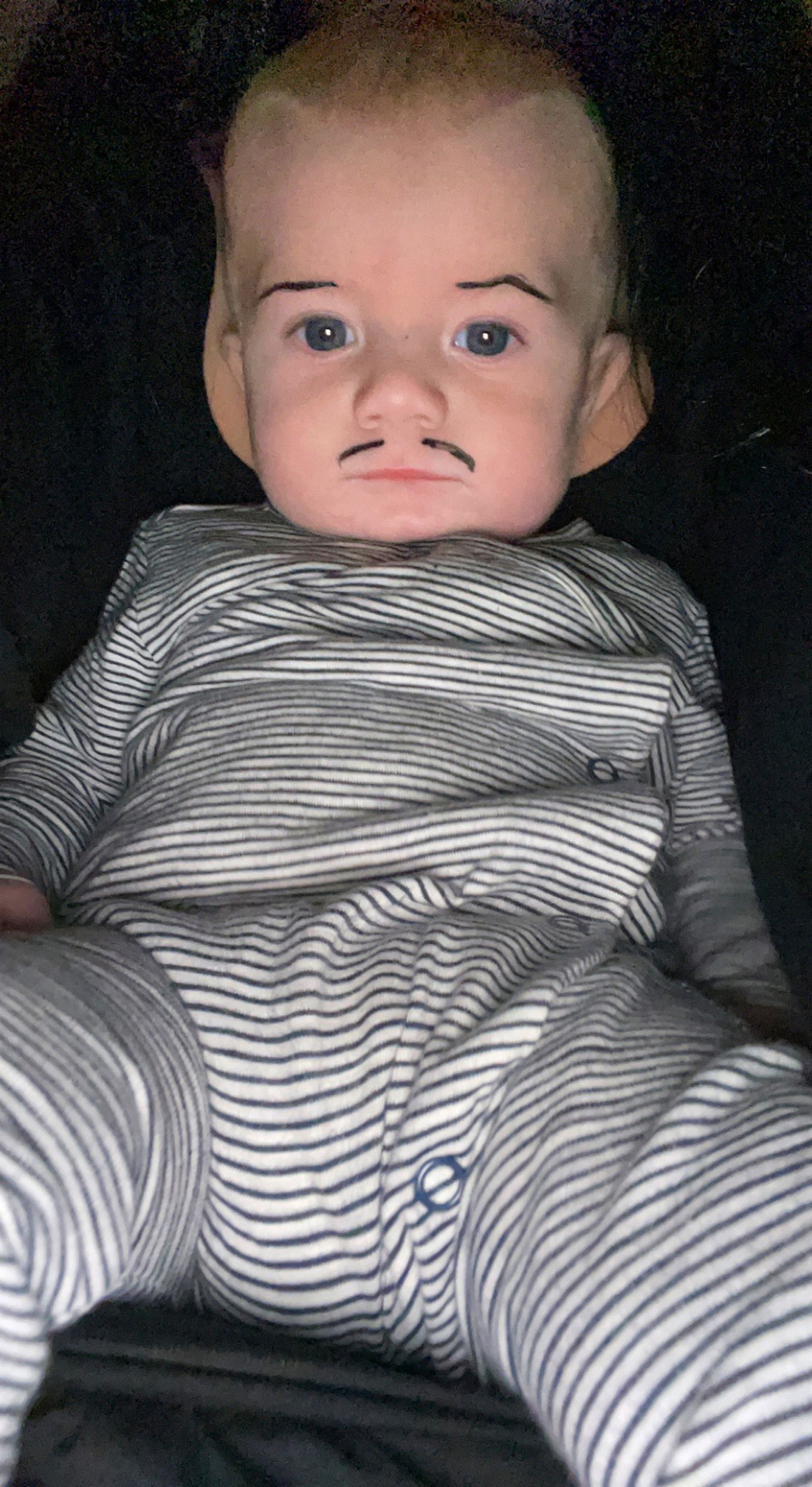 Chloe Sullivan, 30, proudly rocked up to her brother's Halloween party last week, with her entire household dressed as the Addams Family.

The mum-of-four covered herself in white face paint and donned a black wig to transform herself into Morticia.

Her partner Liam Dowd, 26, dressed as Gomez and their oldest daughter Esme, seven, went as Wednesday.

The office and laboratory manager then dressed up two-year-old Aida as Pugsley, and six-month-old Vinnie as baby Pubert Addams.

In order to achieve Pubert’s iconic look, she whipped out her magnetic eyeliner to draw eyebrows on Vinnie – safe in the knowledge he wouldn't be able to rub them off that night.

But the next day as she was trying to scrub the hilarious-looking eyebrows off the tot, she was horrified to find they wouldn't budge, with the black eyeliner clinging to his 'delicate, fine' baby hair.

Chloe has been dousing the rogue brow in everything she can find but it just won’t budge.

In a hilarious TikTok video, which has racked up more than 70,000 likes and 524,000 views, Chloe explains she is still trying to free little Vinnie of his striking new look.

Chloe, from Snodland, Kent, said: "I just can't believe it.

“In my head I really thought I was doing something clever by putting it on with something he couldn't rub off.

"A week on, we've still got half an eyebrow.

"My brother and his wife had a Halloween party on Friday.

"On the Saturday morning, half of his 'tache had come off in his sleep.

"I wiped his moustache off and then tried an eyebrow but it wasn't budging.

"It was like glue all stuck in his eyebrow.

"I thought I'd give him a bath and it'd be off by that evening but it wasn't. Then on the Sunday it still wasn't coming off.

"I covered him in baby oil, baby lotion. I took so many pictures.

"Luckily, he doesn't go to childcare and I would have had to go do the school run, but because I unfortunately caught covid, the school are picking Esme up.

"I'd have definitely got funny looks if I'd have taken him to school with his eyebrows like that."

Chloe had already been around the family with her magnetic eyeliner, which she uses to stick on false lashes, when she finally got to Vinnie.

Plant operator Liam had used it to draw on a moustache while Esme had some on her eyes as eyeliner.

While their faces were easily cleaned, little Vinnie is still branded with them as Chloe frantically works through her bathroom cabinet to find things to restore his blond brows.

Chloe said: "My brother said 'if you come, you have to dress up'. We wondered what we could go as as a whole family and decided on the Addams Family.

"Not a lot of people seem to know but the Addams Family have the little baby Pubert in the second film.

"We had Pugsley, my eldest daughter went as Wednesday then we dressed Vinnie, my youngest, as Pubert.

Next year it's bin bags all round, no make-up and just masks

"Esme just had white face paint and the black eyeliner on, but it was just on her eyelids so it came off.

"I then sprayed her hair black. I didn't put any makeup on Aida because she can't sit still for a second.

"I didn't want to use my eyebrow pencil because Vinnie could just rub it off and it could go all over his baby grow.

"I used my magnetic eyeliner because I use it all the time and it comes off really easily off my eyelids.

"Magnetic eyeliner is put on like an eyeliner then the eyelashes have tiny magnetics. You stick the eyelash on and it goes on straight away.

"For days I was trying to get it off and he still has half of one on now.

"I tried a cradle cap exfoliator and absolutely nothing has budged it. 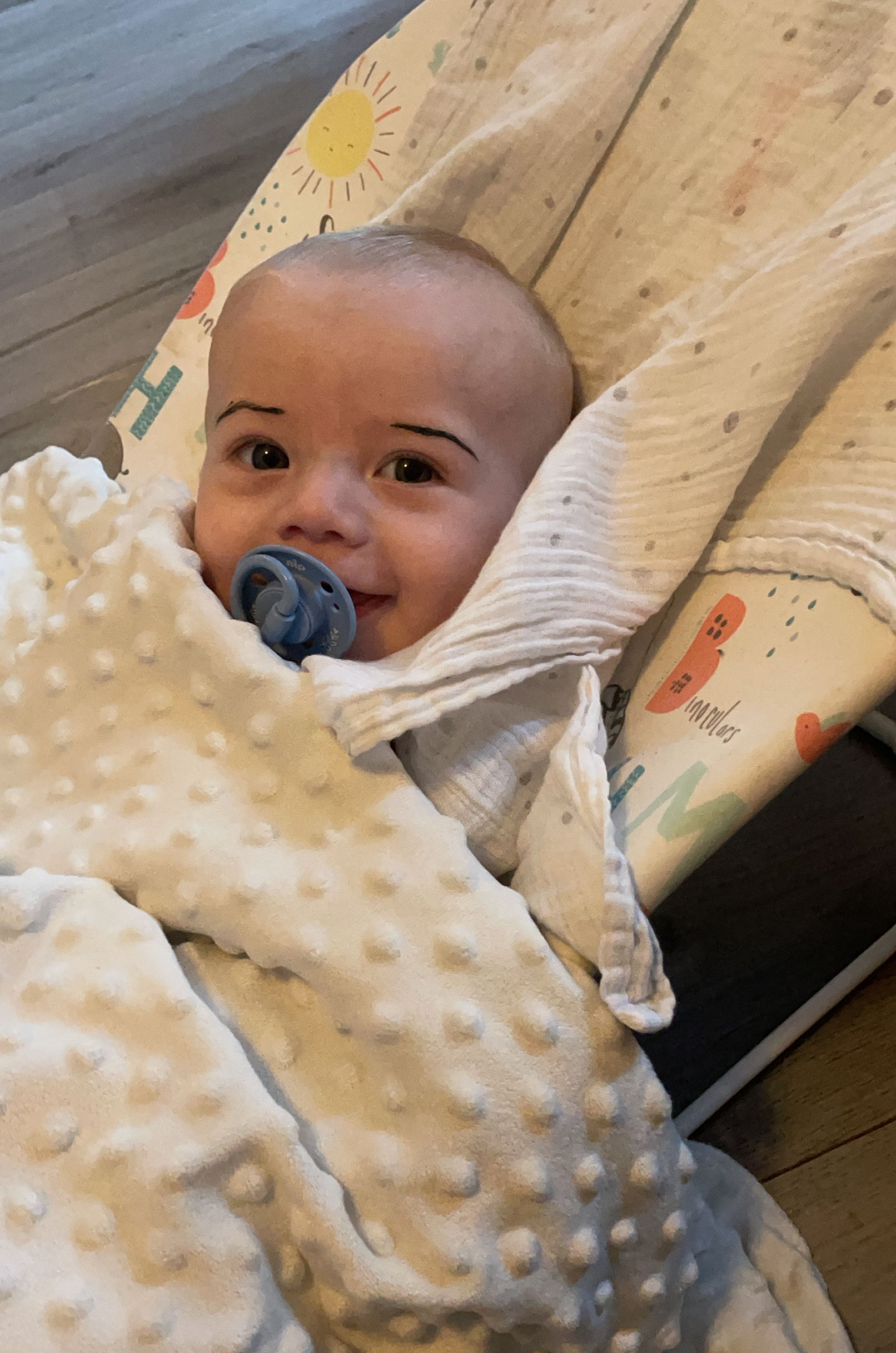 "Liam was like 'what the hell have you done?' He'd put it on his moustache and had to really scrub it to get it off.

"Where his stubble was coarser, it just came off, whereas Vinnie's hair is so delicate and fine.

"In the end, I managed to get one off. I soaked him in baby oil while he was asleep and picked it.

"It was bright red so I thought 'oh gosh, I can't do the other one yet'.

"I left it overnight and now he's got half of one left so I'll finish that when he goes to sleep."

Despite the outfit malfunction, Chloe claims everyone commented on their creative outfits on the night while TikTok users all laughed at her video showing Vinnie's new look.

Chloe said: "When we went to the party, everyone commented and said we looked really good in it.

"We were the only ones to go as a family. Some people went with their little ones as vampires and they dressed as Day of the Dead and things.

"It's abnormal for me to be very white because I tan all the time. My sister-in-law said she couldn't wait to see me as Morticia because I don't think I've been as pale in my life.

"Online, everyone thinks it's hilarious and love it. They all see the funny side to it.

"Next year it's bin bags all round, no make-up and just masks." 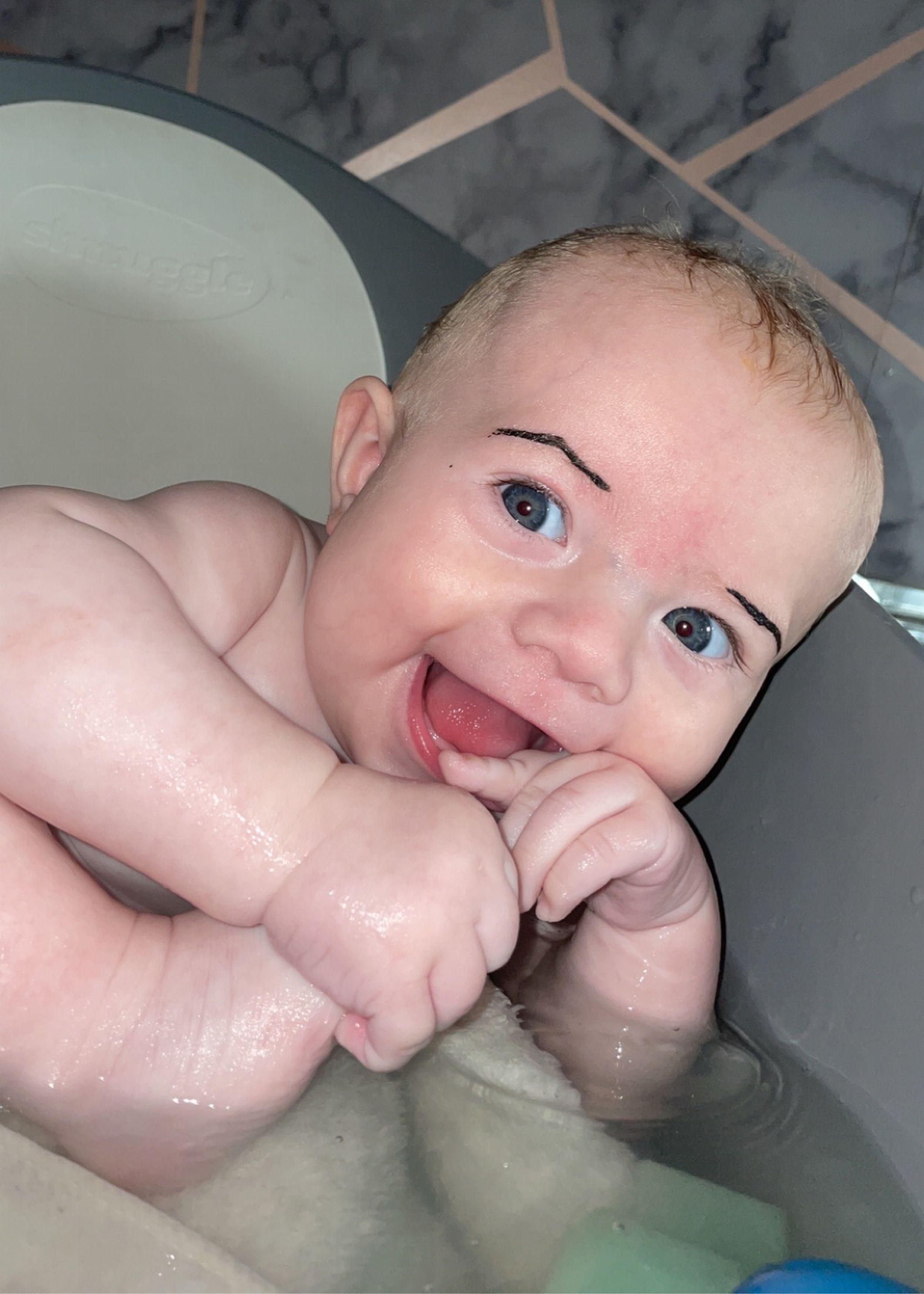 Meanwhile, woman shares easy hack for getting stubborn fake tan off and all you need is baby lotion.

Also, I started my baby beauty business with £40 – now it’s making £1m a year and we’re so rich my husband’s quit his job.