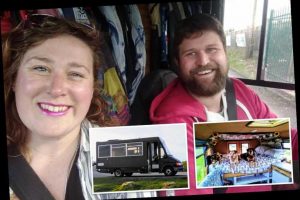 A COUPLE decided to ditch the comfort of their home and live on a bus after splashing out £2,400 on a minbus.

Karla Molony, 36, from Bournemouth, lives with partner Gary, 34, and their three dogs and a cat – but says life on the road is stress-free. 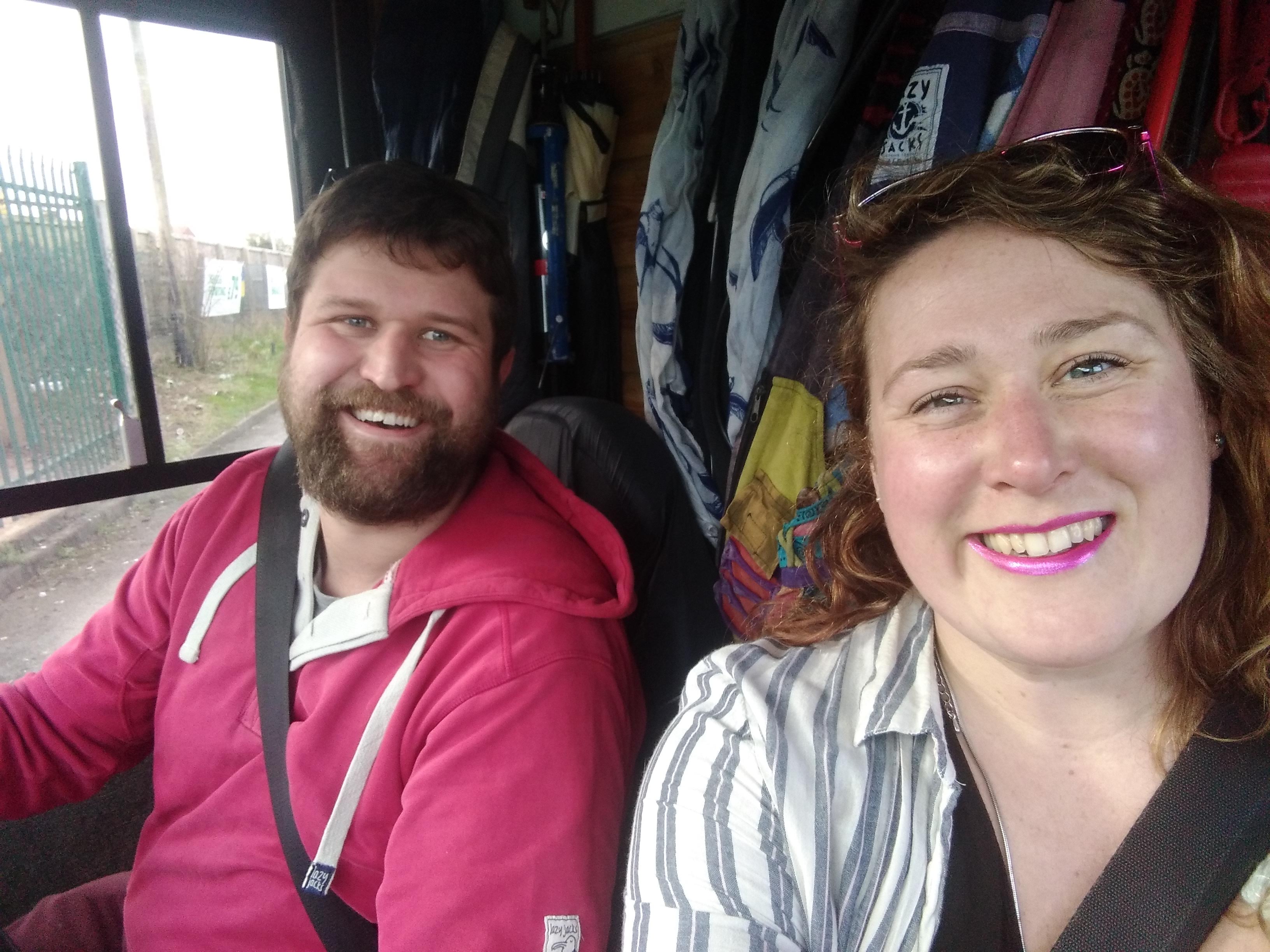 Here, Karla reveals what drove her to live off grid…

“As steam poured from the engine, our van shuddered to a halt. My heart pounded – if anything happened to the bus, we’d be without our home.

“I first considered alternative ways of living after splitting from my then-husband at the start of 2017.

“That August, I was still living in the tiny flat in Bournemouth that we’d bought together when I met Gary, a supermarket delivery driver like me. We hit it off and, a few months later, decided to move in together.

“Gary was renting and I couldn’t afford to buy out my ex, so we put the flat up for sale and started looking for a new home.

“It was a struggle with three dogs and a cat, and we soon realised that rent and bills were going to cost at least £1,500 a month. I’d always fantasised about living off-grid, so I started reading blogs about cheap ways to do it. 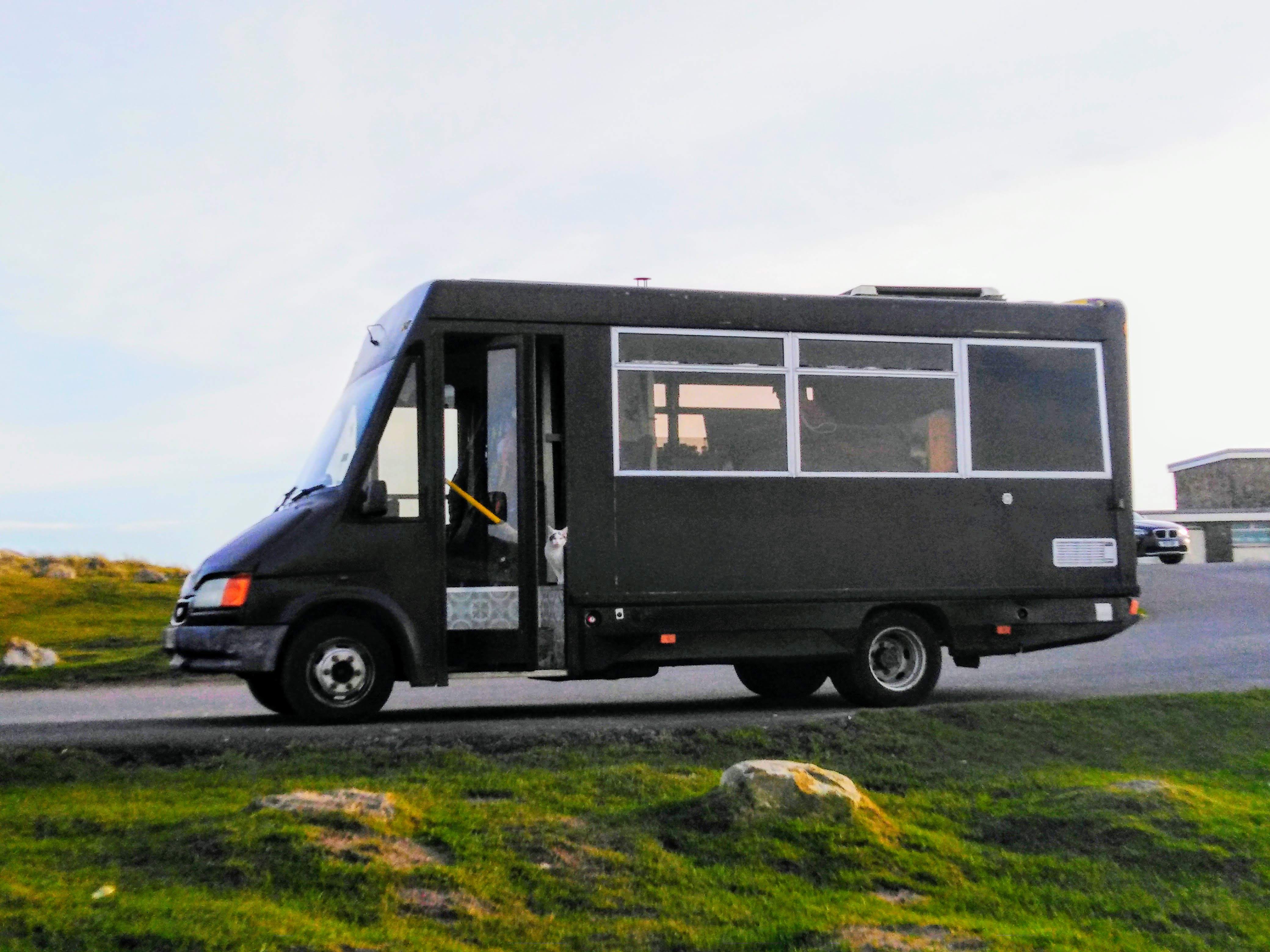 “It needed a lot of work, so my dad let Gary and me live in his caravan on his driveway while we converted it. We spent £6,000 on a bed, shower, compost toilet, washing machine, solar-powered fridge, woodburner and kitchen, which Dad helped us install.

“My friends and family already know I’m a bit kooky, so they weren’t surprised at our plan.

“On August 13, we set off, excited but nervous. We’d taken a couple of weeks off work to drive along the Dorset coast.

“At first, sleeping on the bus was strange, but I felt safe with Gary and the dogs, who slept on the sofas, and it was worth it to have a glass of wine under the stars.

“After our holiday, we headed back to Bournemouth to park up and go to work, going exploring in the van in the evenings and at weekends, stopping along the beach and in quiet country roads. 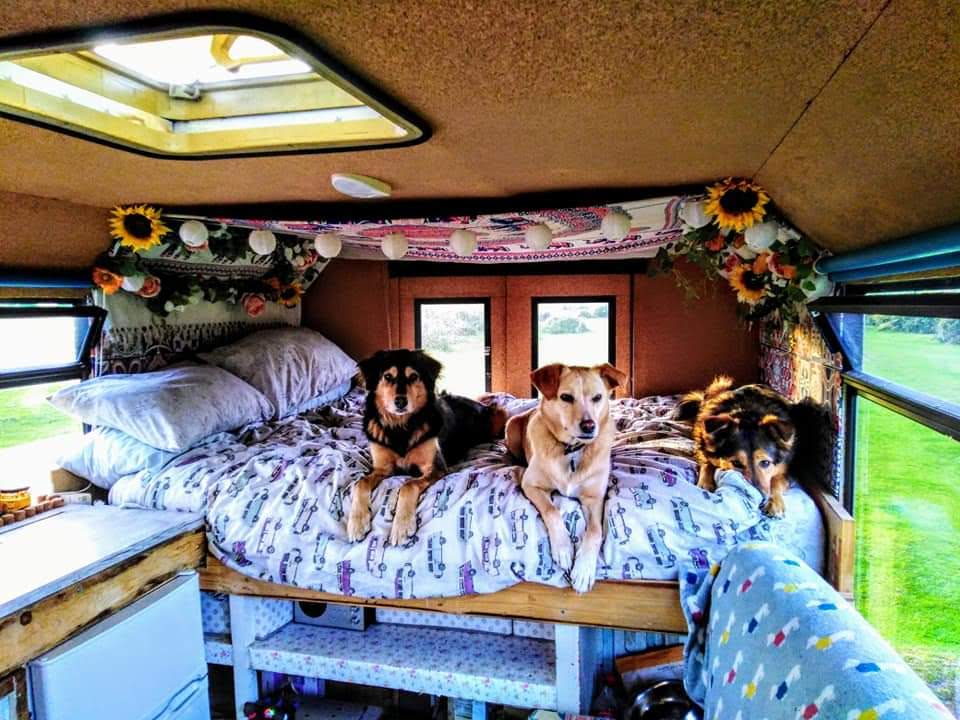 “Our expenses were 40p a day on refillable LPG gas for cooking, hot showers and washing-up, and £10 a week on fuel, and it was usually free to park. Our weekly food bill was £30, and I’d cook roasts and lasagne in the tiny kitchen.

“The main challenge was sourcing water, but petrol stations generally let us top up for free.

As winter kicked in, Gary and I stayed cosy in front of the wood burner, watching Netflix. We used the wood from fallen trees, and builders also gave it to us for free.

“In November, we quit our supermarket jobs, and started doing flexible takeaway delivery and cleaning work.

“As we were saving so much on rent and bills, we were able to go on holidays to Iceland, Majorca and Amsterdam. We also travelled to UK festivals to sell ice creams from the van, taking us up and down the country.

“Some of my best memories are of watching the sunrise on beautiful beaches, such as Ogmore-by-Sea in Glamorgan and Polzeath in Cornwall, happy in the knowledge I had no bills to pay.

Life on the road is stress-free, and the most we have to worry about is breaking down – which has only happened a few times.

“The worst part is the lack of privacy with the bathroom, which only has a shower curtain for a door, but it’s a small price to pay for freedom 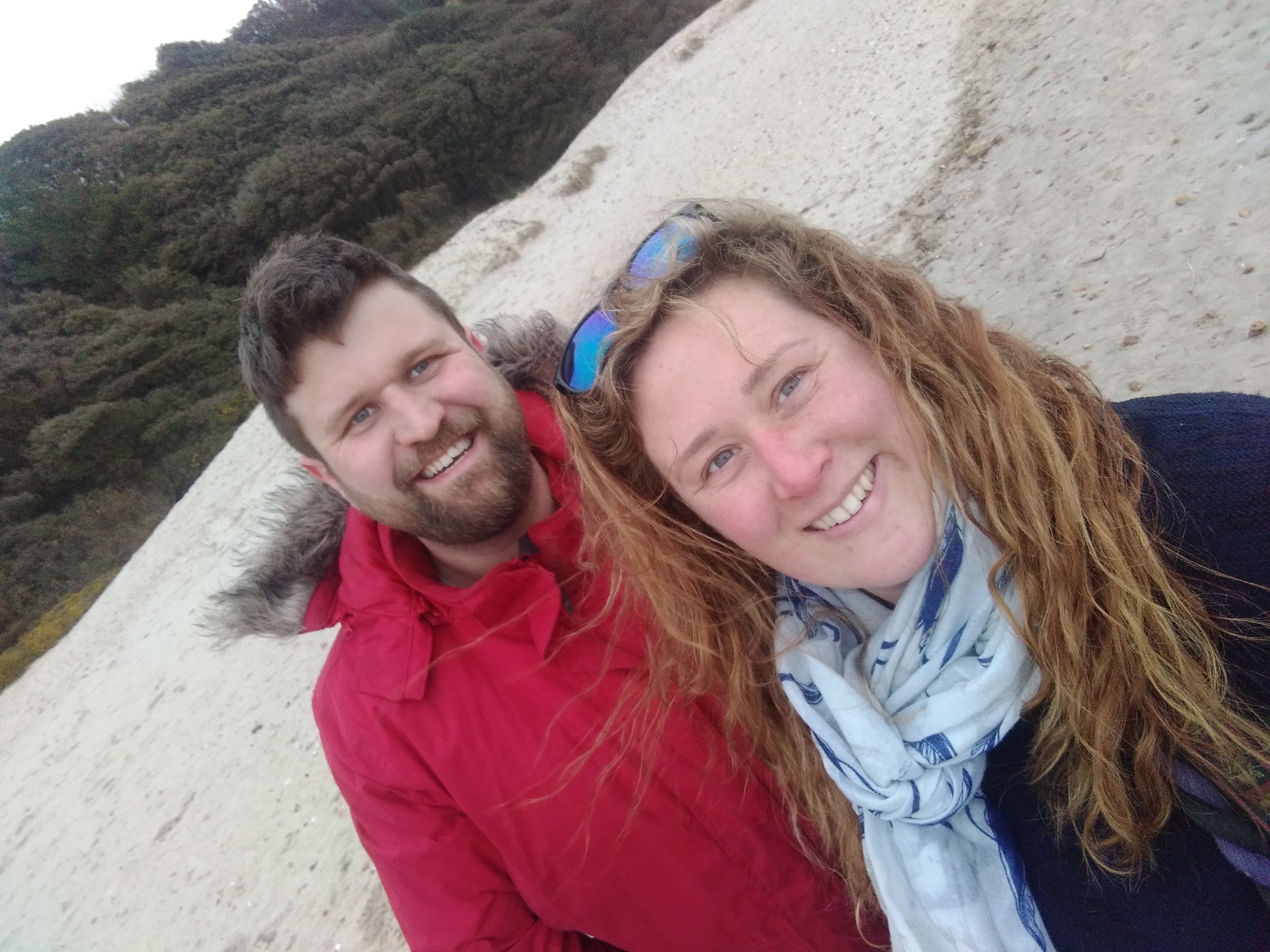 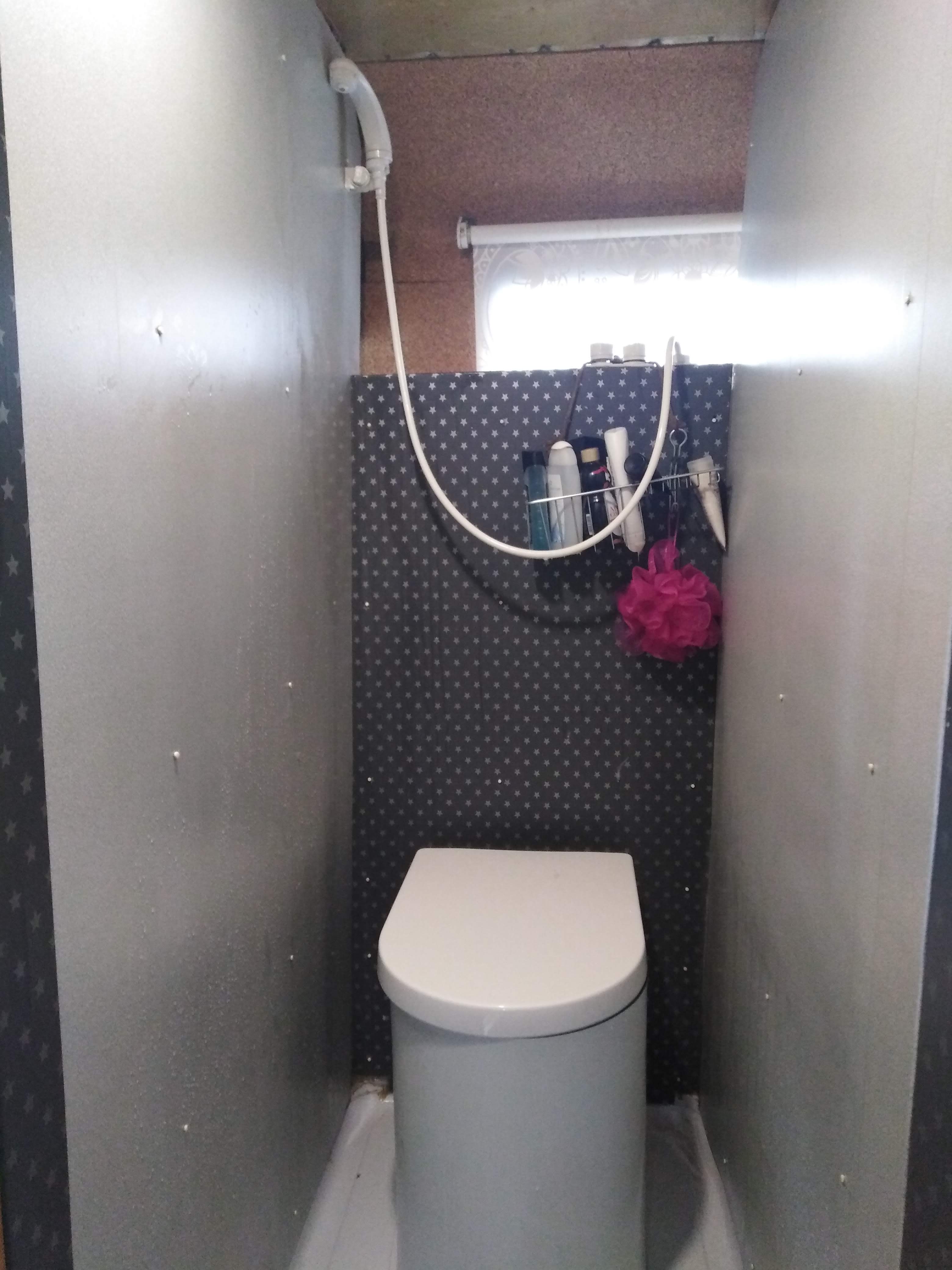 “ I’ve never felt unsafe in my surroundings, and if we did, we’d just drive somewhere else.

“Without the worries of normal life, Gary and I never argue – and we’ve spent over two years in a tiny space together. It’s freeing to be so spontaneous, flipping a coin to see where we will go.

“It’s in storage in Bournemouth while we convert it, and we’re fitting wind turbines, a rain water filter and solar panels. Neither Gary or I want to have kids or get married, and our dream is to buy a plot of land and live on a double-decker bus there off-grid. I don’t think I’ll ever buy a house again.

“Since the pandemic started, we’ve been delivering meals on wheels to elderly people while parked up in a spot in the New Forest.

“We’ve avoided the stresses of lockdown, and been happy in our little bubble. I would recommend this way of living to anyone who’s fed up with the modern world. We live in the moment, and appreciate our lives more than we ever have before.”

Around 75,000 people are currently living off-grid in the UK.*