SAWING planks of wood to build herself a bed frame was not the way Amy Nicholson saw her life going.

With her job as a freelance marketing manager kiboshed by the pandemic, she’d decided to leave her rental flat, move into a £10k Mercedes Sprinter van — and live life on the open road. 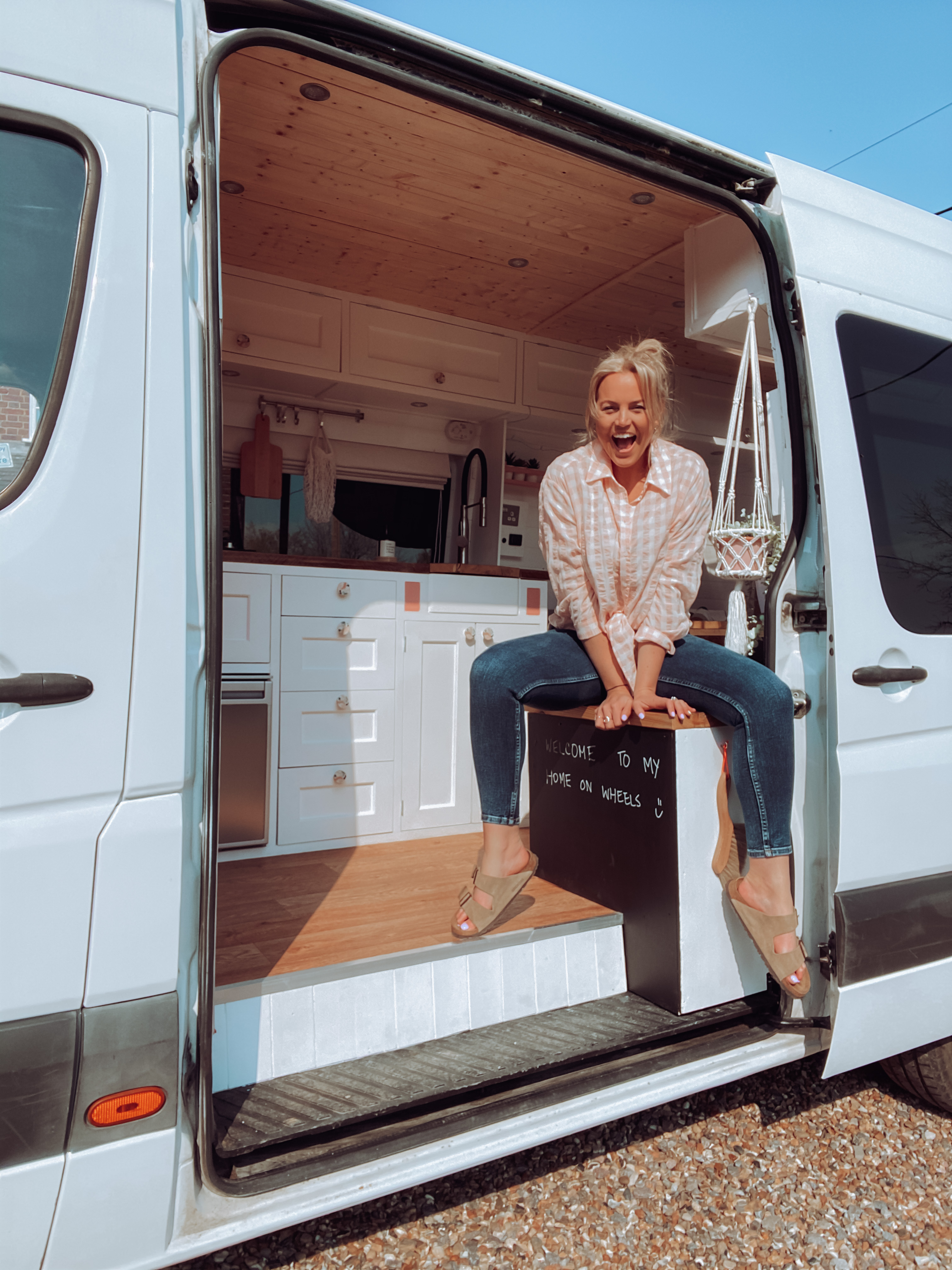 Amy, 34, from Tunbridge Wells in Kent but currently living in Newquay, Cornwall, says: “I’m saving £1.5k a month on bills and rent. I have no overheads, relying entirely on solar power and paying pounds to live on campsites, where the water is free.”

Amy is not alone in joining this booming lockdown trend. As house prices in the UK rose 13.4 per cent in the past year — the highest pace of growth in 17 years — potential first-time buyers were forced to look for alternatives to getting on the property ladder.

As a result, campervan sales were up 150 per cent last year and searches for van renovations surged by 2,000 per cent, according to motorhome rental company Camptoo, as millennials looked for alternative ways to live.

Before the pandemic, Amy was saving to buy her first home — but when lockdown hit, her work dried up and her income dwindled. 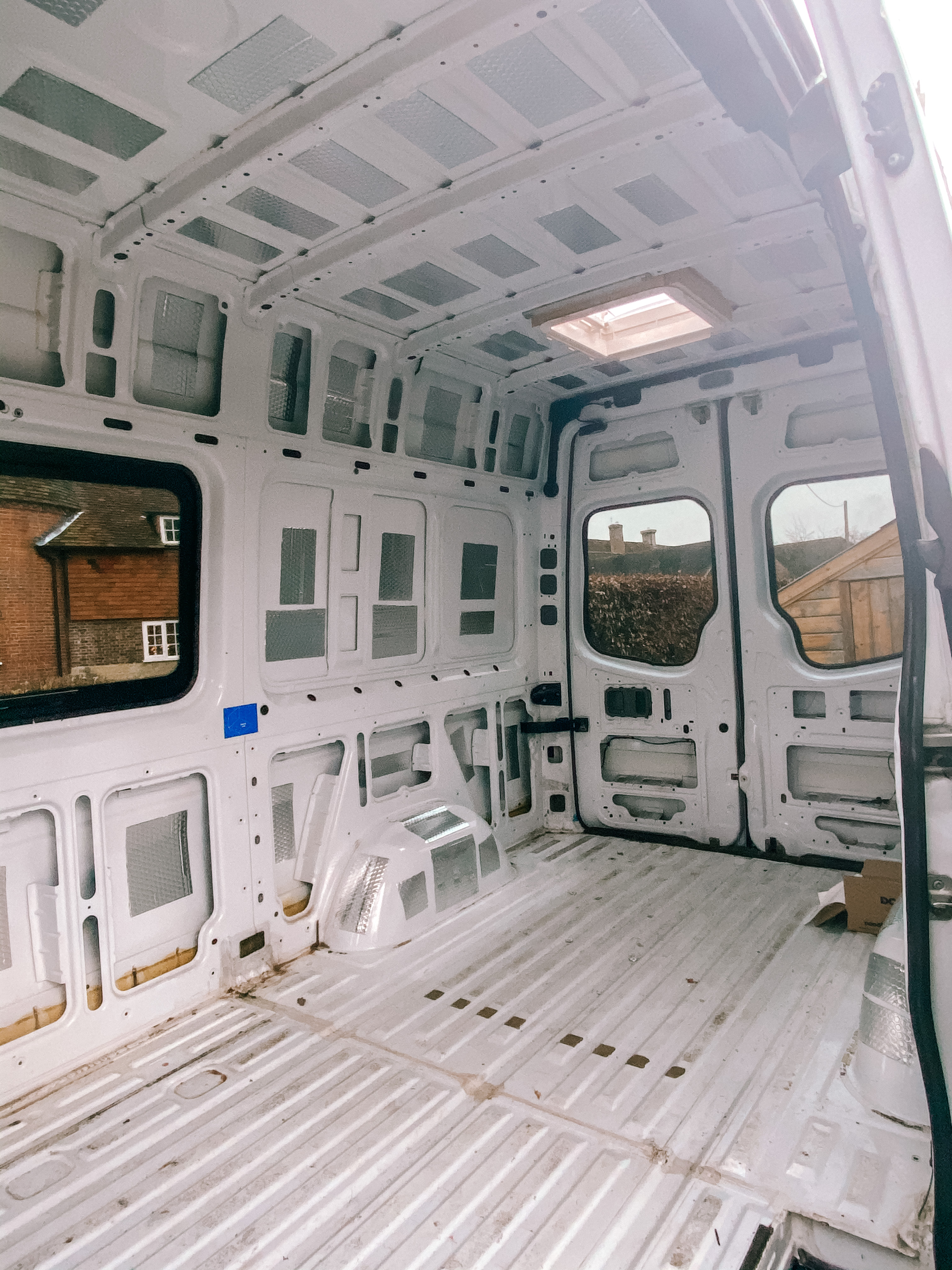 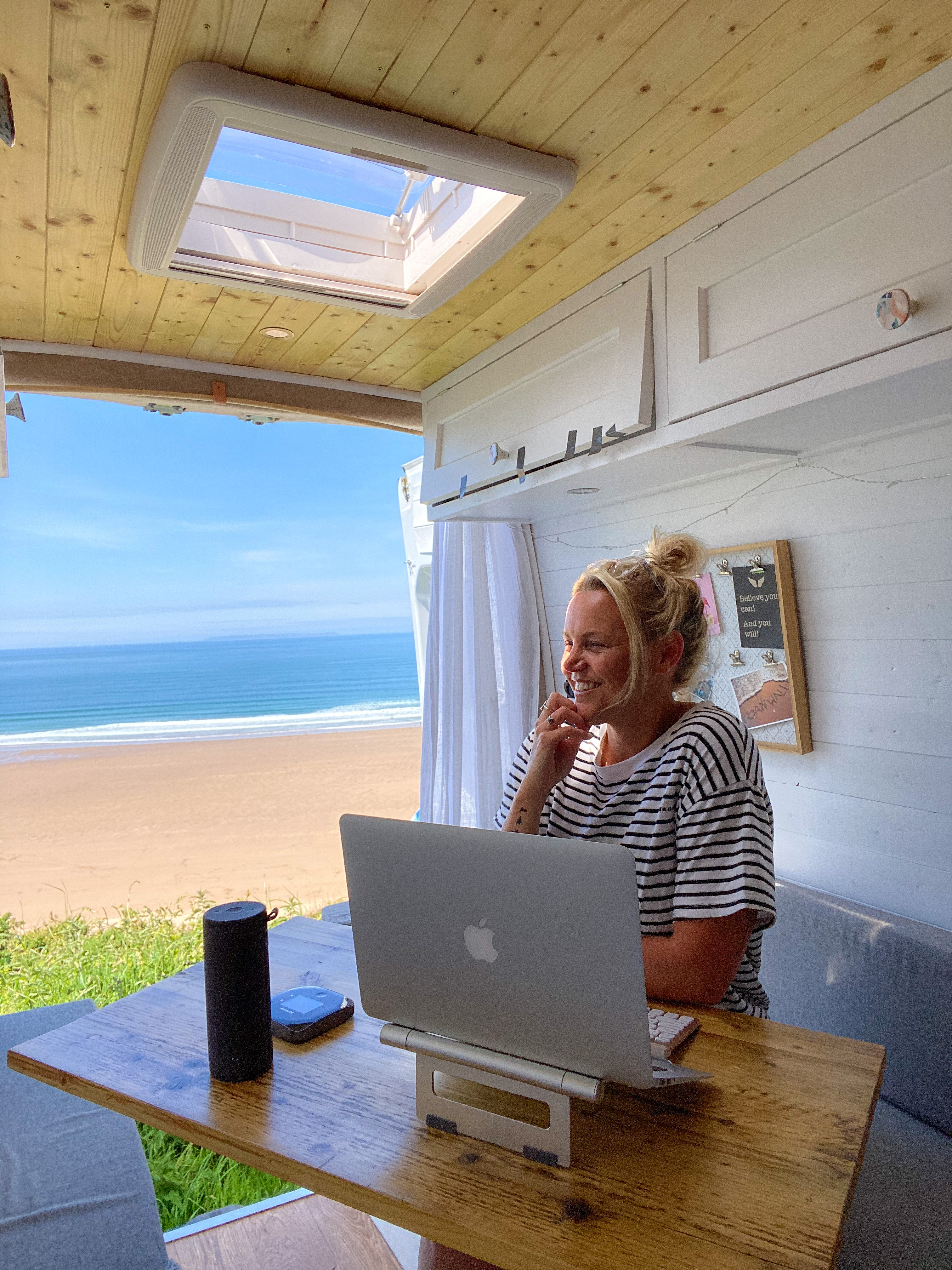 Left with just £90 Universal Credit a week — and with monthly outgoings of £1,500 — she had no choice but to move back in with her retired parents Martin, 61, and Sally, 59, in May last year.

She says: “I was so disappointed, but there was no way I could afford to live how I had been and my dreams of home ownership were out of the question.

“When I moved back in with my mum and dad, I was in a bad place mentally and financially, which took some time to recover from. I felt as though I had lost a lot, however I didn’t feel like a failure as it was a result of the pandemic.

“I’ve always loved camping and liked the idea of a nomadic lifestyle, so when my dad suggested buying a van, I jumped on the idea. On Instagram, under the hashtag #vanlife, I discovered a community of people living like that, so in May 2020 I sold my car and dipped into my £5k savings to buy my own second-hand van from a dealership in Leeds.” 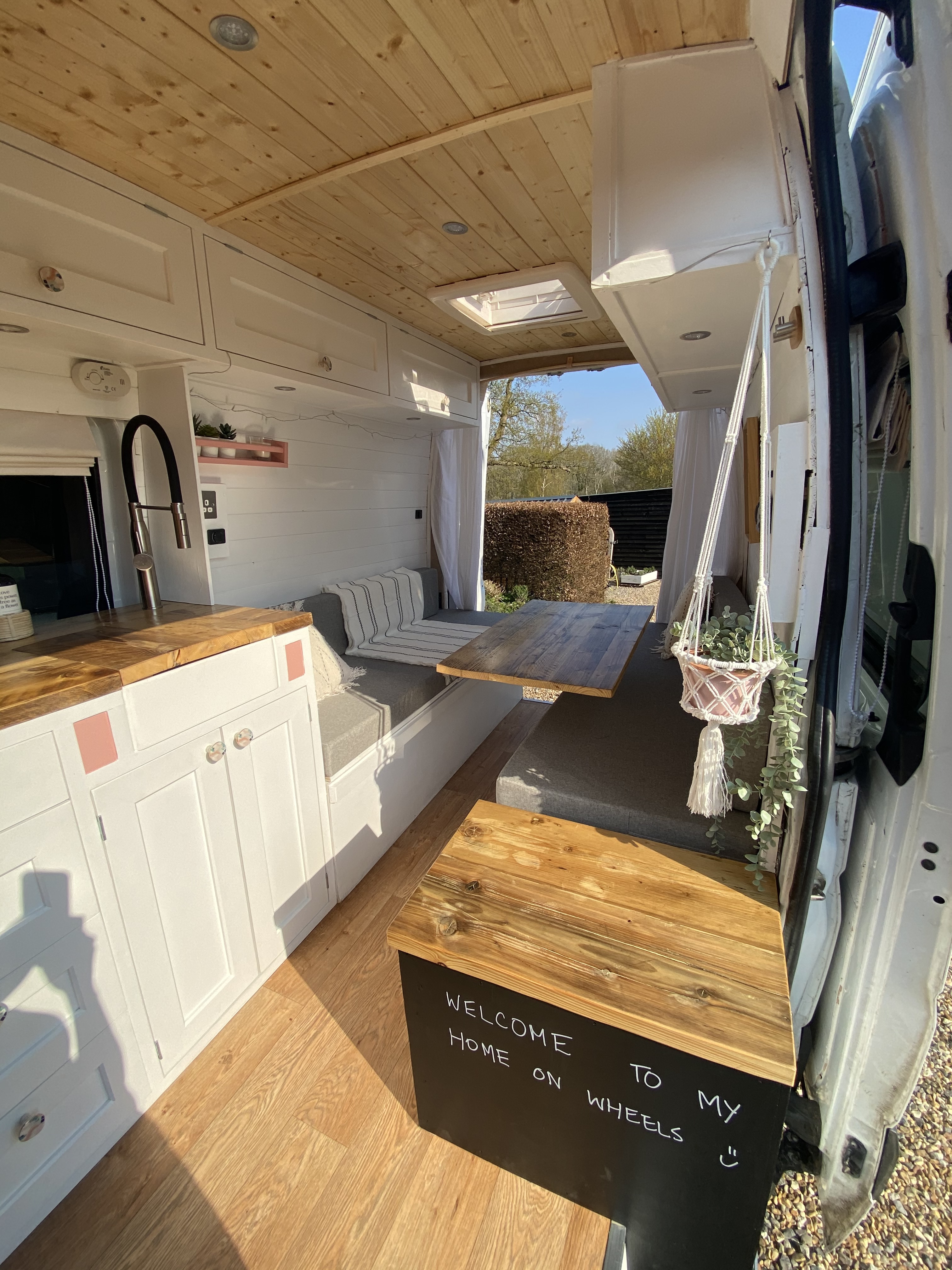 Amy worked on the van for many months, using her dad’s tools and enlisting his help to strip the walls and install a floor, insulation and cladding.

Amy says: “I had no DIY experience, but would learn from YouTube videos. I painted everything white for a beachy vibe, and reused things I already owned, like blackout blinds.

“I bought £10 scaffolding boards which, with the help of mates, I converted into a table and worktops. The loo is the worst part — a glorified potty with a flush, which I have to empty and clean every few days. I chuck the wee down special drains on campsites. It’s not my favourite job, but I’m used to it.

“The van also has a kitchen table and two sofas, which become the bed at night time. There’s a sink, two desks and a cooker, too. I open up the back doors and attach a curtain for the shower, which pulls out from the back of the van.”

Now Amy — who has a mobile router that provides wifi — travels around the UK, staying in campsites. She was the envy of friends when she pulled up on the beach in Cornwall during the recent heatwave.

She says: “It was fab waking up on the beach when it was 30C. Mates who previously thought I was bonkers were so jealous.”

Like Amy, Ellie Fishwick and Ben Pollard swapped normal life for #vanlife — and have no regrets.

After years of trying to scrape together a deposit for a house, Ellie, 25, and Ben, 28, from Accrington, Lancs — who have been together for four years — say the change of pace, not to mention living mortgage and bill-free, has been amazing.

Ellie says: “When we bought the van in June 2020, our friends and family thought we were crazy. Before, we were under so much stress from money worries and work. But now I love being able to move wherever we want to.
Skip-dived for tiles 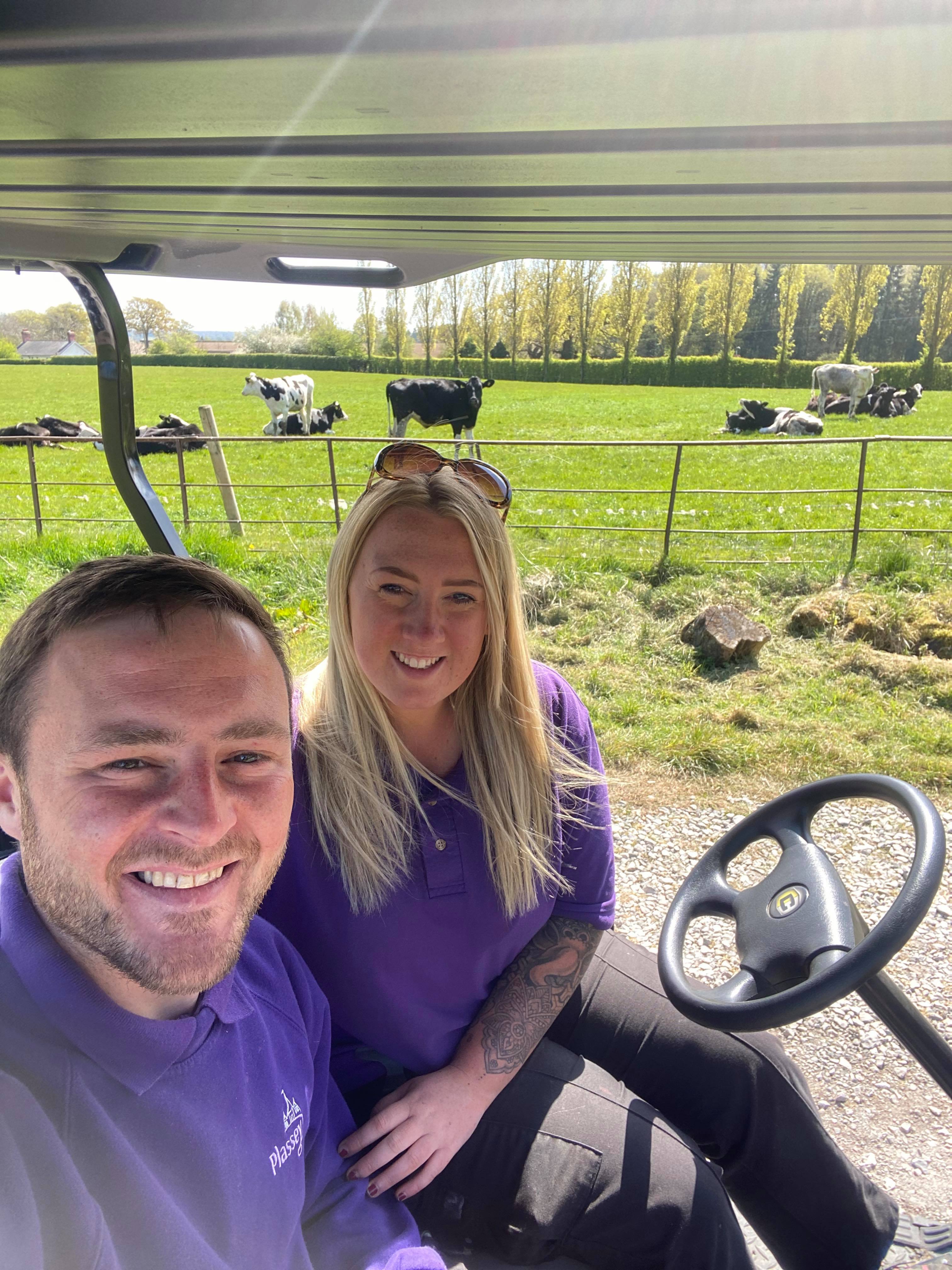 “When you tell people you live in a van, they often assume you’re homeless and you don’t wash. But when they see the inside of our home, they’re amazed.”

This time last year, Ellie was working as an after-school club manager, while Ben was a high-school caretaker. They were spending £1,200 a month on rent and bills for a three-bed in their hometown, while saving for a deposit on a £145,000 house.

Ellie says: “We struggled, but we saved £5,000 for a deposit. But in February 2020, when we were trying for a baby, I was diagnosed with endometriosis and told we can’t have children naturally, which was devastating.

“So we thought we might as well do something different. We read about another van-lifer on Instagram, and decided to go for it. In June, we paid £2,500 for a red, 4mx2m Mercedes Sprinter from a local dealer.

"A former ParcelForce van, it had done 170,000 miles and had some rust, but it had been well-serviced.We paid £50 for some paint and rollers, painted it grey then set to work on the inside.”

The pair spent a further £2,500 doing it up over the next five months. They skip-dived for tiles, hinges and wood, which they used to give the inside a cabin feel.

Ellie says: “We sound-proofed it, then built a kitchen area, a raised bed and a double sofa.”

In October last year, they left their rental house and moved into the van. At first, they travelled the UK at weekends and used the park4night app to find places to stay.

In February, they moved to a campsite near Wrexham where they got jobs as wardens.

Save up for bigger van

Ellie says: “We don’t have a bathroom, but we have a portaloo under the sofa for emergencies. Normally though, we’ll just go in the campsite toilets. 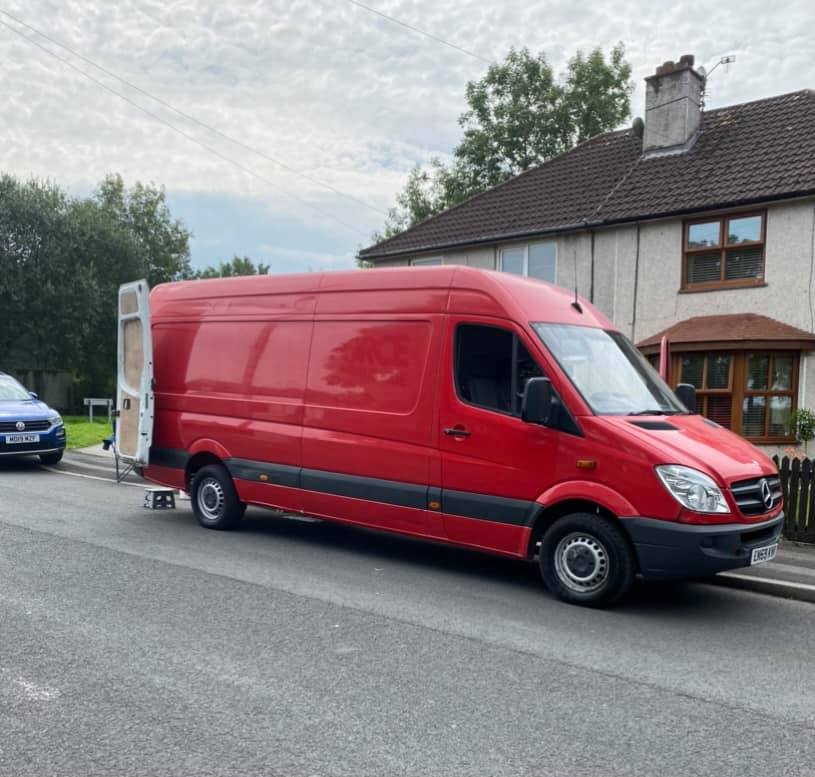 “For washing, our kitchen sink has an extendable tap that you pull out through the window to have a shower in our pop-up tent. We don’t have a TV and only watch Netflix on our iPad. In the evenings, we’ll go for a walk, ride our bikes or listen to music.

“We can get on each other’s nerves due to the lack of space, but if we ever want to scream at each other, we just go for a walk. We get paid a better wage than before, and we also get free pitch and electricity, so we’re saving about £1,500 a month.

“We were set on buying a house, but now we might save up for a bigger van or some land to live on. That would be the dream.” 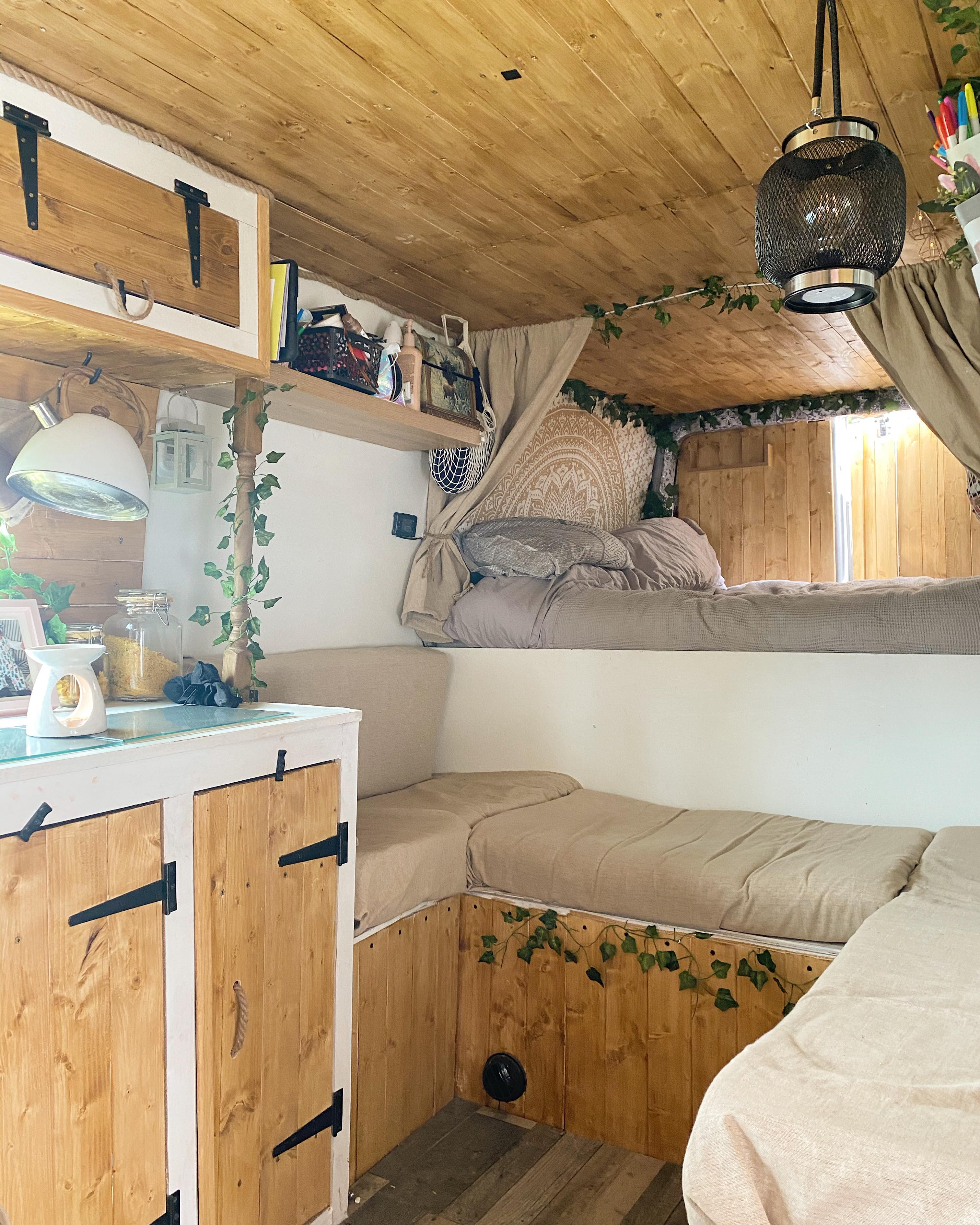