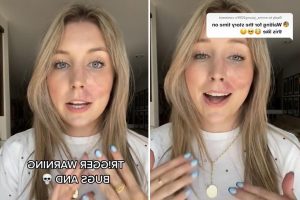 THERE’S nothing worse than a bad smell that just won’t shift.

But what started out as just a ‘bad smell’, very quickly escalated and kept one woman living in Los Angeles awake at night during the pandemic. 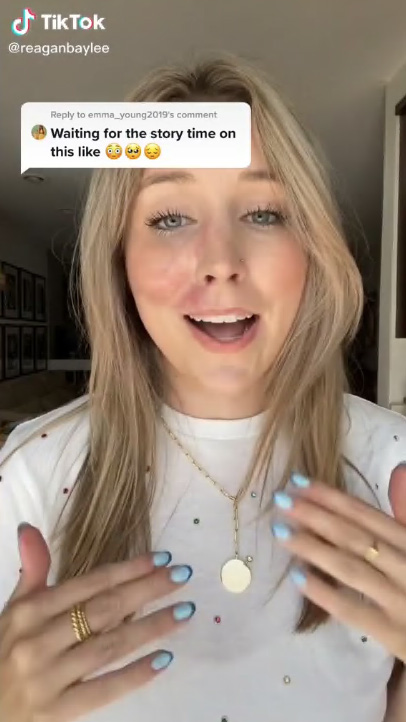 In May 2020, Reagan Baylee started to smell a horrific smell coming from her apartment block.

She had no idea what it was and described the smell as ‘dead fish’.

But after quickly realising there was no possibility that it was that, she quickly became concerned.

The smell was so awful it was keeping her up at night, making her feel ill and she was extremely confused.

She then decided to call the police and what they found was shocking.

Reegan explained the story on her TikTok account ‘reaganbaylee’.

She said: “I slept 3 feet away from my dead neighbour for 8 weeks during quarantine.

Her explanation of what happened took place in two parts.

In part 1, Reagan explained the “craziest thing that has ever happened to me.

“This is a story time on how/why I slept 3 feet away from my dead neighbour for 6-8 weeks during quarantine.

“Just giving a trigger warning, this story is kind of gross.

“It was May 2020 and the pandemic was definitely hitting a peak.

“Everyone had been at home at this point for the past two months and everyone was kind of going crazy, including myself.

“I lived alone at the time in a 250 square foot studio apartment that was very small in Los Angeles in the Valley.

“To give perspective for the rest of the story, my building is like an old motel style, so all of our doors open outside and the building is a rectangle, with my door being the only one of the end of the rectangle and two doors on either side of me. 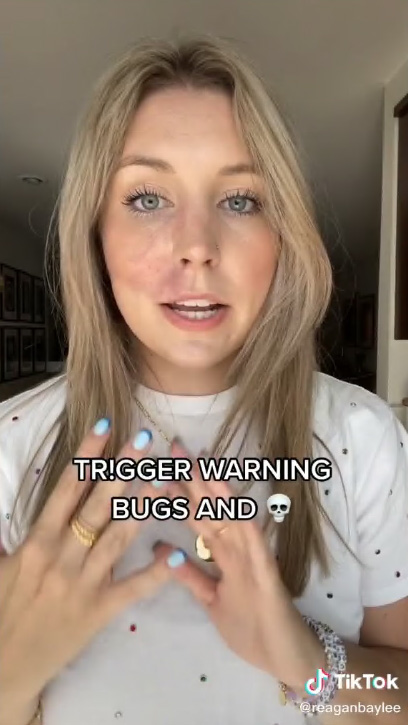 “It was around the middle of May and I started to call my mum and tell her I wasn’t really feeling like myself.

“What I mean by that was that I was having headaches, I wasn’t really sleeping through the night, I was feeling nauseous a lot and honestly we all kind of rode it off as me just feeling a little lonely and going a little crazy during quarantine, just like everyone else was.

“It was really unlike me to not be able to sleep through the night so I thought this was really strange but again I just kind of wrote it off because I just thought I was really sad and depressed.

“Throughout the month of May I noticed that I had like an uptake in the amount of bugs in my apartment which was very unusual because I’m extremely tidy and there’s never bugs but I noticed there was like a couple spiders here and there throughout the month but again I didn't really think much of it because it was really hot, it was the middle of summer and sometimes it happens.

“I started complaining to my manager that I was really sick of the spiders and I needed her to come but she said she didn’t really want to send anyone because it was the pandemic and it wasn’t an emergency and it wasn’t like I had one million of them, it was only like two or three.

“Towards the middle of May I started to complain about a bad smell that I would get whenever there was a heavy breeze but again it wasn’t anything I could really put my finger on, it was just something that I was smelling occasionally.

“Truthfully my best descrioton of this smell was kind of like a dead fish so I tohught that maybe a bird had caught a fish but in retrospect is the most stupid thing ever because tehre’s no lakes anywehre near me.

“I started to feel really crazy because again I wasn’t sleeping, the smell was really starting to bother me and this was going on for weeks but my manager was refusing to send anyone out or come out herself because of the pandemic.

“I started thinking maybe my neighbour who lived to the right of me had like, his dog had died or something had happened and I got really worried, but my manager told me she can’t just start knocking on neighbour’s doors and bothering them.

“But I had this really bad feeling that something was super wrong and the smell was getting really bad every time it was windy and I was really, really worried.

“But remember, it’s the middle of the pandemic and we had been home 24 hours a day, seven days a week so I think I had got kind of used to the smell.

“I called over my boyfriend, he came and I was super nervous to have him over because of obviously covid but he agreed the smell was horrific, he could barely handle it and then after staying with me for a week, he started not being able to sleep through the night, he was feeling nauseous and all of the same symptoms as me.

“This is when I started to think something is really wrong.

“Because my manager said she wouldn’t come out I decided to tell her I was going to call the police on emergency so they came out and did a check on the neighbour that lived to the right of me.

“Turns out he was perfectly fine and everything was okay.

“My manager was pretty upset with me because I was disturbing my neighbours and then they gave me a notice saying that I can’t be harassing people in the building.

“I consulted the police and they told me after 48 hours, if my manager didn’t conveen then I could call them again.

“And this is when things got crazy.

“I felt like I was on a mission because no one was listening to me adn manager was making me out to feel crazy.

In a second video detailing part 2, Reagan explained: “This is part 2 of how/why I slept 3 feet away from my dead neighbour for 6-8 weeks during quarantine.

“I’m going to give another trigger warning for just grossness overall.

“So where we left off was the end of May and this was the peak of the pandemic as I mentioned and this was around the time of Geroge Flyod which if you know, in Los Angeles was a very crazy time, there was tanks on the streets outside my apartment, it was very hectic and honestly, me complaining about a smell and some spiders was the last of anyone’s concerns, especially the police. 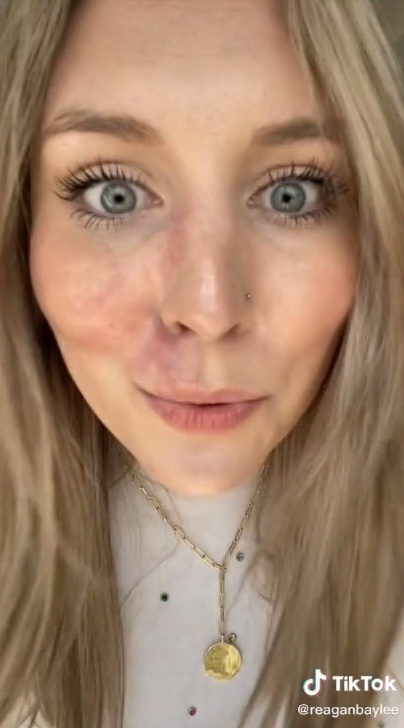 “I had already called the police once and they had told me that within 48 hours if nothing had been done or my manager didn’t get involved then I can call them again and they would escalate the situation.

“But honestly it was the last of anyone’s concerns.

“So my manager was quite upset with me for harassing my one neighbour but I had told her she needed to get involved and honestly she wasn’t really having it.

“I decided to give it a couple of hours and sure enough he showed up and within minutes of showing up to the building he had walked up the stairs because I was on the second floor and remember our buildings are rectangle, mine is at the end, there’s two doors on either side of me and stairs that go straight up.

“He ripped off his mask and said ‘I am going to get the master key, someone is dead’.

“I immediately start freaking out because I felt so validated after weeks and weeks of feeling crazy and complaining, and no one believing me.

“My manager stops answering her phone, the maintenance man literally disappears and never comes back, so I decide, I’m calling the police.

“Things went from zero to 100 really fast and honestly I was the prime suspect in all of this because I had been the only one who was complaining the entire time about this situation.

“I shouldn’t say I was a suspect, I was mostly just the main point of contact for this situation.

“Within a few minutes, there were eight cops all inside my apartment, gathering information and they said they were just going to start busting down doors.

“Right before the end of the 30 seconds, one of the cops says hey let’s draw down our guns, can anybody just try to open the door and see if it’s unlocked.

“And I was like ‘why would it be unlocked?’

“So the cop twists the doorknob and he opens it maybe an inch.

“The amount of bugs that came out of this unit, it looked like 1,000 bugs, thousands of them, flying out of the unit. 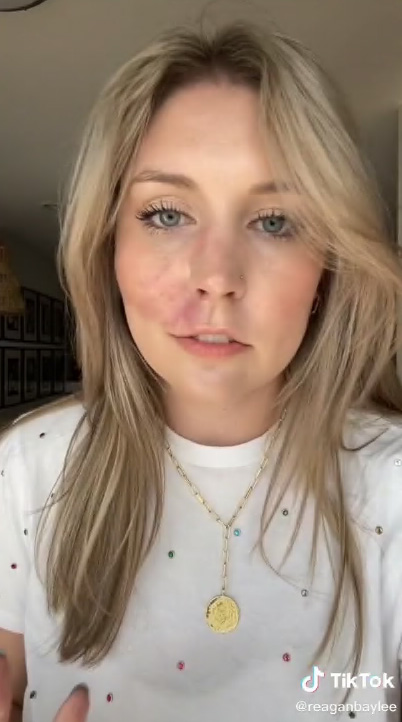 “They immediately slam the door and the cops called for a ton of backup.

“The cops started ripping off their masks and multiple of them were throwing up over the side of the railing.

“I slammed my door and they told me to stay inside and don’t come out.

“Long story short, they said this was the worst decomposed body they had ever come across and they see a lot of decomposed bodies.

“I’m not going to go too into the specifics of it, especially for the privacy of the person, but let’s just say they were liquified and they were basically a skeleton at this point.

“All the symptoms my boyfriend and I were experiencing were simply because of the fumes and toxic that were releasing from the body and the natural gases that were making me extremely sick during pretty much all of quarantine.

“And that is a story of how I slept three feet away from my dead neighbour.”

Well…that really was a story time and a half. 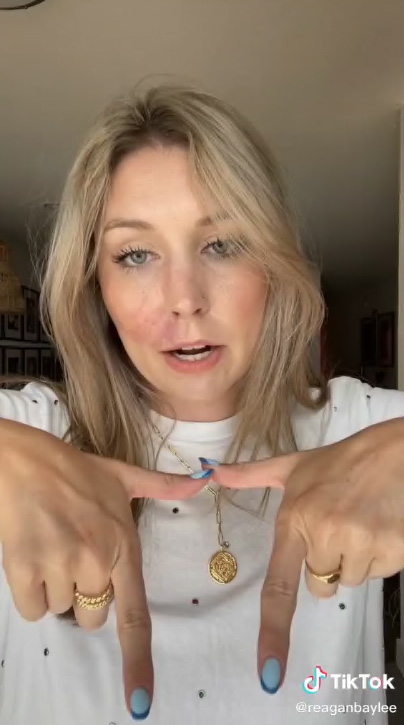 Meanwhile, I thought the gross smell in our bedroom was my husband’s farts – then we made a horrifying discovery under our carpet.

Also, I cleaned a struggling woman’s mould-ridden home for FREE as I love it so much – the before & after pics were shocking.