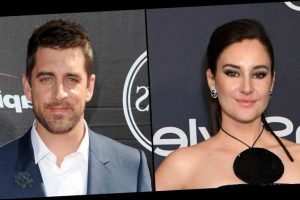 That rock! Shailene Woodley confirmed her engagement to Aaron Rodgers during the Monday, February 22, episode of The Tonight Show Starring Jimmy Fallon and gave viewers a sneak peek at her engagement ring.

Although the Divergent actress, 29, didn’t show too much of her left hand during the Zoom interview, she did flash the ring once or twice, showing off a giant diamond.

“Everybody right now is freaking out over it, and we’re like, ‘Yeah, we’ve been engaged for a while,” the Big Little Lies star told host Jimmy Fallon during Monday’s episode. “He’s, first off, just a wonderful, incredible human being. But I never thought I’d be engaged with somebody who threw balls for a living. Like, I never thought as a little girl, ‘Yeah, when I grow up, I’m gonna marry someone who throws balls! Yeah!’ But he’s really just so good at it.”

The actress went on to note that she didn’t know much about Rodgers, 37, personally — and even less about his career as an NFL quarterback.

“When I first met him, I think my dog like pulled me aside and was like, ‘If you don’t date this dude, I will disown you as my mother, because the three feet that I run with you when you throw a ball is nothing compared to the marathon I’m able to run with him,’” the activist added, confirming that the pair met during the coronavirus pandemic. “We met during this whacky, whacky time and all the stadiums were closed that he was playing in, so I have yet to go to a football game. Before I’d met him, I’d never seen one football game before.”

The Emmy nominee explained that since she “didn’t really grow up with sports,” she didn’t realize how much of an athlete Rodgers is.

“I knew he was a football guy, but I didn’t know, like, what kind of a football guy he was,” she said of the Green Bay Packers player. “And I’m still constantly learning!”

Woodley, who also said she doesn’t know her husband-to-be “as a football guy” but rather as “the nerd who wants to host Jeopardy,” was first linked to Rodgers in July 2020 but the pair kept their relationship private for months.

Earlier this month, Us Weekly confirmed the pair were dating, with a source saying that they “started off as friends,” but their relationship developed into more. “The two are staying in contact while they are living away from each other,” the insider added at the time. “The relationship is long-distance for right now, but they are making it work.”

On February 6, Rodgers thanked multiple people while accepting the 2020 AP Most Valuable Player at the NFL Honors awards, including his “fiancée.”