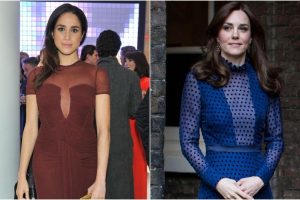 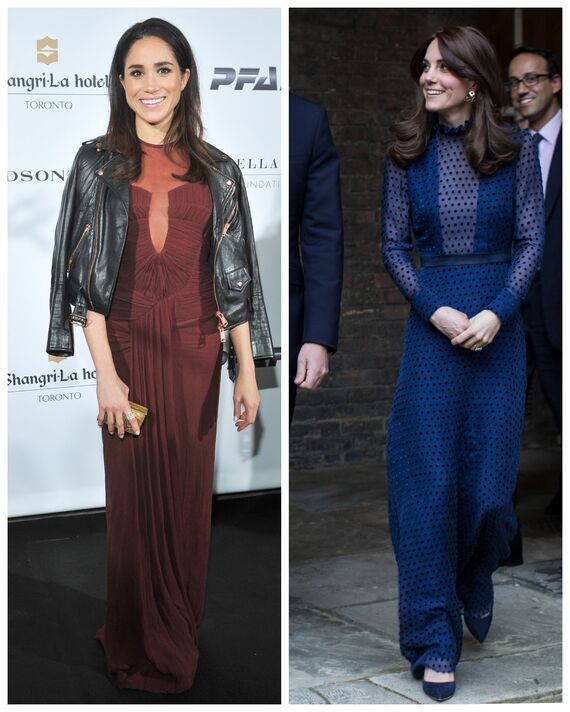 Meghan Markle, 41, attended a Hudson’s Bay event in Toronto back in 2014, dressed in a gorgeous burgundy gown. The floor-length burgundy dress featured a sheer T-shirt at the top, meaning the Duchess of Sussex’s shoulders and collarbone were on show.

The dress also featured a plunging neckline, making it a daring choice for Meghan back in 2014.

In some photographs, the Duchess posed with Markus Anderson at the event, the global membership director at the members club group Soho House.

As the dress was short-sleeved, Meghan could be seen later at the event covering her arms with a chic black leather jacket.

Two years later, Kate Middleton stepped out wearing a floor-length dress with a very similar style to Meghan’s, again with a plunging neckline.

The Princess of Wales wore a semi-sheer dress by Saloni to open the gates of Kensington Palace to foreign guests, a week before heading to India on an official visit.

Therefore, the choice to wear a dress by the Indian designer Saloni was a sweet gesture and a good choice.

Kate’s gown was a black-dotted blue maxi dress. It appeared to replicate the Victorian era with its turtleneck from the 2016 autumn collection.

The dress retailed for £498 at the time and was bought in large numbers by her fashion followers after the Princess wore it.

Kate’s dress looked quite similar to Meghan’s, as both were floor-length and featured sheer plunging necklines.

However, the main difference was that Meghan’s was burgundy whereas Kate stepped out in a blue dress.

According to fashion expert and personal stylist Samantha Harman, there is a reason why members of the Royal Family wear a specific colour.

Both Queen Camilla and Kate Middleton own many blue garments, according to Samantha.

Blue is a versatile colour and has been associated with the Royal Family since the 1800s when the name “royal blue” was first used.

This colour was said to be created in England by clothiers from Somerset who were participating in a competition to make a dress for Queen Charlotte, sometime between 1810 and 1820. Even though the shade of blue associated with the name has changed over time, the name still exists today.

Therefore, the colour is linked to royalty, and members of the Royal Family wear it often for a number of different reasons.

According to Samantha, Kate, Camilla, and the late Queen all wore blue because “the three of them are similar in terms of skin tone and colour analysis”.

Samantha argued that as the late Queen Elizabeth began stepping down from public duties towards the end of her life, this was when Camilla and Kate would wear more blue items.

She explained: “As the Queen steps back from public events, and has recently been unwell, thoughts are turning to the future. Camilla and Kate will be well aware of the role they need to play, and every part of their public looks are planned meticulously.

“Especially for a royal tour. It’s no coincidence that they’re wearing more blue – blue means stability and reliability. So, they’re conveying the message that the future is in safe hands.”