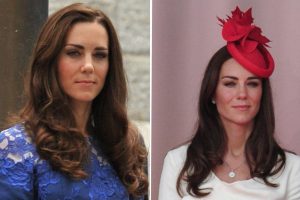 The Duchess skin is always flawless, meaning she needs barely no coverage to hide spots or other blemishes. Although she enjoys wearing mascara, Kate’s eye make-up is usually subtle and light – unlike how it used to be when she first entered the Royal Family.

Express.co.uk spoke to beauty experts about why Kate used to be more experimental with her make-up during her early years as a Duchess.

Was her smokey eye and eyeliner influenced by Princess Diana? And what has changed over the years as she ages?

Accoridng to make-up artist Joyce Connor, who works on sets of films and TV shows including Shondaland’s Bridgerton, both Kate and Diana wore eyeliner as their “signature” look, but in different ways.

She said: “Diana was a fan of blue eyeliner in the water line, whereas Kate always used to opt for black liner.

“She also wore this look on her wedding day.”

Joyce added that both women “are fans of blusher and Kate still wears plenty of blush”.

When Kate married into the Royal Family in April 2011, she was finding her feet, as well as her “look”.

“I think Kate wore a dark eye when she was younger as her trademark look,” Joyce said.

“Kate has now gone for a more neutral eye.

“She wears browns and nudes on her lids instead of black. She also doesn’t wear black liner in the waterline anymore.

“I feel that Kate has grown in terms of make-up and isn’t following trends but going for a softer, more sophisticated look.”

Joyce went on to say that Kate could “still get away with a smokey eye by wearing taupe, browns or grey instead of black”.

As for Diana, it was all about context. She was “from the era of a smokey eye make-up”, the make-up artist noted.

“If you look back, it was the time of Kate Moss on the cover of Vogue and the Sex and the City movie.

“Since, there has been a movement towards natural skin, and make-up that enhances the natural beauty of your face, rather than trying to contour into a shape that’s different to your own.”

Samantha continued: “Kate is absolutely beautiful, and I think she’s probably spending more of her time on skin treatments as opposed to make up.

“Make-up is always going to look better on skin that’s well looked-after and hydrated – which is also important when you’re constantly being photographed in all manner of lighting.”

Looking at both Kate and Diana’s make-up looks over the years, Samantha noted how the two women “accentuated their eyes”.

She said: “Her [Diana’s] former make-up artist has since said that Diana ‘realised her best feature was her eyes’ and would ask for looks that enhanced them.

“Diana had great bone structure and skin, so apart from the blue eyeliner moments, her make-up probably wouldn’t have looked too out of place today.”

Joyce added that the more time Kate has spent in the Royal Family, the more confident she has become in her look.

“Now that Kate has been in the public eye for a while she has become more about the clothes and less about the make-up,” she said.

“She nails her look every time, just like Diana did.”