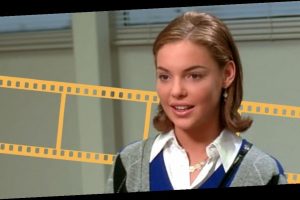 To some, Katherine Heigl is best known as Izzie Stevens from Grey's Anatomy. To others, she's Alison Scott from Knocked Up or Jane from 27 Dresses. But, to those who grew up watching the Disney Channel in the late '90s and early '00s, it's almost impossible to forget one — or maybe two — of her earlier and arguably most iconic roles: Alexia and Hayley Wheaton from Wish Upon a Star, a movie that follows two sisters who accidentally swap bodies for a few days.

The made-for-TV film comes with a touching yet somewhat generic message. One sister is "popular" while the other "brainy," but in the end, they realize they're not so different after all. It's a feel-good, light-hearted, and nostalgic watch, but the highlight of spending an hour and a half revisiting it, decades later? All of Heigl's outfits, which are actually cute as hell and kind of modern, thanks to the return of '90s trends. The main outfit that Alexia wears — or, actually, Hayley wears while in Alexia's body — is sort of a sexy spin on a schoolgirl look, consisting of a knotted white button-down, a printed skirt, and a cropped vest. The high schooler is also on top of the tiny bag trend, carrying a mini backpack, and has embraced 2021's babydoll shoes, pairing white thigh-high socks with a pair of strappy heels. Unsurprisingly, the movie's fashion choices have managed to resurface on the Internet, with people recreating this particular look via Instagram and TikTok. While millennials might catch the reference to Wish Upon a Star, it's not immediately obvious, especially since so many of these pieces fall in line with today's top trends.

What's even better is that this isn't the only Wish Upon a Star ensemble we'd still wear today. Heigl's movie wardrobe is pretty incredible and includes chunky, collared cardigans and a matching bike shorts set that she wears as a gym uniform. We'd also be doing you a disservice if we didn't mention Alexia's purple monochromatic outfit, which was expertly paired with a bow-embellished clip, white sunglasses, small hoops, and a white sweater jacket. Is it possible for us to swap bodies (and closets) with Alexia next? We're kind of getting HBO's Euphoria vibes from some of these looks. The good news is that it's possible to get a better look at these outfits and more with just a few clicks. The movie is currently available to stream — for free — on both YouTube and Amazon Prime.

END_OF_DOCUMENT_TOKEN_TO_BE_REPLACED

END_OF_DOCUMENT_TOKEN_TO_BE_REPLACED
We and our partners use cookies on this site to improve our service, perform analytics, personalize advertising, measure advertising performance, and remember website preferences.Ok