“I’m going to get upset,” she warns. “They’re little, they’re really little. Some of them had lost siblings and parents in Grenfell.” 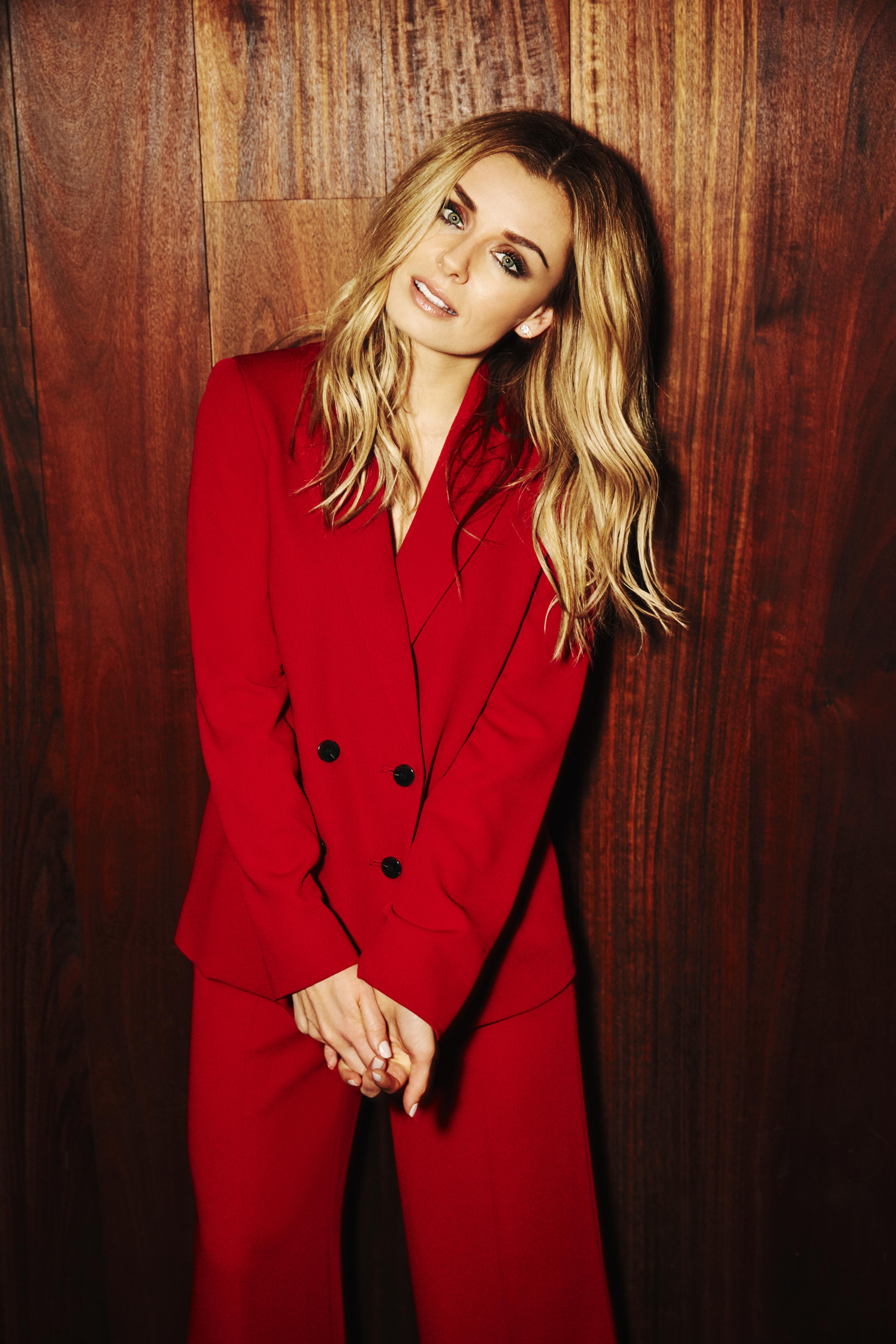 We’re discussing the mezzo-soprano’s work with Grief Encounter, the child bereavement charity she supports, motivated by her own experience of loss following the death of her dad Selwyn when she was just 15.

“It was the best afternoon, and at the end we each held a candle and talked about who we were singing for,” she says. “It was really, really emotional. When I came home I was absolutely broken from it.”

Mum to Aaliyah, three, and six-month-old Xander with her husband of four years, American movie producer and artist Andrew Levitas, 41, Katherine admits the loss of her dad – and Andrew’s, who also died when he was young – fuels daily worry. 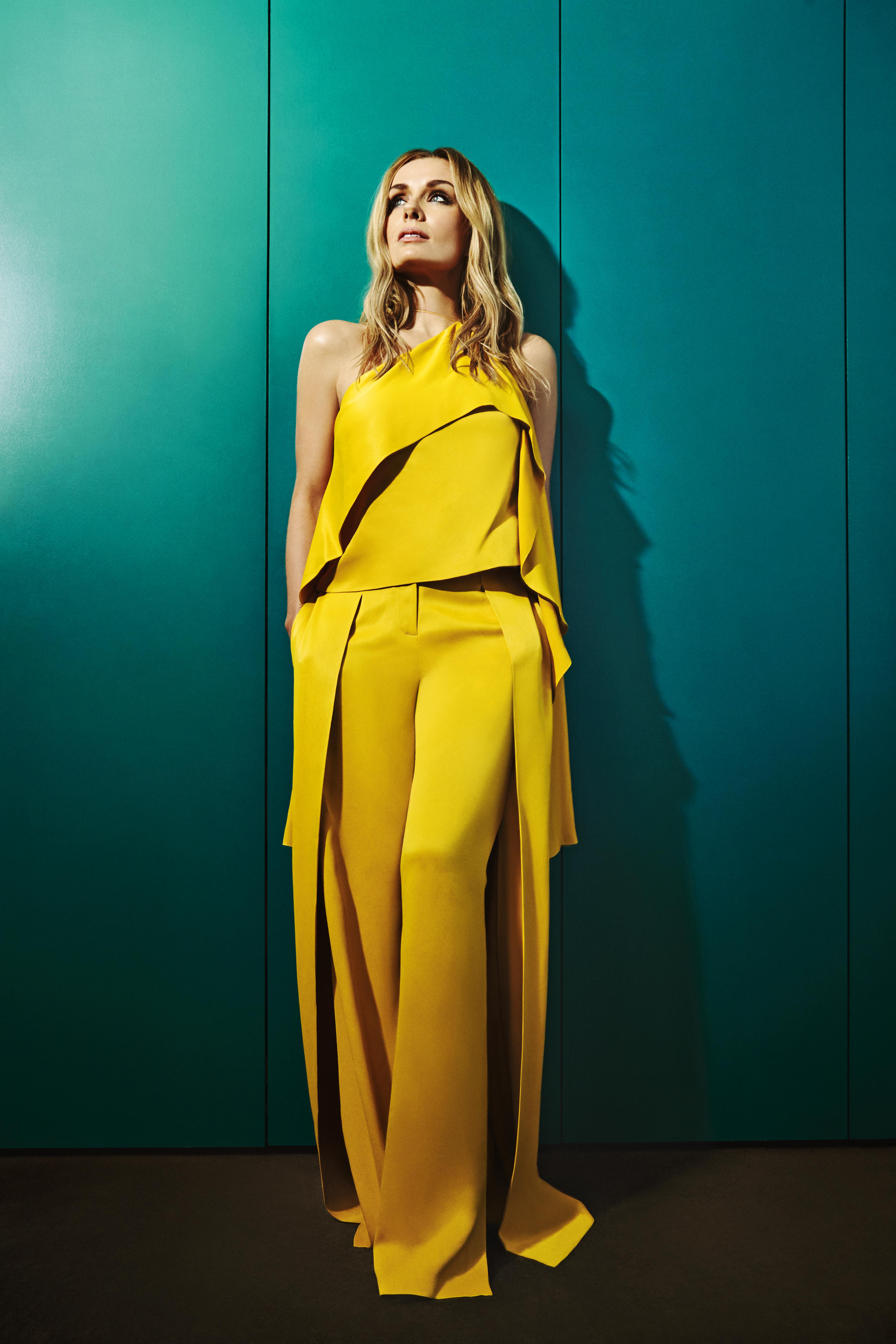 “We have both been without a parent for most of our lives, and I would like to think that will never happen to us, but that’s not how I feel.”

She says that battles with body image and fad diets are now firmly in the past as she focuses on staying fit and strong for her young family.

“I concentrate on healthy living and lifestyle now more than worrying about how thin I look, because that’s more important in my life.

“I did crash dieting when I was younger. It’s now about putting good things into my body to give me the energy to look after the children, go to work and be the best version of myself.” 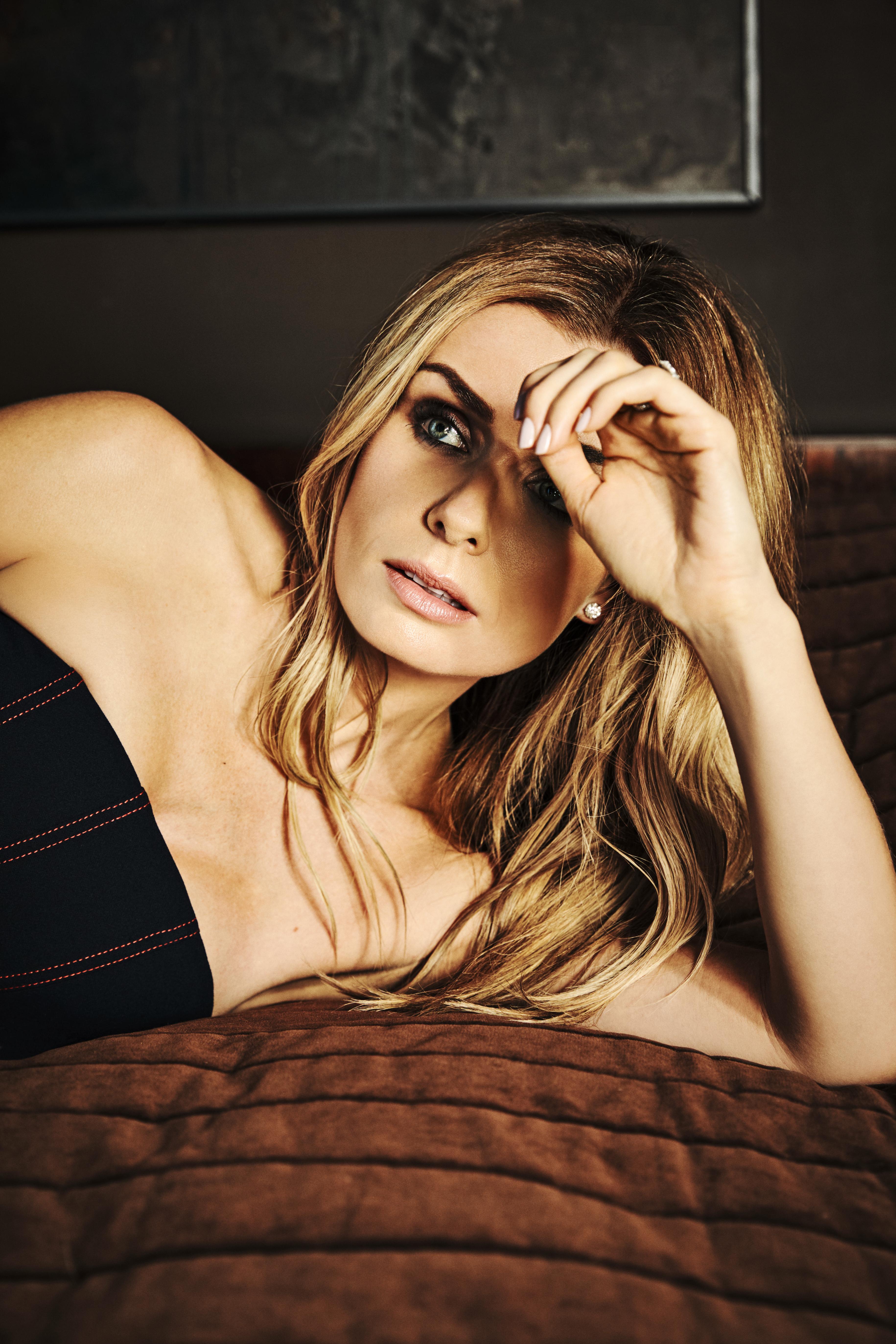 Katherine has “learned to love fitness” in recent years, and on a normal week packs in yoga, running and two or three weights sessions with her personal trainer.

She has also cut out dairy to aid her voice after developing an intolerance during pregnancy. One mouthful of milk makes her feel nauseous and causes acute acid reflux, which plays havoc with her vocal chords.

“Because of that, I’ve had to adopt quite a straightforward, sensible eating plan,” she explains, adding that doing so during pregnancy prevented any post-partum panic over shifting the pounds.

“I allowed myself enough time to [lose the baby weight] sensibly,” she says. “Also, breastfeeding helps.” 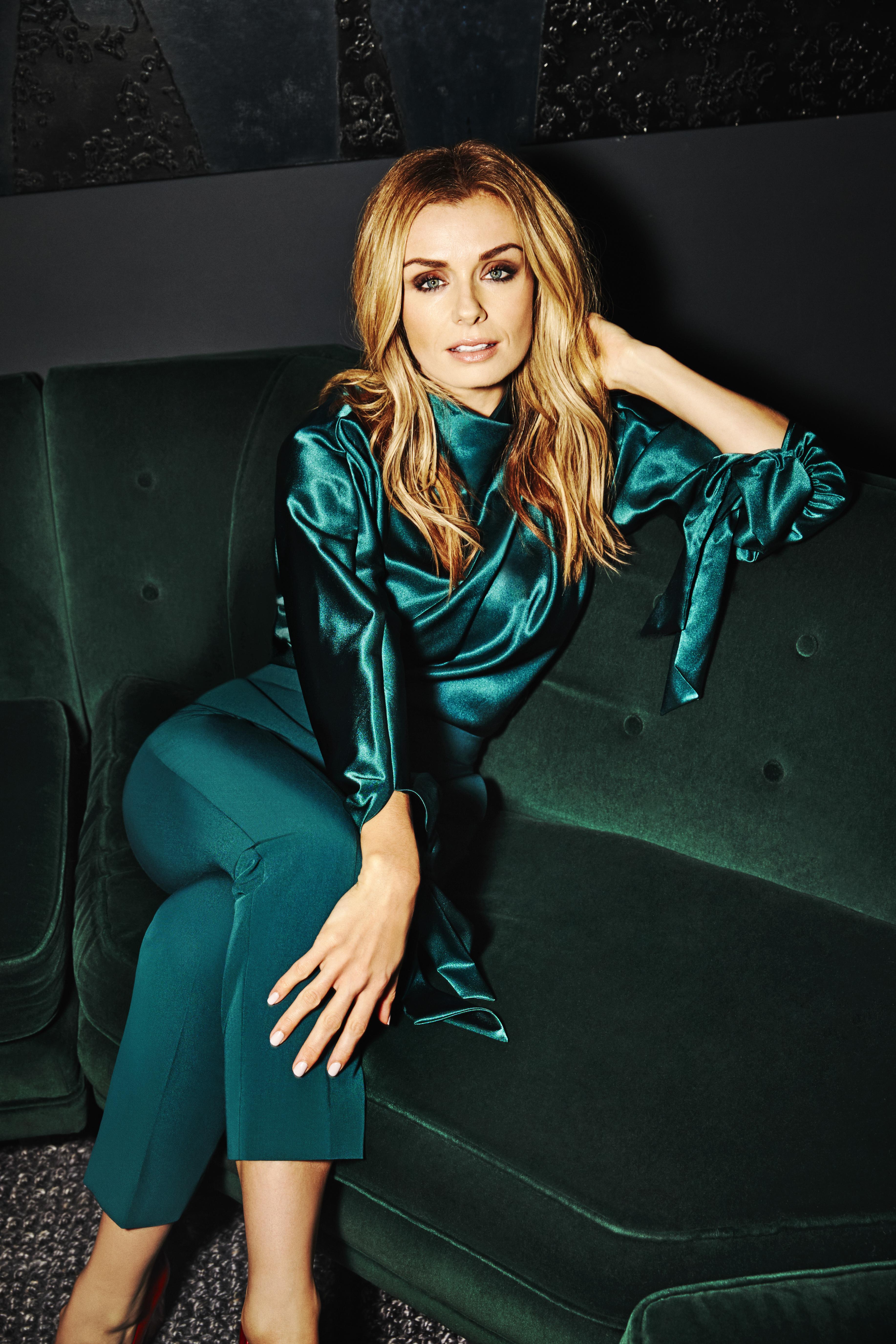 Katherine pulls up a photograph on her phone of herself and the kids backstage at the Royal Albert Hall, the night she performed at the Classic Brit Awards in June, seven weeks after giving birth. Tiny Xander is in her arms, and Aaliyah is somewhere beneath, buried in the folds of Katherine’s baby-pink gown.

“There were breast pads and all that kind of nonsense going on,” she laughs. “My hormones were crazy. I was breastfeeding backstage. That was a real moment of: ‘Oh my gosh, what am I doing? I must be absolutely nuts.’

“It’s a lot more nerve-wracking to find that performer when you’re being Mummy. I think Adele said that, and it really resonated with me. It’s a different thing for a female.”

Katherine’s motivation to get back to work was simple – she adores performing and wants to be a positive working-mum role model to her children, just like her mother Susan was to
her and her sister Laura when they were growing up in Neath. 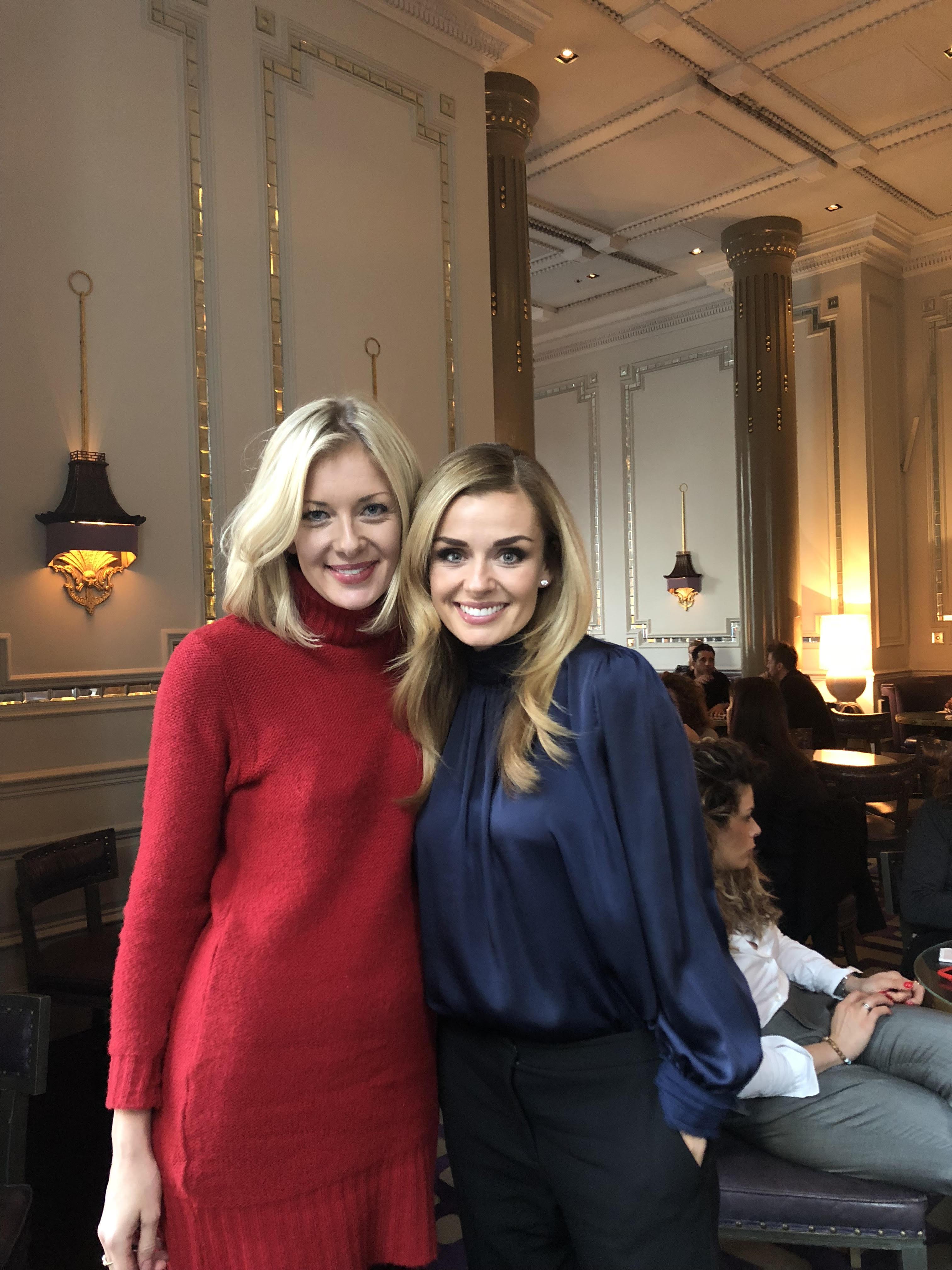 With a reported £15million in the bank, Katherine’s working-class beginnings seem a world away. She landed on the music scene 15 years ago, first getting noticed performing
at Westminster Cathedral in honour of Pope John Paul II’s silver jubilee, then becoming the Welsh Rugby team mascot, before her debut album Première – part of a £1million, six-record deal with Decca – was released in 2004.

Eleven albums later, Katherine has shifted over 8 million copies globally, been honoured by the Queen with an OBE for her dedication to performing for British troops, and branched out into television, hosting the BBC’s Songs Of Praise.

I don’t worry about how thin I am any more. I just want to be healthy for my children

But there’s a huge difference between the Katherine of today and the one of old. Once a master of PR, at times her answers seemed too polished, as though admitting any flaws risked damaging the glossy, classical musician sheen. These days, she seems more relaxed and less guarded. Viewers of The Jonathan Ross Show last month saw her rap to Jay-Z and Alicia Keys’ Empire State Of Mind, and it’s obvious today in her willingness to share cute family anecdotes.

Katherine describes finally feeling “really grounded, happy and comfortable”. Has this altered the way she feels about being interviewed? 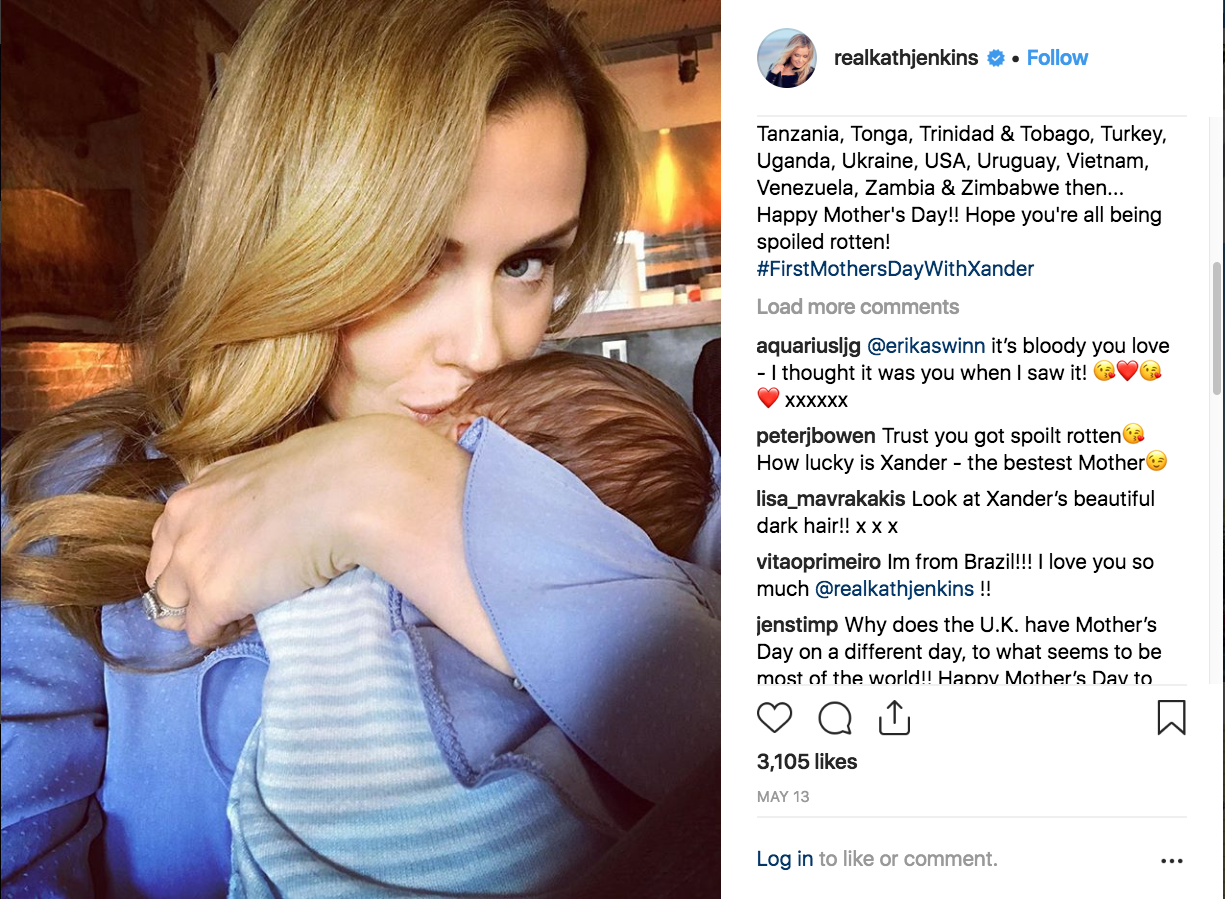 In the past, interviews invariably touched on Katherine’s love life (including her split from TV presenter Gethin Jones in 2011, less than a year after getting engaged) and drugs (she took cocaine during her student days, which she admitted to Piers Morgan in 2008).

Katherine understands there’s a good chance her children will one day read internet reports detailing her past, warts and all.

“My godson lives near me, and one day he knocked on my door and said: ‘Is it true? Is it true you are the Katherine Jenkins?’

He said that someone in school had told him,” she says. “It’s little things like that through to much more delicate conversations that we’ll need to have. I’m just going to have to be as brutally honest as I can be.” 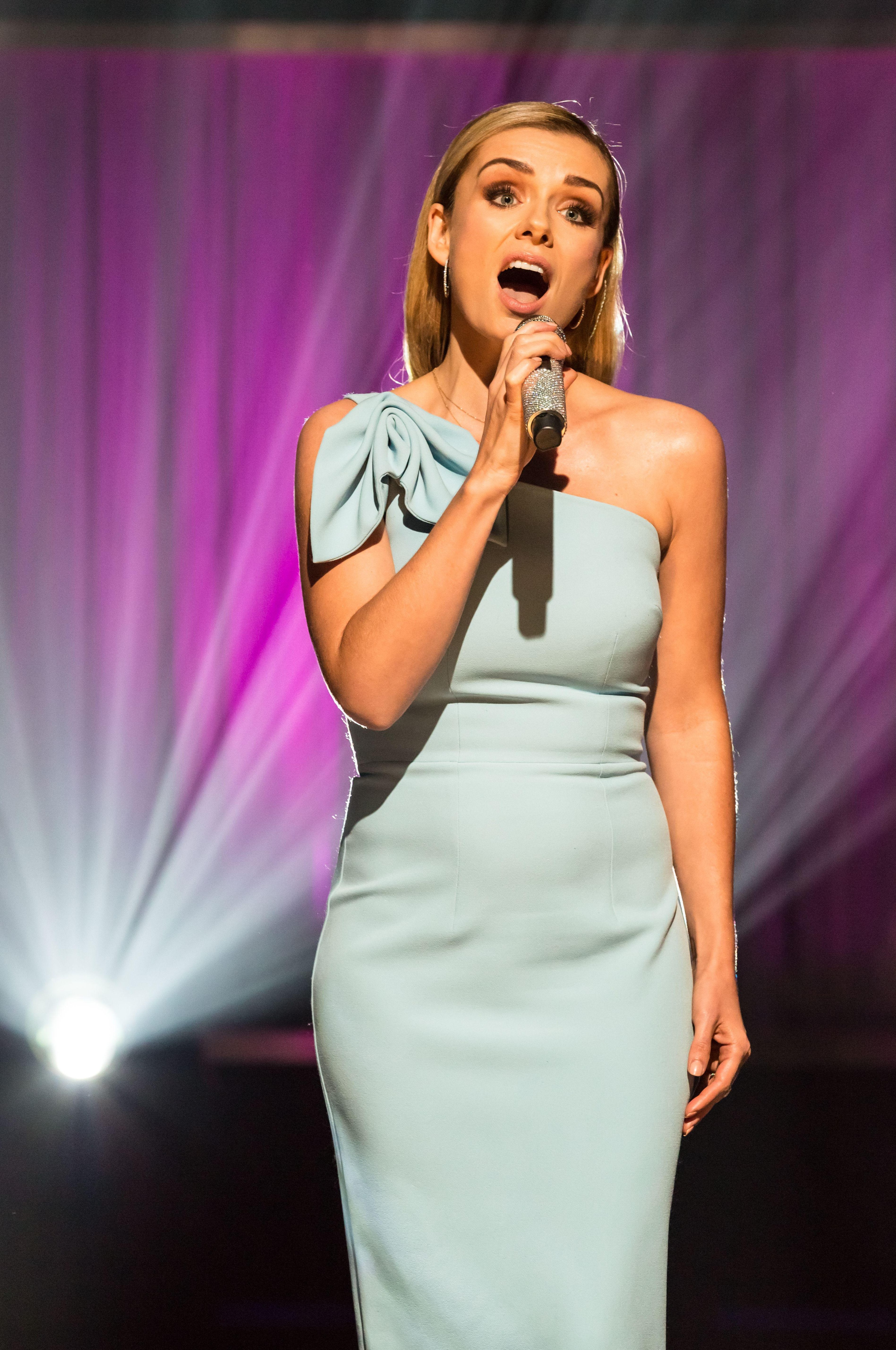 Katherine confirms she and Andrew will be “open to having difficult conversations” with their children about everything from body image to sex and drugs, but it’s likely her husband will take the lion’s share of that responsibility.

“He’s American and more used to talking about his emotions in a way that I’ve learned to do more,” she says. “I’m so happy that he’s the father to my daughter, because when she acts out, he goes and talks to her about what she’s feeling. That’s what we all need to be doing.”

What is she personally dreading discussing most with Aaliyah?

“If she asks me about anything I’ve done where I wish I could say: ‘That didn’t happen,’” says Katherine, adding that there’s merit in being a mum who’s lived and learned. “At least I’ll be able to talk to her with some understanding and experience and not sound like I’m totally out of touch.” 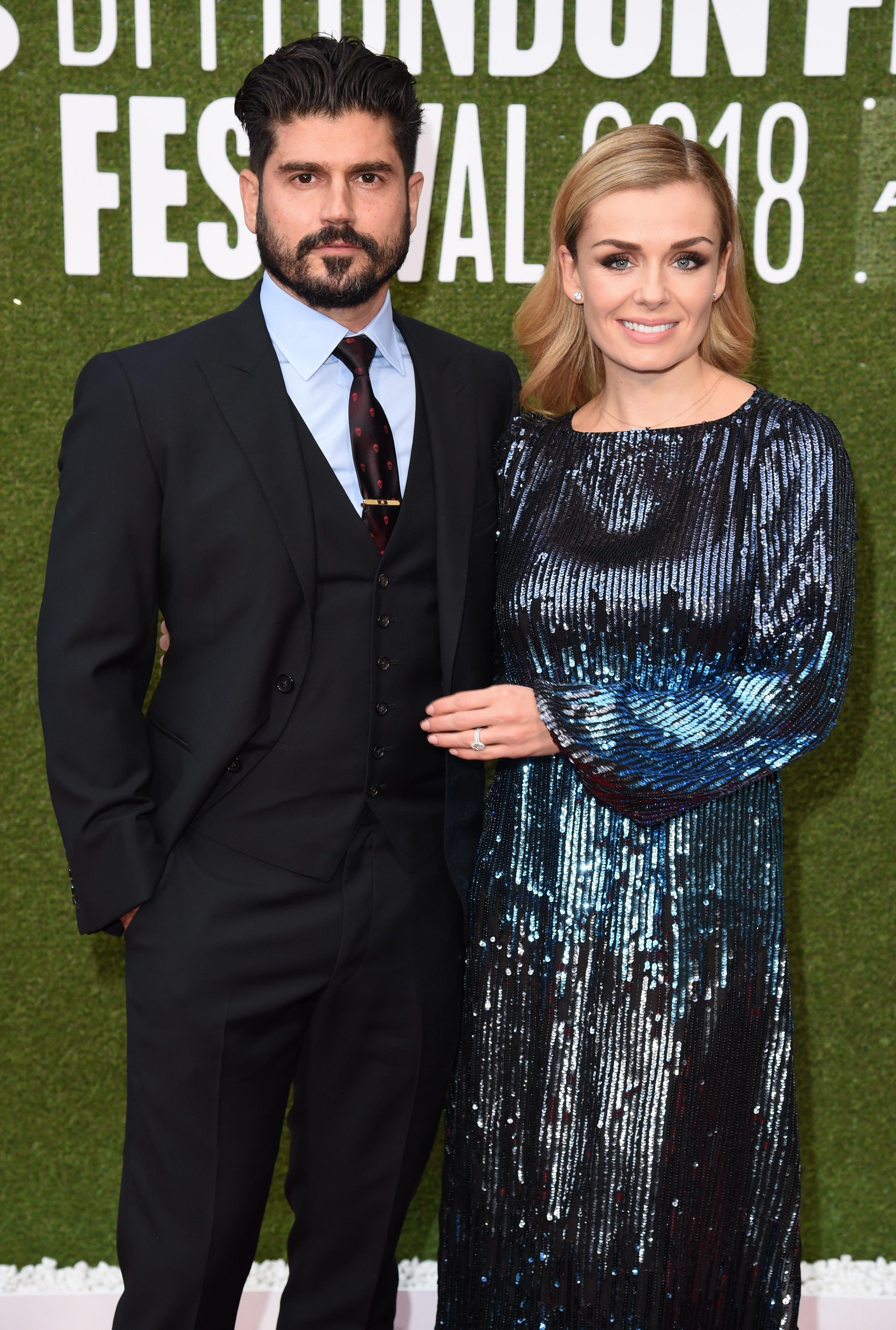 When talk turns to #MeToo, Katherine admits to being a victim of predatory men, but she won’t go into specifics, explaining her children deserve the right to one day learn about what happened by talking to her, not reading the details in a news story.

What she does say on the matter is this: “It’s happening across the world, to men and women, and it’s not on, in any way. I have had issues where I’ve felt uncomfortable at times, or had something said to me, but that was in everyday life and it wasn’t in the music business. That’s probably what most women have encountered.

“I’m obviously going to have conversations about that with Aaliyah, but I think it’s actually more important to have them with Xander, because it’s about teaching him respect and permission and knowing that no is no, and there has to be consent. All those things are part of being a gentleman. He needs to make sure that he understands all that. I think this has been an exercise in looking at our sons as well.”

Motherhood has been a jungle — and I'm not cracking it

There’s no doubt that Katherine has embraced motherhood. She describes her and Andrew’s parenting style as “hands on” – she cooks a roast for the family every Sunday at their home in west London, and there’s no nanny on the pay roll, just “a couple of really good babysitters”, plus her mum to help out when necessary. But with movie-maker Andrew working LA hours and regularly jetting across the pond, Katherine naturally feels the pressure.

“It’s been a juggle – that’s the hardest thing and I’m not cracking it,” she confesses. “I’m just going through day by day. I feel a lot of responsibility to keep the house going, like everybody feels.

“It’s just the juggle of keeping all the plates up in the air, but trying not to be hard on myself when it doesn’t work out, because it doesn’t all the time.”

As a mum, she has a “do less and if I feel I can add more, I will” attitude to work – a million miles away from her frenetic existence eight years ago when being “on a plane almost every day” and rarely out of performer mode changed her for the worse. 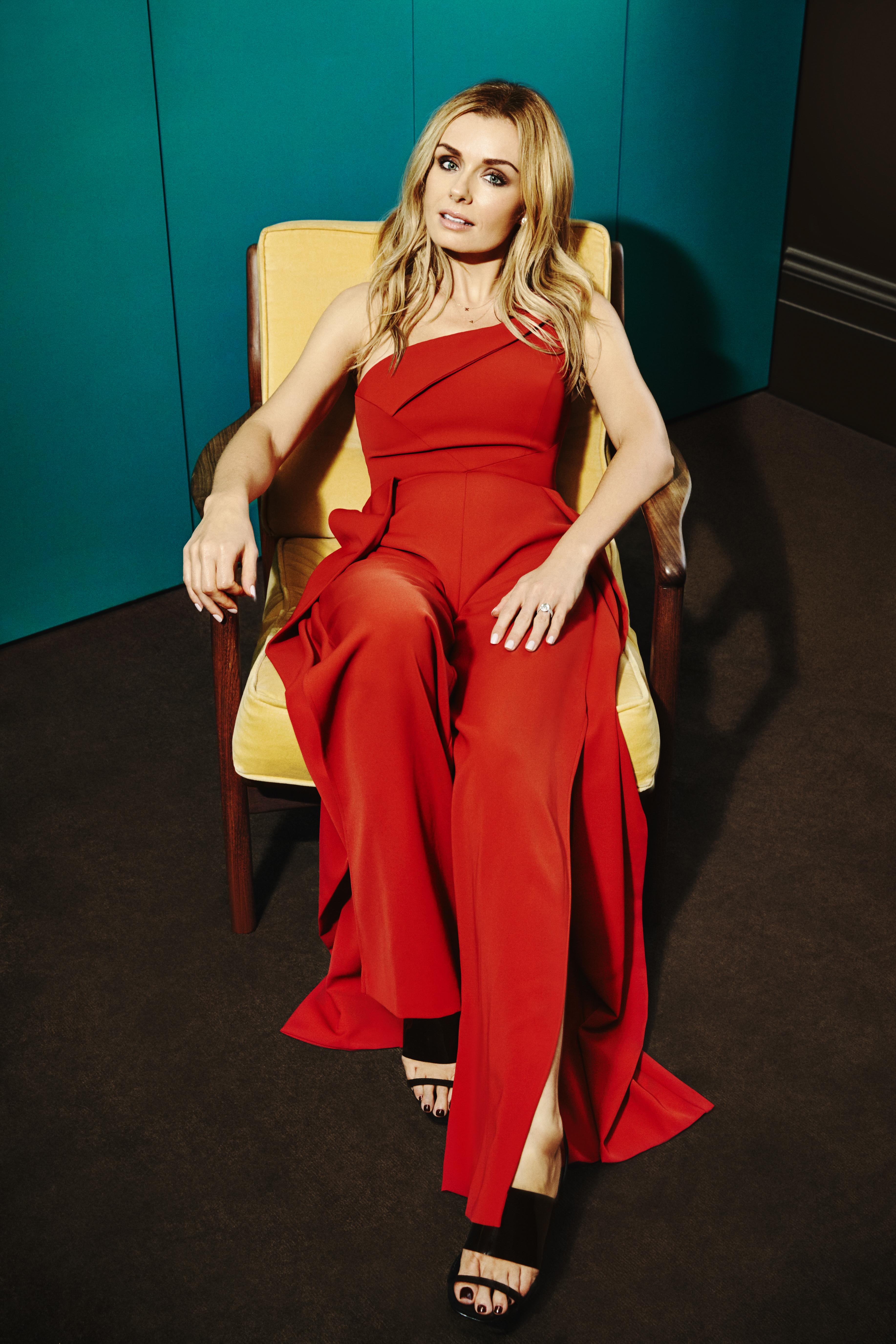 “When you’re not giving yourself any mental downtime, it has an effect,” says Katherine. “I didn’t have that down-to-earth quality, which my friends will tell you I’ve had all my life. Work was so much on my mind.”

Save for a solo work trip to South America and Asia in the New Year, Katherine is strict about returning home for mum duty after every performance. She also has one day at home for every one she works. Is she a nicer person now she’s found greater balance?

“One hundred per cent! Having the children has made me the better version of myself. I’m calmer, I’m more patient, I have a lot more understanding for people. It’s definitely changed me in a better way.”

This new attitude shows in the tone of Katherine’s new album Guiding Light, her first in four years. Less anthemic, it’s calmer and more spiritual. There have been other new career avenues, too.

Favourite platform?
Instagram – I really enjoy being able to communicate with my fans through pictures.

Funniest person on Twitter?
@Bettemidler – what a total legend! And I always get a good laugh out of @Thefatjewish on Instagram.

Are you on Facebook?
I set a personal one to keep up to date with friends and family.

Social media – good or evil?
I think it’s a balance of both.

While pregnant with Aaliyah, Katherine cooked up an idea for a classical-music-themed TV show to help four to eight year olds appreciate the genre.

Now Symphony Street is in production, with four international partners on board and Katherine voicing a character, Catherine the conductor.

Then last year she starred in the English National Opera’s revival of Rodgers & Hammerstein’s Carousel – her acting debut, which she prepared for by hiring an acting coach.

Katherine admits she was nervous about speaking with an American accent in front of Andrew.

“He’s so blunt. He is so honest,” she says. “Andrew will tell it to you straight. I knew that if I didn’t nail it, he would tell me exactly what was wrong with the accent, which he did. But I needed that and I feel that his input ultimately gave me a lot of confidence.

“He’s adorable,” she goes on. “I just feel very lucky that I’ve met my match and found my partner, and he’s so supportive of everything I do.”

Katherine may be smitten, but there is no more baby making on the horizon, thanks very much.

“I feel very, very blessed to have two healthy children, so let’s quit while we’re ahead and enjoy them,” she says, adding that she’s excited about enjoying a relaxed Christmas with her little family, involving a bit of time in Wales before popping across to New York.

“A great work/life balance, some quality time with my children, and my husband’s got a big project next year, so I look forward to supporting him as he’s supported me,” she says.
Not cracking it? From where we’re standing, Katherine is managing the juggling act of motherhood, marriage and career just fine.