Laverne Cox made a trans-positive statement while looking fiery hot in a sexy swimsuit on a luxury vacation.

Laverne Cox, is that you? The stunning beauty showed off a hot and sexy black swimsuit while she chilled poolside on a vacation that we are obviously jealous not to be on. The actress and television host posted a series of videos to her Instagram account over the course of a few days, starting on Monday, October 11, modeling her ultra-sultry suits. They all came with a positive message, too — Trans is Beautiful.

Let’s start with our favorite: the reveal. In an October 13 video, Laverne wore a too-die-for sheer coverup and unveiled an incredibly glamorous plunging one-piece swimsuit with cut-outs. It’s unclear where the Orange is the New Black star is actually vacationing, but it’s obvious that she understood the assignment as she twirled away in the TikToks she reposted to her ‘gram.

In another post, the LGBTQ advocate went makeup free in another plunging black one-piece while listening to The Go-Gos “Vacation” and taking a dip in the pool. “Trans joy,” Laverne captioned another stunning video of herself strutting toward the camera. We know Laverne loves her black swimsuits but these might take the cake!

Laverne is a well-known advocate of trans rights and trans visibility, both on social media and on the public stage. The activist is one of the most vocal transgender public figures in the country and is known as being a trailblazer for the community in Hollywood. Before Laverne’s breakout role in OITNB, she appeared in hit TV shows like Law & Order: SVU and had smaller roles in films. 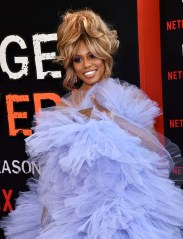 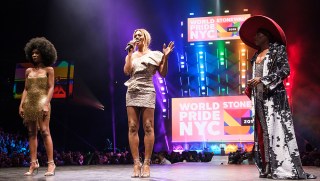 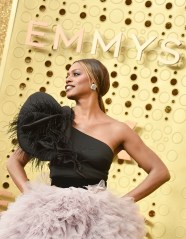 Now the Emmy award-winning actress is the new host of E!’s Live from the Red Carpet and can be seen in a number of hit TV shows like Awkwafina is Nora From Queens and HBO’s Curb Your Enthusiasm.