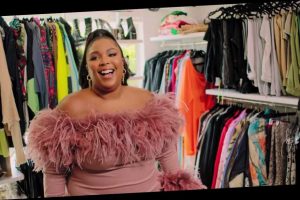 When it comes to fashion, Lizzo's never afraid to make a statement. And while she says she has no regrets with what she's worn, the Grammy Award-winning artist felt many of her style choices were "instantly political" because of the way she looks.

"I think that I was politicized because of the things that I wore," Lizzo, 32, told Vogue for the 73 Questions video series. "Being a big black woman, wearing what I wore on stage was instantly political and it made a statement and I’m grateful for that."

She admits it "was annoying at first," but now the "Truth Hurts" singer appreciates being part of the body positivity movement. "I’m so grateful to be a part of moving the conversation in fashion forward for bigger bodies and Black women," Lizzo said.

During the Vogue video interview, Lizzo gave a tour of her house, including her closet, which was filled with special pieces like a hand-painted denim jacket gifted to the singer by a fan. "I'm too scared to wear it. I wore it on stage once," she said.

RELATED: Lizzo Reflects on ‘Commercialized’ Body Positivity Movement: ‘Inclusivity Is What My Message Is’

When asked about which item of clothing makes her feel the most powerful, Lizzo looked around before realizing "it is not in here." She continued: "But I love a good bra and panty set. The sexier the better."

Another Lizzo-approved look? High-waisted denim. "All of my jeans are high-waisted jeans. Cause my waist is high. I’m a big girl, my waist is up here. It ain’t here," she said as she pointed to her torso. In her October Vogue cover story, Lizzo got candid about how she doesn’t fully claim the term “body positive,” and prefers using “body-normative” instead.

“I think it’s lazy for me to just say I’m body positive at this point,” the star said. “It’s easy. I would like to be body-normative. I want to normalize my body. And not just be like, ‘Ooh, look at this cool movement. Being fat is body positive.’ No, being fat is normal. I think now, I owe it to the people who started this to not just stop here.”

END_OF_DOCUMENT_TOKEN_TO_BE_REPLACED

END_OF_DOCUMENT_TOKEN_TO_BE_REPLACED
We and our partners use cookies on this site to improve our service, perform analytics, personalize advertising, measure advertising performance, and remember website preferences.Ok