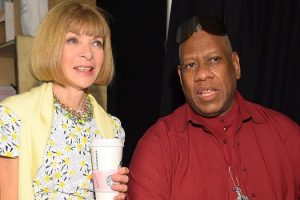 Former Vogue editor-at-large Andre Leon Talley has finally abandoned “the chiffon trenches” of the fashion world, a term he used for the title of his recent memoir, dying after suffering a heart attack at the age of 73.

From 1983 until his shock exit in 2018, Talley moved in the ozone of the fashion world, delivering gossipy and witty articles forVogue that skimmed the surface of his profound knowledge of design. Just as impressive was his close relationship withVogue editor-in-chief Anna Wintour, which unravelled, leaving Talley hurt and perplexed. 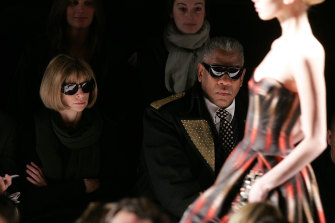 “I had suddenly become too old, too overweight, and too uncool, I imagined, for Anna Wintour, Talley wrote in The Chiffon Trenches, released in 2020. ” For Talley, Wintour’s crime of fashion and taste was leaving the task of firing him to a mid-level Vogue employee. “Anna should have had the decency and kindness to call me or send me an e-mail.”

Despite high-profile roles at Andy Warhol’s Interview magazine, The New York Times and Women’s Wear Daily, where Talley as bureau chief of the Paris office formed an enduring friendship with Karl Lagerfeld, Vogue was Talley’s destiny. Raised in Durham, North Carolina by his grandmother, a maid at Duke University, the magazine offered an entrée to a world that his 198cm frame would eventually dominate.

“Vogue was my hobby, and no one in my family ever had a copy of the magazine in the house until I did,” Talley told designer Miuccia Prada in Interview magazine, in 2003. “The big experience was on Sundays after church. I’d wash the dishes, walk to the white part of town … to the newsstand that was open on Sundays. That was my big joy.”

After completing a Masters in French Literature at Brown University, Talley’s fashion education began when he worked as an unpaid intern for former Vogue editor Diana Vreeland in the Costume Institute at the Metropolitan Museum of Art (now housed in the Anna Wintour Costume Centre). 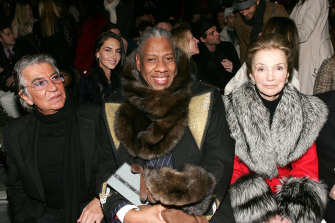 “I became of Mrs Vreeland’s favourite volunteers in what was really like a fine fashion finishing school. Through Diana Vreeland I learned to speak the language of style, fantasy, and literature,” Talley wrote in The Chiffon Trenches.

While Talley’s voice boomed with refinement and knowledge, he was still subjected to racism in the fashion front row and at the high society parties he frequented with Lagerfeld and later Wintour.

Profiling Talley for The New Yorker in 1994, novelist Hilton Als observed Yves Saint Laurent’s muse Loulou de La Falaise cruelly joke while preparing for a photograph: “I will stand there only if André tries not to look like such a nigger dandy.” According to Als: “None laughed louder than André Leon Talley. But it seemed to me that a couple of things happened before he started laughing: he shuttered his eyes, his grin grew larger, and his back went rigid, as he saw his belief in the durability of glamour and allure shatter before him in a million glistening bits.”

Talley managed to endure and see the first Vogue cover photographed by a black American, Beyoncé by Tyler Mitchell in 2018, and a black woman in the White House. Talley styled Michelle Obama and attended Barack Obama’s inauguration with designer Diana von Furstenberg in 2009.

Continuing to search for glamour, Talley discovered a new audience as a judge on America’s Next Top Model and as commentator on the red carpet of The Met Gala, until his dismissal from Vogue. Even with such an impressive list of achievements, Talley predicted in The Chiffon Trenches that he would be remembered most as Wintour’s former lieutenant.

“I’m not belittling myself to say my strength was in my ability to be beside a small, great, powerful white woman and encourage her vision,” he wrote.