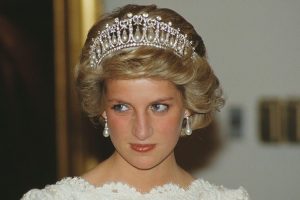 Princess Diana adored the Lover’s Knot Tiara throughout her time as a royal, and the romantic diadem has since been worn by her daughter-in-law Kate, Princess of Wales. But before Diana and Kate wore the jewel, the Queen often turned to it in the early years of her reign.

The Lover’s Knot Tiara is instantly recognisable for its dangling pearls and subtle diamond sparkle.

The late Queen was pictured wearing the Lover’s Knot Tiara in the 1950s, but as she got older, she turned to grander pieces in her collection more suitable for a monarch.

The Queen often wore the Girls of Great Britain and Ireland Tiara or the Grand Duchess Vladimir Tiara, so she lent the Lover’s Knot Tiara to her daughter-in-law Princess Diana in the 1980s.

Diana was particularly fond of the piece, swapping between the Lover’s Knot and the Spencer Tiara from her aristocratic family’s collection.

The Lover’s Knot Tiara is one of the most iconic pearl jewels in the royal collection, and it is so heavy it reportedly gave the late Princess headaches.

Alexandra Michell, Gemologist at Prestige Pawnbrokers Hatton Garden, previously said: “It is large and made from platinum, which is a dense metal and would be at least 95 percent pure, giving a heavy mount to start with.

“The pearls are large and together with the array of varying sizes of diamonds, would add to a hefty weight.

“The tiara has 19 arches and has a single drop oriental pearl suspended from a lover’s knot in each one graduating slightly in size around the piece.

“These drops are flexible and shows a shimmering movement as the head is turned.”

As with any royal jewel, it is hard to give an exact value for the Lover’s Knot Tiara, but it would likely fetch seven figures if sold.

Ms Michell added: “The piece is hard to value due to the complexity of the make and the large number of diamonds to consider as well as natural pearls which are rare to find in this size and shape.

“However, I would think it could be worth in the region of £2million to £4million.”

Kate, Princess of Wales now turns to the Lover’s Knot Tiara more than any other tiara for royal occasions.

She wore the Cartier Halo Tiara on her wedding day for the first and only time, and she has also borrowed the Lotus Flower Tiara on occasion.

But the Lover’s Knot certainly appears to be Kate’s favourite, and her decision to wear it can be seen as a tribute to her mother-in-law and predecessor as Princess of Wales.

At royal engagements, Kate often wears the tiara with the Collingwood pearl earrings which also belonged to Diana.

Queen Mary, the late Queen Elizabeth II’s paternal grandmother, adored it so much that she had her own version of the tiara made.

Pictures show Mary wearing the diadem, and she later passed it on to her granddaughter.