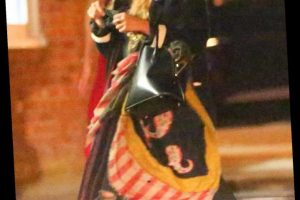 Mary-Kate Olsen was seen enjoying a night out in the Hamptons two months after filing for divorce from husband Olivier Sarkozy.

The Elizabeth and James and The Row designer, 34, was photographed leaving Tutto Il Giorno with a group of friends on Monday evening. Olsen was seen outside dressed casually in a black jacket, distressed charcoal jeans, crimson mules and a patterned scarf thrown over her black top-handle bag.

The designer was first spotted publicly after the news of her divorce broke leaving the New York City office she shares with her twin sister Ashley Olsen in early July.

On April 17, Olsen reportedly signed a petition to divorce the French banker, 51, but due to the coronavirus pandemic, New York courts weren't accepting divorce filings at the time — except in the case of emergency. “A few years ago, having a baby was not a priority for her. This has changed,” said the source.

"Olivier has two grown kids and doesn’t want more," a fashion source told PEOPLE. "Mary-Kate thought he would budge on that and he hasn’t.”

Olsen's commitment to her work life also drove the couple apart. "Mary-Kate is extremely hard working and focused on her business. Her work schedule is beyond disciplined," a source told PEOPLE. "She is the type of person who would never complain about a 12 hour work day. Olivier never understood her drive and passion. He would have loved to have a stay-at-home wife."

END_OF_DOCUMENT_TOKEN_TO_BE_REPLACED

END_OF_DOCUMENT_TOKEN_TO_BE_REPLACED
We and our partners use cookies on this site to improve our service, perform analytics, personalize advertising, measure advertising performance, and remember website preferences.Ok