Home » Matters of the Heart Precede Love and Marriage in Florida

Matters of the Heart Precede Love and Marriage in Florida 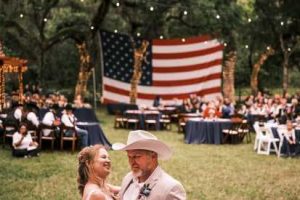 In a pandemic landscape where big weddings still don’t make sense to many, the wedding that Angela Horan and Gary Bergstrom put on March 20 at their seven-acre property in Myakka, Fla., did to them, somehow. Though at the time, Floridians were being encouraged not to gather in groups of more than 10, Ms. Horan and Mr. Bergstrom said they knew most of their 300 guests had been vaccinated or had Covid antibodies. And given the magnitude of the hurdles they had scaled as a couple, they decided an extra-large celebration was worth the risk.

Ms. Horan, 42, and Mr. Bergstrom, 53, met on the dating app Plenty of Fish in February 2015, just after Ms. Horan learned she had cardiomyopathy, a life-threatening heart condition. In December 2014, she was told she would need a heart transplant and, in the meantime, was implanted surgically with a device to keep her heart pumping.

Her choice to join a dating site in fragile health was odd timing, she knows. “But at that point, things were getting worse and worse in my life,” she said.

In addition to her diagnosis, she was going through a divorce and navigating life as a single parent in a new city. She and her three sons, twins Deven and Derek, then 16, plus Aidan, then 5, had moved to Venice, Fla., from San Diego, earlier in 2014. “I finally said to myself, ‘You know what? I’m dying.’ I didn’t know anybody in Florida. I had never really done anything in my life and I wanted to go out and do things.” 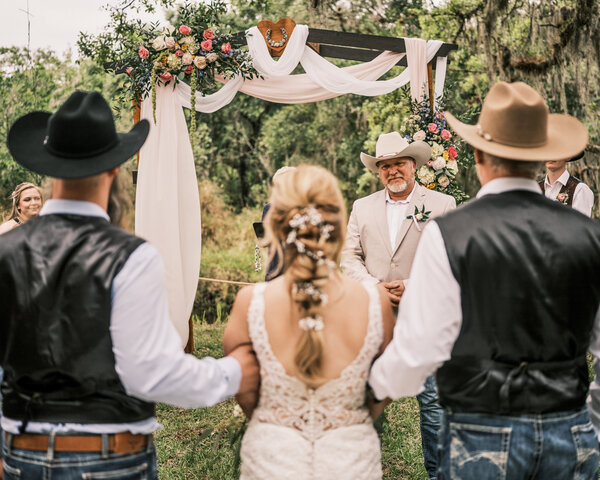 That was even if, while doing them, she had to wear a giant fanny pack with a cord attached to maintain the 24-hour intravenous drip that was keeping her heart pumping.

When Mr. Bergstrom saw Ms. Horan’s picture on Plenty of Fish, she was close to giving up on meeting new people online. “When you go on one of those sites, you get hundreds of men messaging you,” she said. She was overwhelmed and leery of accepting invitations that didn’t seem in line with her profile request to meet friends only. Mr. Bergstrom’s message to her seemed worthy of deletion for a different reason. “We’re very, very different people as far as lifestyle goes,” she said.

Mr. Bergstrom was a corporal in the Marine Corps and is the director of sales at Trident Building Systems, a construction company based in Sarasota. “I like skydiving, scuba diving, snowboarding and basically anything that involves going faster,” he said.

He is divorced and, like Ms. Horan, the single parent of three sons. Jacob is now 31 and has autism; Corey is 23; and Logan, 17. Ms. Horan’s interests involve less adrenaline. “I like karaoke,” she said. “I’m not very adventurous.”

In March 2015, it was Mr. Bergstrom’s persistence that prompted Ms. Horan to accept a dinner invitation from him to Seasons 52, a restaurant in Sarasota. But by then she had been messaging so many potential friends she forgot which ones she told about her heart condition. So when Ms. Horan arrived at the restaurant, he wasn’t sure why she was wearing the fanny pack, and she wasn’t sure why he was curious about it.

“I assumed I had already told him,” she said. Instead, Mr. Bergstrom, then living in Bradenton, had to ask why she had a tube running from the pack under her shirt. She told him about her surgery, and that she was awaiting a heart transplant.

[Sign up for Love Letter and always get the latest in Modern Love, weddings, and relationships in the news by email.]

“It didn’t really matter to me,” he said. “I wanted to laugh and talk and have dinner with this woman.”

They did exactly that. When it was time to say goodbye, though, Mr. Bergstrom wasn’t ready. He came up with a plan. “She said she likes cheesecake, so I told her to follow me to the Cheesecake Factory so I could get her some to take home,” he said. On the way, Ms. Horan rear-ended him at a stop sign.

“Right as it was happening I looked in my rearview mirror and I could actually see the blue light from her phone, and that she was looking down at it.” The collision barely dented either fender.

“But I got out and I looked at the back of the car and the front of her car, and I saw she was sitting there with her head on the steering wheel, like, ‘Oh, my God, I can’t believe I just ran into this guy.’” He shook his head in mock irritation, then motioned for her to put down her window. When she did, he leaned in. Instead of calling her out for her carelessness, “I took her face in my hands and kissed her. I said, ‘Now you will never forget our first kiss.’”

With that, Ms. Horan gave up limiting her life, outside of her boys, to friends only. “We became inseparable,” she said. By May, they had met each other’s sons. By summer, Mr. Bergstrom was attending her medical appointments. They gave him license to introduce her to the more fast-paced lifestyle he was used to.

“The doctor basically said to me, ‘Keep her busy. Do all the things she wants to do that she never got to do’,” he said. It turned out Ms. Horan was more adventurous than she thought. When Mr. Bergstrom suggested they go zip-lining in the Appalachians, she was ready. When he asked her to ride on the back of his motorcycle through New England, where both are from originally — she grew up in Assonet, Mass., and he in Barrington, N.H. — she was instantly onboard.

“Everything we did, we got nonstop ‘What the hell are you doing?’ from people,” Mr. Bergstrom said. “But by that point I had made it my focus to do nothing but make the most of the time we had together.”

Neither knew whether it would be days or decades. “I just knew a lot of people who were on the transplant list didn’t make it to the transplant, because sometimes a heart isn’t available in time,” Ms. Horan said.

In October 2015, Mr. Bergstrom was forced to re-evaluate his ambitions for a life of nonstop thrills when a car stopped short in front of him. He was driving home from work on his motorcycle. “I went down, and the bike landed on top of me,” he said. He broke eight bones and suffered severe tissue damage.

“I’m a Marine Corps vet, and I have just never had to rely on another person to take care of me,” he said. Ms. Horan volunteered anyway.

They had already reached the conclusion they wanted to be each other’s caretakers for life. In November, while he was still recovering, they booked a trip to Las Vegas. There, at Elvis Chapel, they held hands during a commitment ceremony, complete with Elvis impersonator. All that was stopping them from getting married legally was Ms. Horan’s pending divorce, which wasn’t official until 2018.

Returning home to Florida with a newly defined commitment didn’t spare them new trauma. “As soon as we got back she started to die right before my eyes,” Mr. Bergstrom said. “We’d be having a conversation on the couch and she would just black out and slump over.” Her medications were no longer working.

Hope arrived Dec. 19 in the form of a 1:30 a.m. phone call: A heart had become available. Ms. Horan was home in Venice, Mr. Bergstrom in Bradenton. He raced to pick her up. “I broke all the speed rules,” he said. Ms. Horan was too scared to notice. “A lot of people die when they get the surgery,” she said. “I didn’t know if I was ever going to wake up.”

Mr. Bergstrom and her sons were there when she did wake up. Because of her smooth recovery, her doctors were optimistic about her survival odds. Days later, they celebrated Christmas in her Tampa General Hospital room. During her three-month recovery, Mr. Bergstrom figured out a few things. One was an itinerary for further adventures, including skydiving and a motorcycle trip through Europe. Another was how to thank the person responsible for donating Ms. Horan’s new heart.

Mr. Bergstrom and Heather Francis, Ms. Horan’s best friend, had started piecing together the identity of the woman who may have enabled the transplant in the hospital waiting room; hearts must be transplanted within hours of a donor’s death. They scanned police reports and news sites and came up with Laurie Kramer, a woman who had died in the area on Dec. 19. (Laws forbid medical staff from revealing a donor’s personal information). Through Facebook, Mr. Bergstrom contacted Ms. Kramer’s son, Douglas Vose. Mr. Vose of Alabama, N.Y., confirmed that he had authorized the donation.

A friendship with Mr. Vose soon developed. “Hearing from them was a glimmer of hope in a very dark time,” Mr. Vose said. A little more than a year later, in 2017, Mr. Bergstrom and Ms. Horan bought him an airline ticket to Florida. “We met him at Off the Wagons Bar and Grill in Venice, and it was just the most natural thing,” Mr. Bergstrom said. “I felt a connection to him right away,” Ms. Horan said.

At their wedding four years later, Mr. Vose, together with Ms. Horan’s stepfather, Martin Glover, walked her down the aisle in Myakka, where the couple moved in 2018. (Mr. Bergstrom proposed on Dec. 19, 2019, the four-year anniversary of Ms. Horan’s heart transplant.)

Before the couple joined Bonnie Sanchez, an officiant through American Marriage Ministries, under an outdoor arch draped in pink and white fabric, they played a 16-minute video detailing the highs and lows of their journey for guests.

Among the speakers in the film was Mr. Vose. “My mom was a free spirit,” he says. “She was funny, kind, smart and beautiful, and everybody she ever met loved her.” As the video wrapped, scores of guests were in tears.

When Ms. Horan joined Mr. Bergstrom at the altar, with her escorts beside her, more collective tears flowed. By the time Ms. Sanchez pronounced them married 30 minutes later, each had vowed to never take the other for granted, and to forever cherish the other’s heart.

Masks Suggested The bride and the groom, who said they both had the coronavirus about four months ago, did not require their guests to have Covid tests before the wedding. Masks were suggested, and tables at an outdoor cocktail hour and reception were set six feet apart. “We wanted to let them have the best wedding they possibly can,” said their wedding planner, Michelle Borrero of Precious Moment Events, which is based in Sarasota.

Southern Style For dinner, guests chose from entrees including pulled chicken, ribs and brisket from nearby Mission BBQ. Desserts included fruit cobblers and a wedding cake from Publix.

More to Come “Live Like You Were Dying,” the Tim McGraw hit, was the couple’s choice for a first dance at the reception, at which two bands played and three bars were staffed with bartenders. “It’s our theme song,” Mr. Bergstrom said.