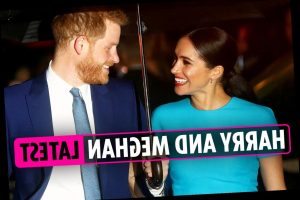 MEGHAN Markle and Prince Harry have signed a deal with Spotify to create exclusive podcasts.

The deal is a massive achievement for the audio streaming service and was announced today via a bizarre two minute recording in which the royal couple make a faux-awkward start to their recording career.

"Shall we start? Ladies first?", Prince Harry says before Meghan responds: "No, say it because I think it sounds really nice with your accent."

Introducing themselves simply as "Meghan" and "Harry" the pair then tease future recordings they'll be making during an upbeat recording that tries achingly hard to be informal and down-to-earth.

The multi-year partnership is with Archewell Audio, an "audio-first production company" created by the Sussexes as part of their charitable foundation Archewell.

The fees involved in the Spotify deal have not yet been revealed, althoughit comes just months after the couple announced a multi-million deal to create exclusive content for video streaming service Netflix.

END_OF_DOCUMENT_TOKEN_TO_BE_REPLACED

END_OF_DOCUMENT_TOKEN_TO_BE_REPLACED
We and our partners use cookies on this site to improve our service, perform analytics, personalize advertising, measure advertising performance, and remember website preferences.Ok