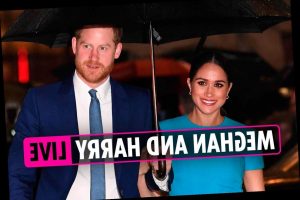 THE Queen has been left heartbroken after Prince Harry doubled down on his plans to spend Christmas in California.

The Queen is reportedly “disappointed” by the pair's decision as she is “missing” her great-grandson Archie.

Meghan and Harry are expected to return to the UK in January for a court date, but according to Vanity Fair will be celebrating Christmas itself in Santa Barbara with their new friends.

It has been widely reported that the royal pair will spend the day with their new BFFs, composer David Foster and his pregnant American Idol wife Katharine McPhee.

Foster has been described as a new parental figure for Harry, with McPhee branding them "like father and son".

END_OF_DOCUMENT_TOKEN_TO_BE_REPLACED

END_OF_DOCUMENT_TOKEN_TO_BE_REPLACED
We and our partners use cookies on this site to improve our service, perform analytics, personalize advertising, measure advertising performance, and remember website preferences.Ok