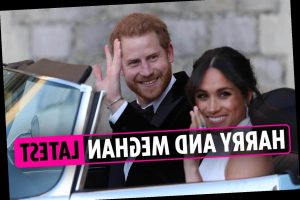 The pair, who split from the Royal Family at the start of 2020, are rumoured to return to the UK this year to time up the loose ends of Megxit.

But they will also face a number of awkward run-ins with Kate Middleton and Prince William – not least the unveiling of a statue of Princess Diana that Wills and Harry commissioned together, the Queen's 95th birthday and Prince Philip’s 100th.

The ‘Fab Four’ seemed frosty when they were last seen together publicly at the Queen’s Commonwealth Day Service in March, shortly after Megxit was confirmed.

Royal sources suggest the two couples are still barely talking – and if anything have grown further apart.

“I think it’s going to be very awkward if they do meet up,” Phil Dampier, author of Royally Suited: Harry and Meghan In Their Own Words, told The Sun Online.

“From what I am told the rift is not a lot better at the moment – they are not talking a lot.

Meghan wrote: "For this new year, the only thing I aim to do is to approach life playfully.

"To laugh and enjoy, to keep my standards high but my level of self-acceptance higher."