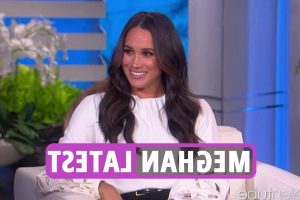 MEGHAN Markle will take part in another bombshell TV interview this evening – this time with US talk show host Ellen DeGeneres.

The Duchess of Sussex is making a surprise appearance on Ellen's chat show at 8pm UK time this evening, 3pm New York time.

Ahead of her appearance a teaser trailer was released showing Meghan telling Ellen about how happy her life was before joining the Royal Family.

Fascinated royal watchers around the world will be tuning in later this evening, wondering whether Meghan will repeat her shocking claims of racism at the heart of the royal family.

Meanwhile Good Morning Britain's Susanna Reid today made a brutal dig at Meghan ahead of her Ellen interview.

After watching a teaser clip which focussed on Meghan talking about her tough upbringing, Susanna "There we go – let's never mind the private jets".

She later added: “I find it’s getting increasingly hard to defend" in reference to Meghan and Harry abandoning their duties in the UK citing privacy, while signing up for interview with some of American showbusiness' biggest names.

Read our Meghan Markle live blog below for the latest updates…