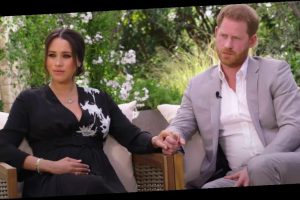 “Were you silent, or were you silenced?” asked Oprah Winfrey to Meghan Markle and Prince Harry in the couple’s forthcoming interview about their experience of royal life. Markle might have cautioned from opening up in Oprah’s interview teaser, but wearing her mother-in-law’s diamond tennis bracelet said more than enough.

“My biggest concern was history repeating itself,” said Harry in the teaser, which seems to be referring to the tabloid’s negative effect on his mother’s mental health. Markle, by choosing to wear a piece of Diana’s personal jewelry, suggests that the couple is drawing parallels between how the press treated Diana in the ’90s and the media bullying that Markle has experienced since being a member of the royal family.

Keeping reading ahead for some of the exact pieces worn by Meghan Markle in the Oprah interview.