A MUM-OF-THREE has bravely told how her best friend’s fiancé brutally attacked her after she leapt in to protect her pal.

Amy White, 30, from Rustington, West Sussex, was beaten up by Alexis Poupard, 34, who left her with a broken jaw and cheekbone, a fractured eye socket and loose front teeth. 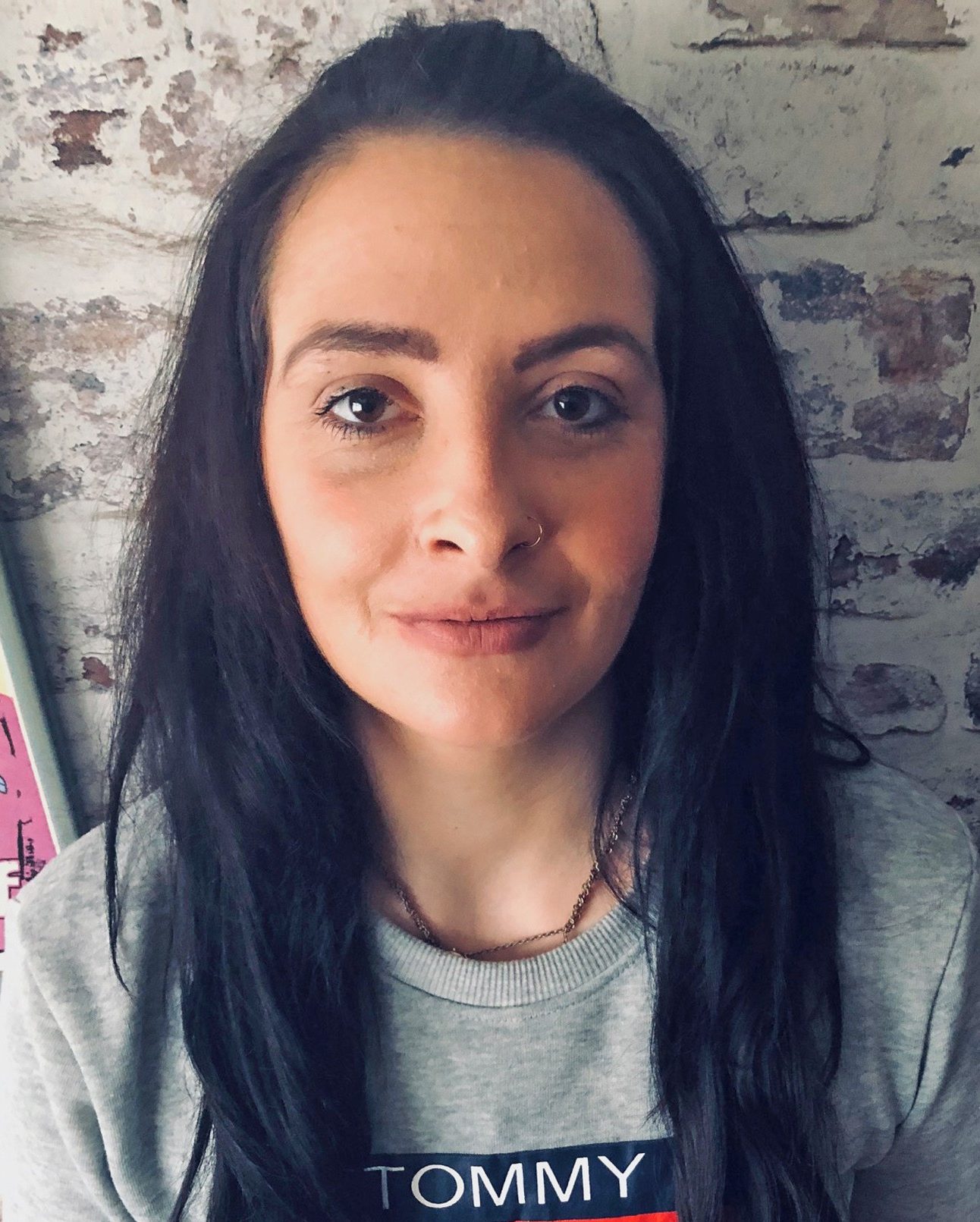 Amy is now unable to work due to the PTSD she suffered after her horror ordeal.

Poupard was jailed for nine years and three months after pleading guilty to attacking Amy and her two friends.

Amy told Fabulous Digital: “It just shows you how you never really know someone. We were so lucky to escape with our lives. We don’t want other women to become a statistic.”

Amy had met Laura Poupard, a stay-at-home mum, in 2013 at a barbecue and the two became close friends. 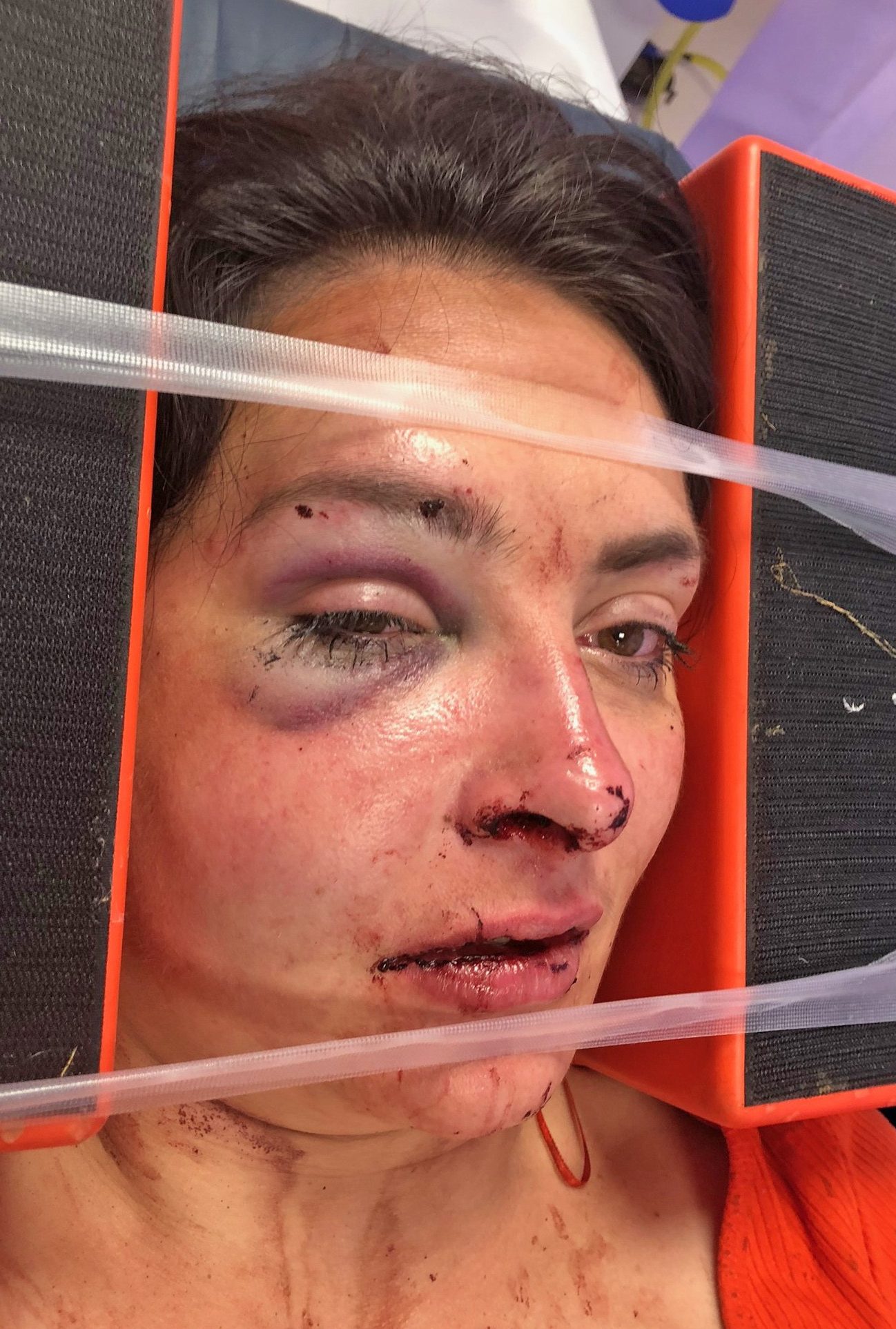 By September 2017, Laura was pregnant and engaged to her boyfriend Alexis Poupard.

Amy said: “Alexis was not the kind of man you messed with. He was huge with broad shoulders and bulging muscles.

“He was quite intimidating. But, when Laura told me that Alexis had proposed, I was so excited for her.”

Alexis was not the kind of man you messed with. He was quite intimidating

In May 2018, Laura had her fourth baby and a few months later, in August, days before her wedding, she invited Amy and her kids round to her house.

Amy said: “It was a scorching hot summer and we were looking forward to relaxing in the garden. 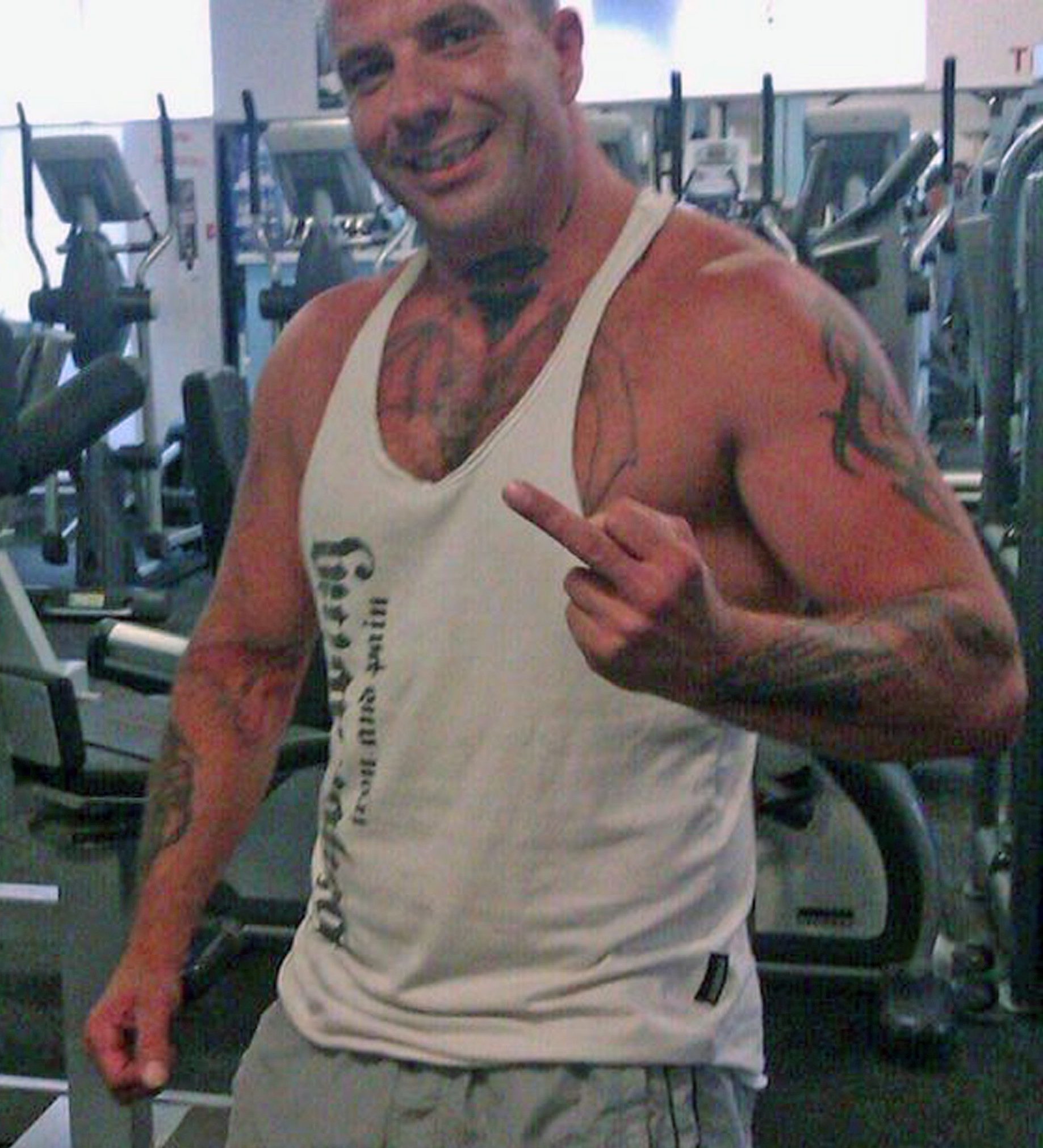 “When Alexis returned home from work later that day, he began swearing and banging around in the kitchen. Laura handed me her baby and went inside to find out what was wrong.

“I could hear Alexis shouting then Laura fled outside telling me that he was angry that she’d not done the washing up.”

He flung himself at my friend. Without thinking I jumped in front of her and pushed her out of the way

Amy and Laura cleaned the kitchen while Alexis went to the shop. The pair took the children back to Amy’s house to avoid Alexis.

By 10.30pm that night, Laura had run out of baby milk and nappies. The shops were shut so they returned to Laura’s home to fetch some.

Amy explained: “I offered to go into the house with her, along with our other friend. We had left the kids at home with my eldest who was 13. 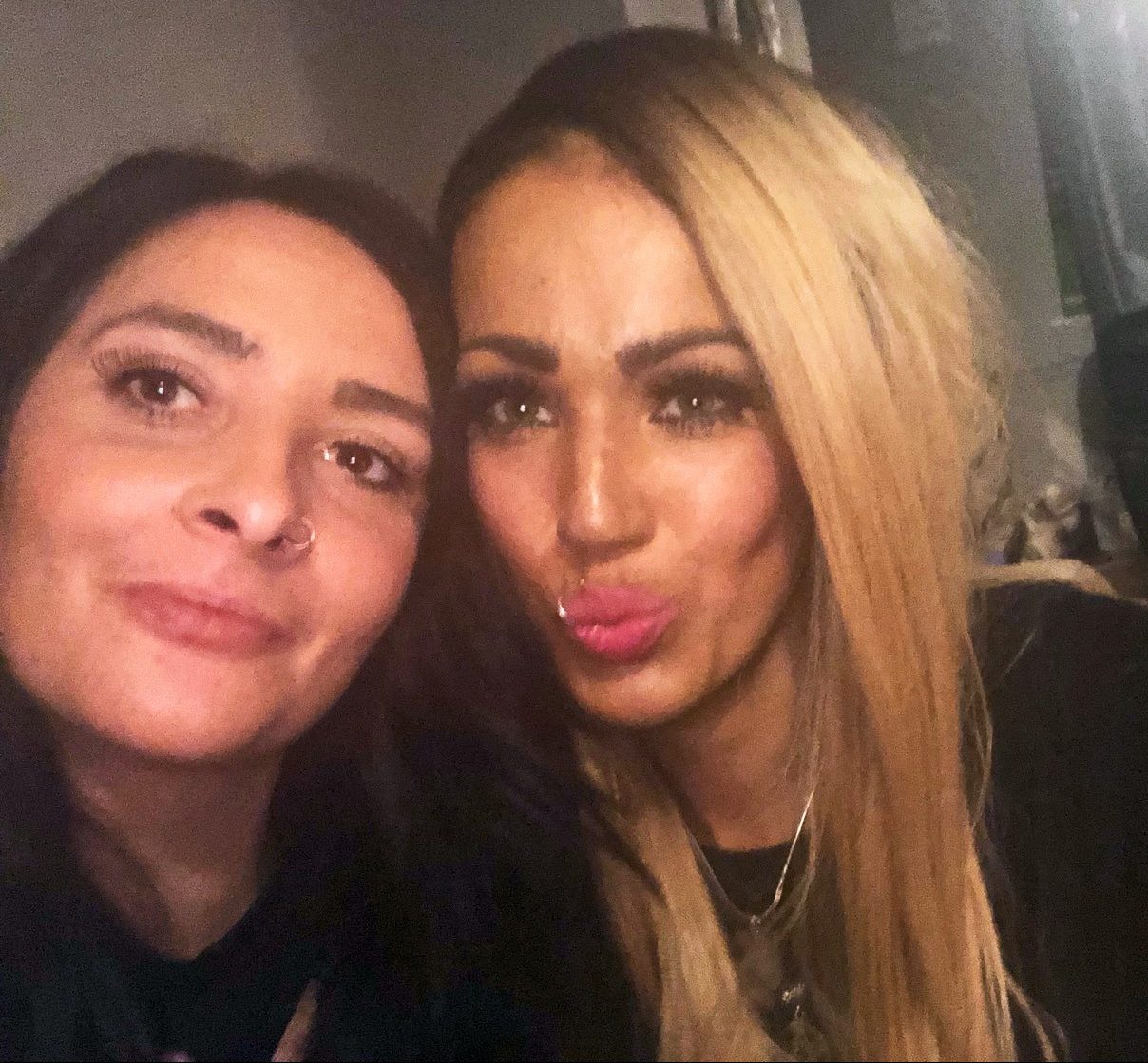 “As our taxi driver pulled up outside Laura’s house, I asked her to wait for us. But as we climbed out of the car, I spotted Alexis standing at the front door, looking furious.

“He marched over asking where we’d been. He flung himself at my friend. Without thinking I jumped in front of her and pushed her out of the way.

“Then, out of nowhere, Alexis punched me repeatedly in the head and I fell to the ground. My head pounded. The last thing I saw was Alexis’ shoe above my head before everything went black.

“When I came around, Laura was sobbing. I lay in a pool of blood, my cheeks were throbbing and I could barely open my eyes.

“I climbed to my feet and we rushed to the taxi driver, who had waited for us. 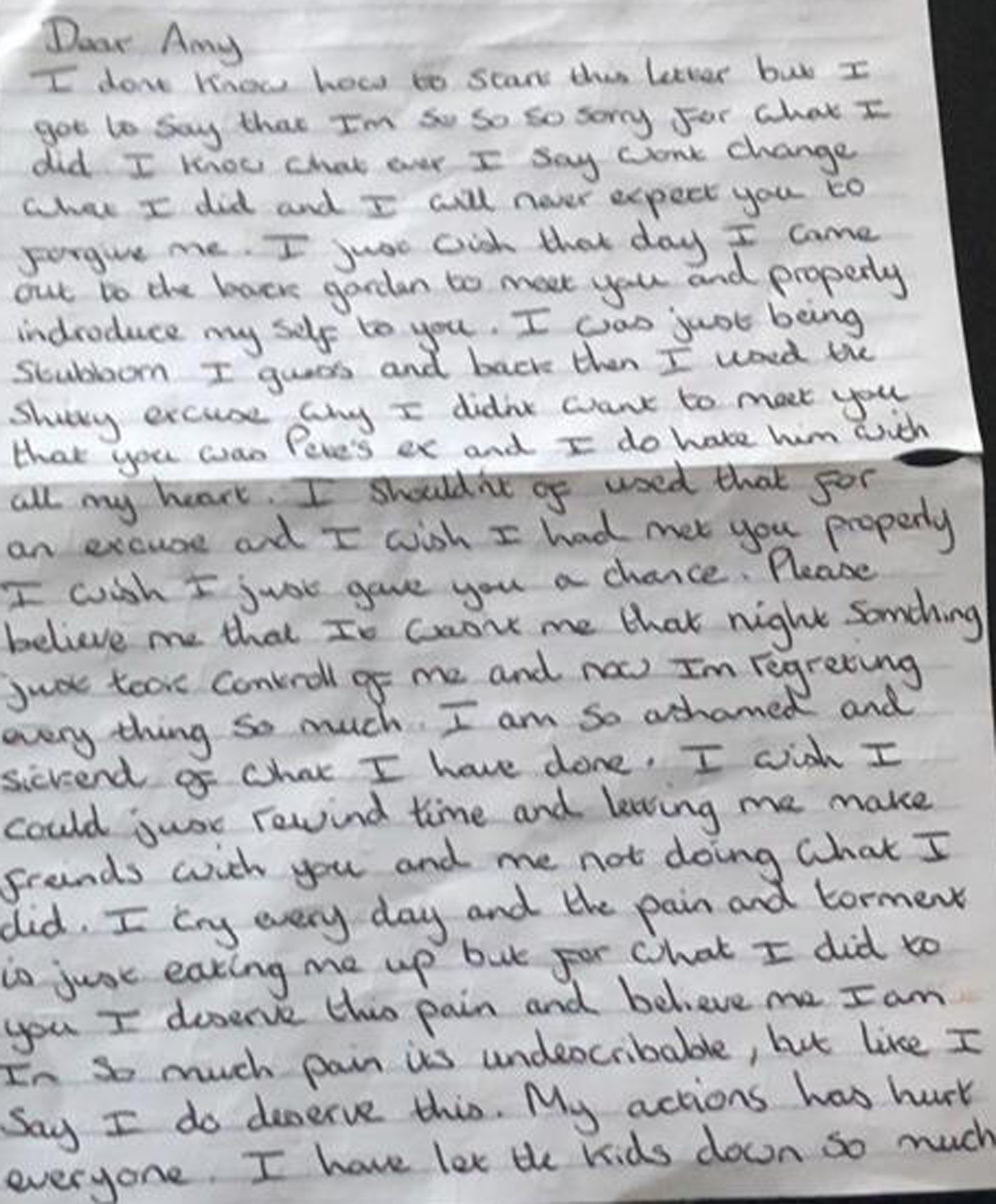 “The taxi driver had called the police. She drove us back to my house, and officers and an ambulance arrived minutes later.”

At Chichester Hospital, doctors treated Amy with a split on her mouth palette, broken jaw and cheekbone, and a fractured right eye socket. Alexis had even made Amy’s front teeth loose.

I lay in a pool of blood, my cheeks were throbbing and I could barely open my eyes

Amy said: “Laura had lost the hearing in her left ear and her lip was split after he punched her in the face.

“Meanwhile Alexis was arrested and remanded in custody. After three days in hospital, doctors removed part of my jaw and installed metal plates in a four-hour operation. 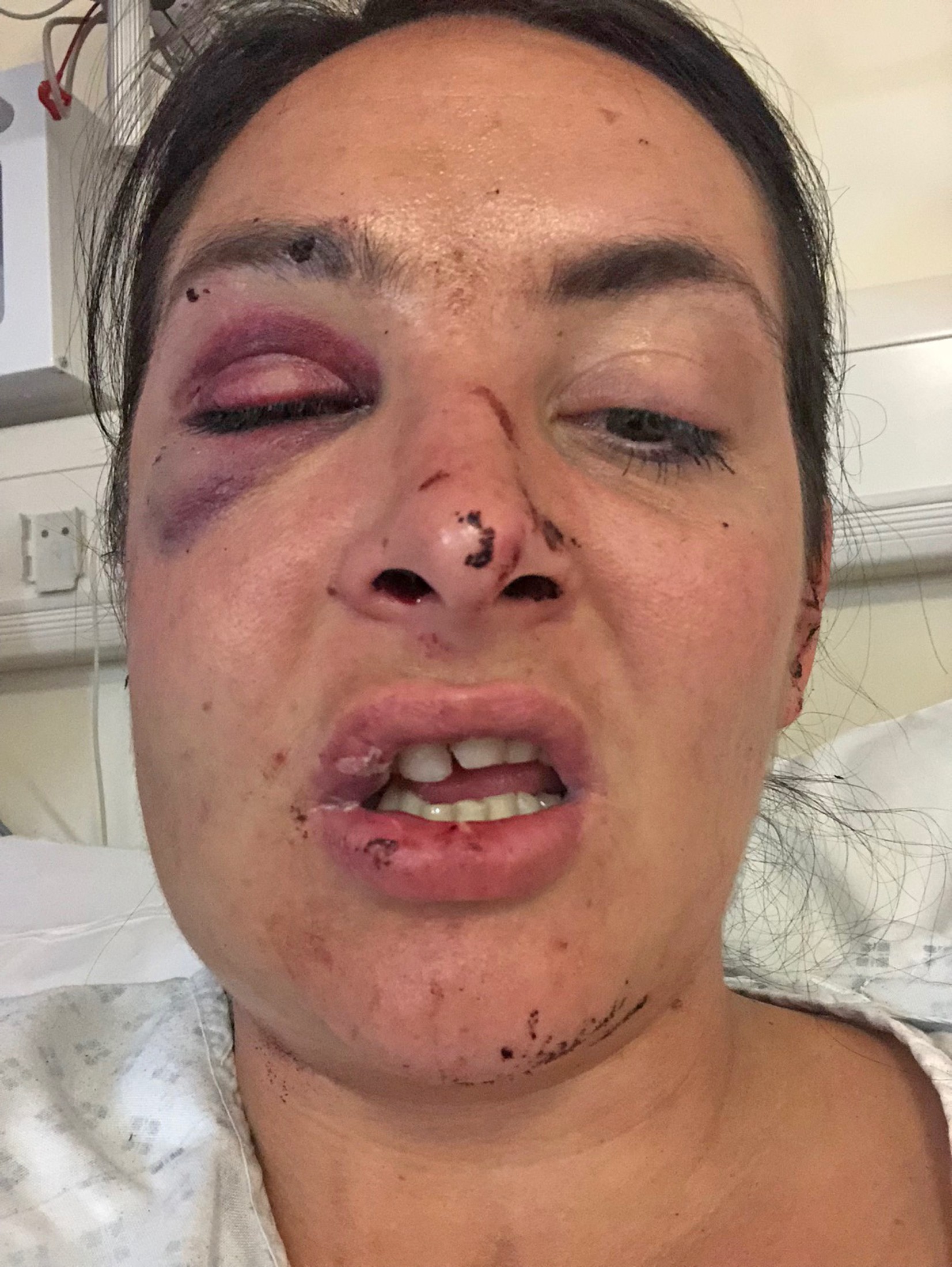 “For the next month, I could only eat liquidised food and had to give up my job as a carer.

“I suffered with anxiety and was diagnosed with PTSD. I was devastated that I’d suffered such horrific injuries. I felt lucky to be alive.”

He was jailed for nine years and three months.

For the next month, I could only eat liquidised food and had to give up my job as a carer

Amy said: “I was pleased he was locked up, where he can’t hurt anyone else.

“Laura called off the wedding immediately and she’s raising her baby alone.

“Now we’re closer than ever. I’m telling my story as a warning to others.”

Laura, who changed her surname by dead poll to Alexis’, told Fabulous Digital: “Seeing Amy get attacked was harrowing, I thought Alexis was going to kill her.

“I’ve been left with hearing loss in my left ear and it’s a constant reminder of what happened.”

Where can you get help?

You don't have to suffer in silence.

If you are experiencing domestic violence or someone you know is there are groups that can help.

Devon was abused by her evil ex – who even sniffed her knickers to make sure she wasn't cheating on him.

This woman was battered on Valentine's Day in a terrifying five-hour ordeal.

Disney’s Beauty and the Beast promotes domestic abuse and Aladdin damages the self-esteem of those with darker skin, experts claim.