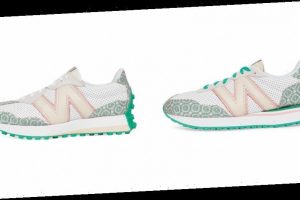 Following 2020 to remember for both New Balance and Casablanca, the two brands have reunited for the final time this year to again reimagine the 327 silhouette, as well as the lesser-known 237 model.

After making its debut at Paris Fashion Week earlier this year, the pair officially released its first duo of 327 ahead of summer, before returning to the silhouette for more stripped-back iterations later in the year.

Now joining forces for the fourth and final time of 2020, New Balance and Casablanca introduce two co-branded variations of the 327 and 237 silhouettes, both of which boast textile overlays of the latter’s striking monogram pattern around the toe and heel — as well as down the centre of the tongue.

The 237 sits on a white and pink gum rubber sole while the 327 features a green waffle effect underfoot. Atop the EVA midsole sits a perforated white leather upper which houses an oversized “N” logo on the outer side wall, alongside contrasting green or white laces.

In other sneaker news, Dime and Reebok have reunited for a collaborative BB 4000 capsule.
Source: Read Full Article