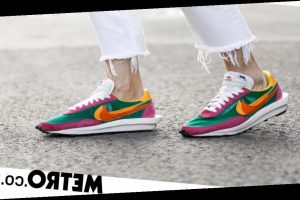 Nike has officially got the hype.

The sportswear brand has topped the Lyst Index, a quarterly ranking of fashion brand and products worked out by analysing shopping behaviour of more than nine million people.

Nike beat Off-White and Gucci to the number one spot, becoming the first non-luxury brand to get first place since Lyst began doing its index in 2017.

In their report, Lyst notes that Nike has reported a 75% increase in digital sales (which may be in part due to lockdown and growing online shopping habits) since April, accounting for 30% of their total revenue.

Months spent working from home may be why the brand has seen a 106% increase in demand for loungewear in the last three months, too.

Oddly, Nike hasn’t jumped on the face mask train by releasing their own tick-emblazoned face covering, but that hasn’t slowed their success.

Lyst also points to the brand’s response to the killing of George Floyd and the Black Lives Matter movement as a reason for Nike’s recent success.

Nike pledged £30.78 million to organisations furthering social justice and changed their slogan to ‘Don’t Do It’ in a video that received millions of likes on social media.

On the more traditional high-end fashion side of things, in the last few months Nike also ran a massive raffle for access to buy the Air Jordan x Dior sneakers.

In second place on the Lyst Index, which is put together using search data from both Lyst and Google, conversion rates, sales, and brand and product social media mentions and engagement stats, is Off-White, which managed to nab the top spot for the last three quarters running.

In third place is Gucci, followed by Balenciaga, then Prada.

The hottest brands of the last quarter, according to Lyst

In terms of the hottest products, some different brands make the top ten.

The Birkenstock Arizona double strap sandals, which cost upwards of £60 a pair, get first place, followed by a face mask by Marine Serre, and the Loewe basket bag.

If you managed to get that pink H&M dress we highlighted back in June, claps for you – that snuck into the 9th spot on the hottest womenswear products list.

For men, the must-have item is the Off-White arrow logo face mask, followed by the Brunello Cucinelli double buckle suede sandals, then the Asics Gt-1000 7 sneakers.

The JW Anderson Colourblock patchwork cardigan – you know, the one Harry Styles wore back in February and that sparked a crocheting trend – comes in at number eight.