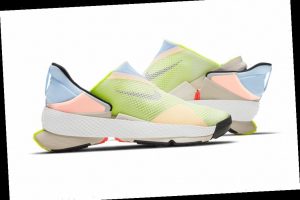 Nike is stepping into the future.

On Monday, the footwear manufacturing company unveiled its latest shoe design, a pair of slip-on sneakers that come without laces.

Named the Nike GO FlyEase, the new shoes from Nike are being touted as the brand's first "hands-free" sneaker and are designed to be put on and taken off without any difficulty.

The shoes are built around a bi-stable hinge, according to a press release from the company, which "enables the shoe to be secure in fully open and fully closed states."

The Nike GO FlyEase are set to be released by invite for select Nike members later this month on Feb. 15, before a wider release is planned for later this year. The shoes will retail at $120.

Amid the ongoing COVID-19 pandemic, Nike worked to craft the pair of shoes for a time where people are working from home more than ever, and are looking for something comfortable — a quick — to slip on.

"This shoe really responds to our current-day situation living in these Covid times," Sarah Reinertsen, manager of FlyEase Innovation at Nike, said in an interview with CNBC. "This is actually an innovation that has been cooking up in our innovation kitchen for a little while … but it just came out right at the right time, when we needed it more than ever."

Want to get the biggest stories from PEOPLE every weekday? Subscribe to our new podcast, PEOPLE Every Day, to get the essential celebrity, entertainment and human interest news stories Monday through Friday. Get a taste of the podcast below.

Noted by Reinertsen that the shoes are not meant to be used for more involved sporting activities, but rather more casual undertakings, she adds that the Nike GO FlyEase shoes are "shoes easier for everybody."

"We have been using laces for a long time," Reinertsen added. "But … a lot of times [people] are trying to work around those laces, they're trying to use one foot to anchor the shoe and slip out. Laces are kind of a hassle. We wanted to make shoes easier for everybody."

According to CNBC, citing Reinertsen, Nike plans to expand on the design of the soon-to-be-released shoes and create more slip-on footwear in the future.

The brand is also hopeful that the phased launch that the Nike GO FlyEase will release under will allow more shoppers to join its free membership program, which boasts workout classes and podcasts as well.