Home » Fashion » No Joke, Amazon Put All the Best Fashion, Beauty, and Home Products on Sale This Weekend 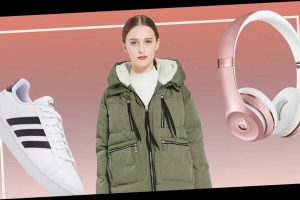 For Amazon, a three-day weekend means one thing: incredible deals on the most popular products. The retailer never fails to tempt us with major savings on all our favorite brands, and this weekend is no exception.

Amazon's holiday weekend sale includes everything from affordable loungewear to everyday sneakers to high-tech headphones and home appliances. We found plenty of sale sweaters under $50, including this simple Calvin Klein long-sleeve turtleneck for $42. Pair the sweater with these $37 Levi's skinny jeans or these $32 high-waisted leggings and finish off the outfit with the Orolay Thickened Down Jacket for $150.

The sale also includes tons of sneakers and boots. These quilted Steve Madden sneakers are over half off at just $30. You can also get classics, like the Adidas Grand Court Sneakers and Cloudfoam Pure Running Shoes, for discounted prices. If you're still in the market for winter boots, check out these lace-up Ugg boots on sale for $94.

If beauty products are more your thing, you'll be happy to know that you can score the Belei Retinol Vitamin A Refining Moisturizer for $28 and a set of two Benefit mascaras and one eyeliner for just $35. Hair products and tools are also part of the beauty section, including the viral Revlon One Step Hair Dryer and Volumizer Hot Air Brush for $42.

Finishing off with home and tech deals, the sale includes everything from candles to throw blankets to vacuums. The Capri Blue Volcano Tin Candle is nearly half off, while the Dyson V7 Motorhead Cordless Stick Vacuum Cleaner is going for $18 less than the original price. You can even buy a pair of Apple AirPods for as low as $129.

While you enjoy the three-day weekend, you might as well treat yourself to some shameless scrolling in Amazon's sale section. If we were you, we wouldn't pass up on these deals. Shop all 40 of our Amazon fashion, beauty, and home sale picks, below.