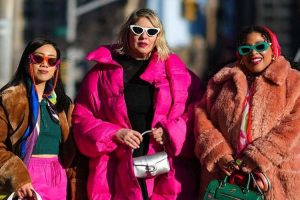 Nordstrom's major winter sale is here with over 38,000 — yes, you read that right — 38,000 deals on everything from Jennifer Aniston's favorite jean brand to Tory Burch bags. And while we've already rounded out 25 top markdowns to shop right now, there's a secret section that we definitely don't talk about enough: the designer section.

It's a bit of a fashion insider secret, but Nordstrom puts deals on every designer item in this section. We're not just talking household names like Proenza Schouler or Alexander McQueen — although it obviously has plenty of that, but also extremely cool emerging brands that all fashion editors are wearing front row at NYFW. This section is the absolute best place to find the sales worth shopping, while also serving as the perfect place for fashion inspiration.

Right now, the discounts are incredible, and some of the deepest we've seen in the past couple of months. If you're looking for a classic, the top-selling Tory Burch McGraw leather tote is $279. For something a little bit different, there's a bold red frill bag by the designer every cool girl is wearing, Molly Goddard. Goddard rarely goes on sale, so this is a great opportunity to buy something from a brand featured on the pages of Vogue that's not necessarily on everyone's radar yet.

The designer sale section has plenty of luxury pieces, of course, but there are also some practical essentials as well. JW Andersons's chain rain boot is now $270, and it's the only rain boot we've seen that we actually want. Collina Strada is known for its colorful prints, patterns, and fashion shows that often involve dancing, but it also made the coolest face masks that sold out instantly at the start of the pandemic. Now its popular floral face mask is on sale for $30. For an unexpected addition to your ear party, Sunnei makes rubberized hoop earrings that look like they're dipped in paint, and now they're under $150.

The Nordstrom sale ends on February 27, which means there is still plenty of time to shop. But these incredible designer deals are always among the first to go. So make sure to shop now, and if you don't know where to start, we've outlined our favorite 15 items.