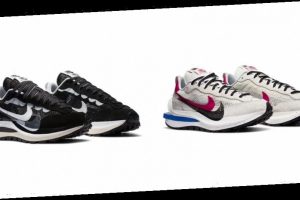 sacai and Nike‘s highly-anticipated Vaporwaffle has been teased since the beginning of 2020, and now, with its oft-delayed release seemingly around the corner, official images for two of its four colorways — “Red/White/Blue” and “Black/White” — have surfaced. Espousing the doubled-up design ethos sacai founder Chitose Abe established on 2018’s wildly popular LDWaffle, the Vaporwaffle provides a detailed homage to Nike Running history by bringing design cues from classic models into a new-jack style.

“White/Red/Blue” is the more colorful of the duo, adding dashes of red and blue atop its white and cream base for a look that’s half high fashion and half Blue Ribbon Sports. On the other hand, “Black/White” keeps things stark with a yin and yang of light and dark shades. Both are constructed from a mixture of mesh and suede. From an embellishment standpoint, details are doubled up from the top down: there’s two tongues (one mesh, one nylon), two Swooshes (one printed, one made of leather), two sets of laces and two midsole pieces.

Above the double-stacked midsole sits a “lip” that rises into the heel, and almost gives the effect of an open mouth from the side angle. This sharply-pointed piece may be a reference to the ZoomX Vaporfly NEXT%‘s midsole — hence the shoe’s nom de guerre. Finishing off the look are doubled-up branded hits on the heel, further painted detailing on the midfoot, two co-branded tongue tags and classic outsoles.

The sacai x Nike Vaporwaffle in “White/Red/Blue” and “Black/White” have been rumored to release on Nike SNKRS come November 6, with a retail price of $180 USD, but this has yet to be confirmed by Nike.