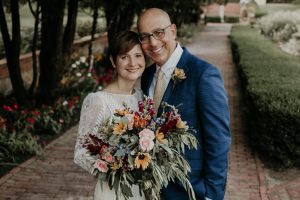 A year into his relationship with Abigail Pesta, Joel Oestreich, a political science professor at Drexel University in Philadelphia, moved to Africa.

Ms. Pesta, 52, a Philadelphia-based journalist and author, had mixed feelings about his departure. “It was sad to see him go,” she said, but she also wanted him to enjoy the experience — Mr. Oestreich, 56, would be teaching at the University of Abomey-Calavi in Benin, on a long-planned Fulbright fellowship.

From the first week that they met on the dating app Bumble in August 2017, Ms. Pesta and Mr. Oestreich seemed perfectly suited for each other. But it was difficult to navigate their busy schedules.

When Mr. Oestreich tried to arrange for a first date with Ms. Pesta, he learned she was in fact in Texas, “staying up late reporting the story of a de-radicalized jihadi bride,” as she put it, for Texas Monthly magazine. Ms. Pesta is the author of “The Girls: An All-American Town, a Predatory Doctor, and the Untold Story of the Gymnasts Who Brought Him Down.”

Mr. Oestreich went on with his usual routine, which included getting up early to go rowing on the Schuylkill River before teaching class at Drexel.

The next night, Ms. Pesta called to say she was back in Brooklyn, where she lived at the time, and they booked a date for the following weekend, at a restaurant in Manhattan.

Mr. Oestreich walked into the restaurant and spotted Ms. Pesta speaking on her cellphone with a concerned look on her face. It seemed for a moment that the first date might not work out, after all.

When Ms. Pesta got off the phone, she explained that it was her brother calling to say that he’d been in a bicycle accident in the city — but he had assured her that he was feeling good enough to take himself to a hospital.

The two proceeded to sit down to a three-hour lunch.

“I thought she was pretty and sounded very smart,” Mr. Oestreich said. “I liked that she was a writer, and a really creative person.”

Ms. Pesta said she found Mr. Oestreich to be “smart, funny and handsome. I loved that he traveled and lived around the world” — to places including Bangladesh, Nigeria and India — “and the many stories from those trips that he tells so wonderfully.”

When Mr. Oestreich returned from Benin in March 2019, the couple picked up where they left off, and were engaged in February 2020, just before the outbreak of the coronavirus.

They were married Sept. 2 at the West Baden Springs Hotel in West Baden Springs, Ind., before 11 guests. The officiant was Rosemarie Aquilina, the Michigan circuit court judge who presided over the sex abuse trial of Larry Nassar. The bride had met Judge Aquilina while researching her book, which, as it happened, was published in the summer of 2019, just in time for Mr. Oestreich’s homecoming.