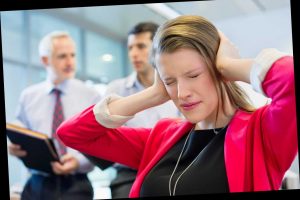 WITH most of the UK now working from home due to the coronavirus pandemic, people have been sharing their worst work horror stories.

From open-plan offices to fast food restaurants, people have revealed horrifying tales from every kind of workplace. 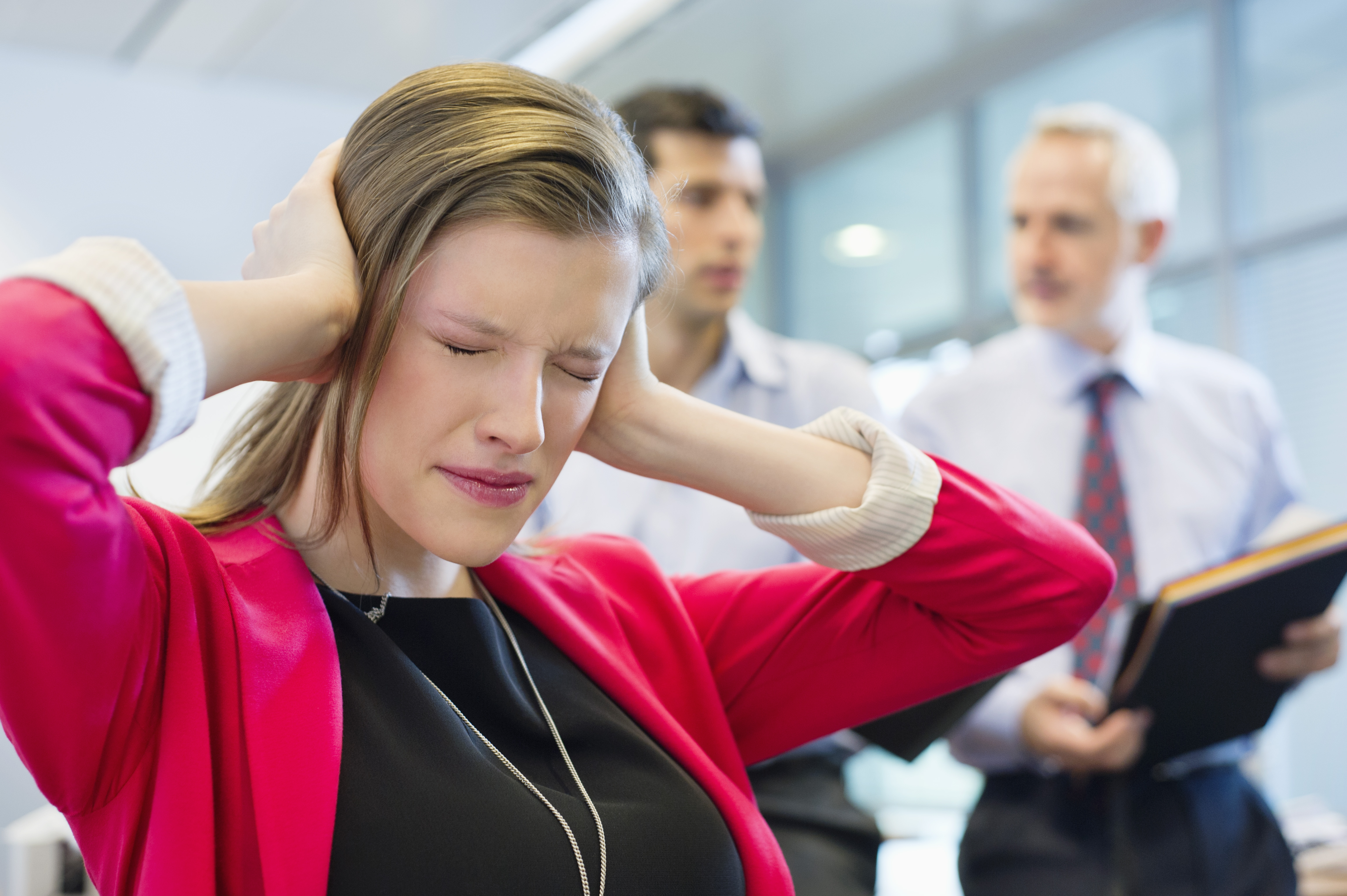 A thread popped up on Reddit after someone asked ‘what's the worst coworker you've ever worked with?’ – and it's racked up more than 14,000 comments.

A good number of the people in question were either fired or ‘quit’, and we can see why.

One person revealed they worked in an office with someone called the ‘Chanel Bandit’, after their boss implemented a ‘no scent policy’.

They wrote: “One woman, who was already insufferable, was so offended by it that she snuck in her perfume collection.

“She'd walk down the halls and spray perfume into empty offices or cubicles when no one was looking or before everyone arrived in the morning.”

This went on “for months”, and people suspected it was her but had no proof.

They continued: “She was finally caught on camera in the act. She'd left for three weeks vacation and was unaware that we had installed cameras after a break in.

“Some of us already suspected her, as the Chanel Bandit mysteriously stopped spraying while she was away.

“She quit right after she was caught. None of us were sad to see that cedar scented psycho leave.”

And this person claims to have worked with the worst person “no contest”.

They worked at an engineering firm, and it became apparent that one of the workers – and his family – was living at the office.

He explained workers would find trails of food, a mattress and plugs clogged with hair.

He said: “It was the literal crackhead I worked with for 4 months that was also secretly living in the office and being completely nonsensical when he was actually "working".

“We found a mattress folded up in the warehouse after he was let go and an actual, brand new crack pipe (with a price tag on it, to boot) squirreled away back there.

“He and his family (not just him living in the office!) left discarded food everywhere like pizza crusts in the toilet brush holder in the bathroom (wat even) and they left hair in the sink in the bathroom as they were obviously bathing in there, too, as we had no actual bathing facilities in the office.

“One day during his tenure, he sent an e mail saying his alarm didn't go off and he'd be in at x time, which kept getting moved back later and later. He eventually showed up at 4:40 pm and we closed at 5 pm, lol. See comment above about secretly living in the office.”

Unsurprisingly, the bloke revealed the employee-come-tenant was swiftly fired.

Revealing their worst co-worker, one person said: “Worked with a girl who would sometimes just lay in the floor and play on her phone.

"She would routinely flip out about something her boy friend did and just start screaming curse words, sometimes in front of customers. She was eventually fired for smoking weed while on the clock.”

This newbie wrote: “I had a manager once who dumped trash on my desk my third day there. She said it was to remind me that taking out the trash was part of my job description (it wasn’t, I was a research assistant at a mortgage firm).”

And this person broke the golden rule of never heating up food smelly food in the office microwave.

This worker revealed: "I'm pretty cool about eh, people all have their role to play, but one time we had a secretary that would microwave eggs and canned tuna every morning in a bowl.

"Now… I am not a violent person, but the smell generated from microwaved eggs and canned tuna is down right repulsive by anyone's standards." 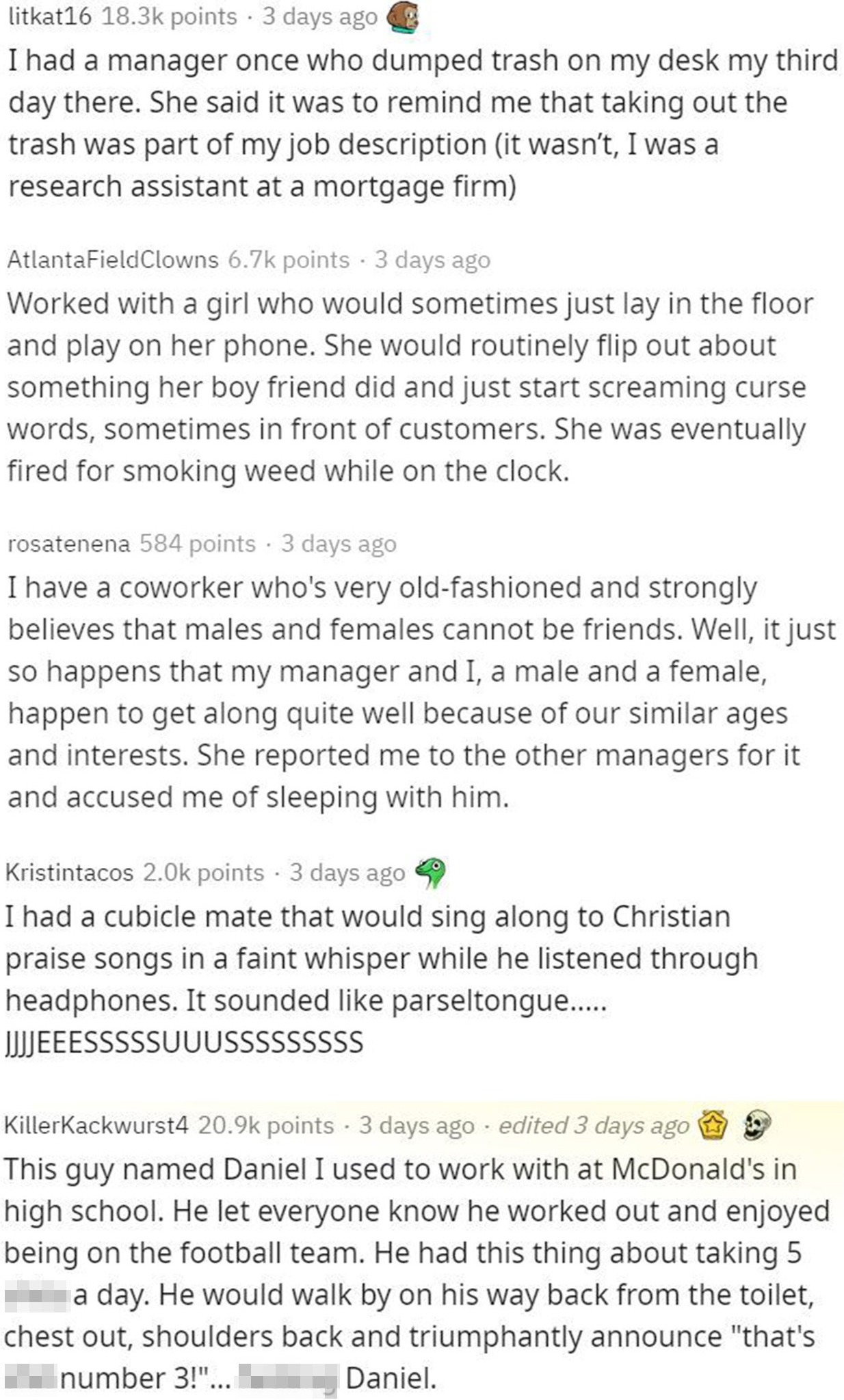 While this woman had an outdated mindset, as this worker revealed: “I have a coworker who's very old-fashioned and strongly believes that males and females cannot be friends.

"Well, it just so happens that my manager and I, a male and a female, happen to get along quite well because of our similar ages and interests. She reported me to the other managers for it and accused me of sleeping with him.”

This co-worker shared: “I had a cubicle mate that would sing along to Christian praise songs in a faint whisper while he listened through headphones. It sounded like parseltongue….. JJJJEEESSSSSUUUSSSSSSSSS.”

And this horrified worker added: “This guy named Daniel I used to work with at McDonald's in high school. He let everyone know he worked out and enjoyed being on the football team.

"He had this thing about taking 5 s***s a day. He would walk by on his way back from the toilet, chest out, shoulders back and triumphantly announce "that's s**t number 3!"… f*****g Daniel.”

Plus you can now get paid £60 to sleep as a firm is looking for a bed tester – and you get to work from home.

Plus the Queen is keen to get back work ‘as soon as possible’ and is determined to ‘work harder than ever’, sources say.

While Brits are turning to DIY to beat boredom in the lockdown, with painting & garden fences the most popular jobs.

END_OF_DOCUMENT_TOKEN_TO_BE_REPLACED

END_OF_DOCUMENT_TOKEN_TO_BE_REPLACED
We and our partners use cookies on this site to improve our service, perform analytics, personalize advertising, measure advertising performance, and remember website preferences.Ok