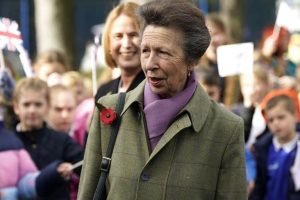 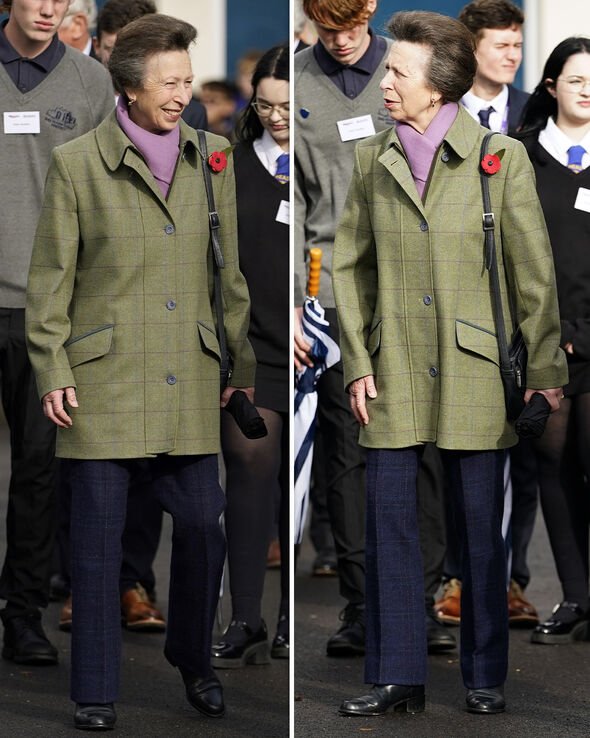 As the patron of the Royal Navy and Royal Marines Charity since 2007, Anne works closely with the armed forces. Today, the Princess Royal presided over the opening of a new community hub in Gosport, near Portsmouth. The community centre will provide support to families with members serving in the UK’s armed forces.

Princess Anne is a fan of the colour green and owns many green coats.

Today she wore one of them – a khaki jacket with navy blue and lighter blue straight lines, creating a subtle tartan pattern.

The coat had a zip and a wide collar, as well as buttons running down its centre.

It matched Anne’s trousers well, as those too had a subtle checkered pattern on them, and were navy blue.

Anne completed her look with a pair of sturdy, black loafers, and, underneath her coat, she had tucked a purple scarf.

She also wore a poppy on her left lapel, a nod to the armed forces and the upcoming Remembrance Sunday, which will be commemorated later this month.

Anne’s coat could also be in honour of the armed forces as it was military in style – the colour, as well as the pockets and the belt at the back, referred to the army.

The Princess’ hair was styled in its usual updo, and she wore minimal make-up.

The earrings were tiny gold diamonds, hanging from a tiny gold stud.

Anne has worn these jewels many a time before, usually pairing them with other gold jewellery pieces.

Today, the Princess also sported a slick of dark pink lipstick, which matched her poppy badge.

The Royal Navy and Royal Marines Charity put forward a £400,000 grant to set up the centre in Gosport, which Anne opened this afternoon.

The local hub is expected to help 435 children in the Gosport and Fareham area of Hampshire.

Mandy Lindley, who heads up the relationships and fundings sector of the charity responsible for funding the project, said she was “proud” of the centre’s construction, which came with “personal significance” for her and her family.

She said: “As a Royal Navy veteran and Gosport resident of over 40 years, I am part of a proud and significant Royal Navy community in this area.

“My husband and I both served and my family have experienced some of the unique challenges and difficulties that come with service life, experiences shared by many families here in Gosport.

“Therefore, the creation of the Gosport Community Hub to support local Royal Navy families and the wider school community has personal significance for me, and I am proud that the Royal Navy and Royal Marines Charity has been at the forefront of delivering this milestone facility.”

The new community centre has been built in partnership with the Gosport and Fareham Multi-Academy Trust, with executive headteacher Chris Willis commenting: “The hub is part of our wider Gosport community strategy, which focuses on raising the aspiration and engagement of our families and community partners across the town.”

Princess Anne renewed her patronage of the Royal Navy and Royal Marines Charity back in 2017.