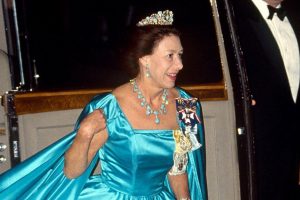 As the daughter of King George VI and the sister of Queen Elizabeth II, Princess Margaret wore some enviable jewellery over her lifetime. Margaret’s best-known jewel is perhaps her Poltimore Tiara that she wore for her wedding day in 1960, but she also wore some royal heirloom diadems.

The Persian Turquoise Tiara is also known as the Triumph of Love Tiara, and it earned this name due to various elements of its design.

Lover’s knots and laurel wreaths make up the piece, and the turquoise stones symbolise love.

Vibrant turquoise has long held significance to many. As The Spruce explains: “Turquoise is a popular gemstone that has long been prized in many cultures.

“It’s said to bring luck, peace, and protection, and it’s also one of the birthstones associated with December.

“Turquoise stones have many meanings that go above and beyond the beauty of the blue colour they provide.”

Made of gold and platinum, the tiara is also adorned with several glistening diamonds.

The Queen Mother was gifted the diadem by King George V along with a necklace, earrings and brooch to complete the parure.

The tiara was thought to have been originally purchased by Queen Mary from the royal jeweller Garrard.

Although the Queen Mother wore it on a few occasions, she later decided to gift it to her younger daughter Princess Margaret on her 21st birthday.

Since Margaret died in 2002, it isn’t clear whether the tiara now belongs to one of Margaret’s children Earl Snowdon or Lady Sarah Chatto, or whether it was returned to the Royal Family.

With its floral motifs, the tiara was also previously worn low on the head by the Queen Mother.

The tiara has proved popular in recent years with Kate, Princess of Wales, who wore it to welcome China’s President Xi Jinping to Buckingham Palace in 2015.

Margaret also wore the Cartier Halo Tiara when she was younger, another demure diadem that also belonged to the Queen Mother.

The Queen Mother gifted the tiara to the Queen to mark her 18th birthday in 1944 but she never wore it in public.

Margaret wore it for several outings instead, as did Princess Anne when she was younger.

Kate, Princess of Wales also wore the diadem when she married Prince William in 2011, giving the Cartier Halo Tiara its first outing at a royal wedding.

Margaret’s Poltimore Tiara, which she purchased herself at an auction, was impressively tall and she wore it at her wedding and throughout the rest of her life.

After she died in 2002, the tiara was sold for a staggering sum to an unknown buyer.