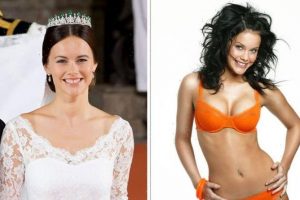 Princess Sofia walks up the aisle for her wedding in 2015

Princess Sofia of Sweden, 36, became a member of the Swedish Royal Family when she married Prince Carl Philip, but the beautiful royal was a model and TV reality contestant before becoming a Princess.

Princess Sofia of Sweden was a model and TV reality contestant before she married Prince Carl Philip, who is fourth in the line of succession.

The couple met through mutual friends at a nightclub in Sweden.

The royals have now been married for six years and have three kids.

But how was Princess Sofia before becoming a Princess?

In recent years, Princess Sofia’s appearance, as well as her style, have completely changed.

“WOW!” Melita said. “What a difference.

“From tattooed bikini model to real life Princess, and nothing shows this more than her remarkable dress transformation.”

“It is clear that whilst she has been able to keep some aspects of her youth and personality – one of the buses delivering guests to the royal wedding actually had ‘ROYAL WEDDING’ on the bus sign – her dress, or rather her ability to dress as she once did, is clearly long gone.

“Gone are the short figure hugging mini dresses, once worn in the hope of finding fame, replaced with the conformity that typifies royal life.

“Indeed the Swedish Royal Family, allow very little in the way of ‘personal style’, and is reported to be one of the strictest in terms of formality, occasion and dress.”

Melita continued: “That said, you cannot help being impressed with how she wears this and on the outside at least, how she has dealt with the change that such families can bring.

“Floral long flowing gowns while appearing in public with her newborn, light years away from the publicity-hungry model and reality TV star.”

However, Melita suggested the Princess may not be showing her true self anymore.

“Off the shoulder gowns and tiaras, yes she looks amazing, but just once wouldn’t it be nice to see her ‘true self’.

“One could imagine her is a pair of grey sweatpants and hoodie, on the way to the gym,” she said.

“Unfortunately there appears to be little scope in her ability to protract herself as anything but a ‘royal’.

“Shame really. It would be lovely to see her as she sees herself.

“I wonder what that is exactly,” Melita commented.

Princess Sofia was last seen at her youngest son’s christening in Stockholm, Sweden, where the royal donned a flattering long floral romantic dress. The royal stunned fans who took to social media to comment on Princess Sofia’s gorgeous look.