Home » Fashion » Regally bland: Why the BAFTAs can never out-frock the Grammys

Regally bland: Why the BAFTAs can never out-frock the Grammys

Every awards red carpet is known for a quality that can often be summed up in one word. Golden Globes? Colour. Oscars? Glamour. VMAs? Batshit crazy.

Then you have the BAFTAs (bland) and the Grammys (wild), and they happen on the same night each year. 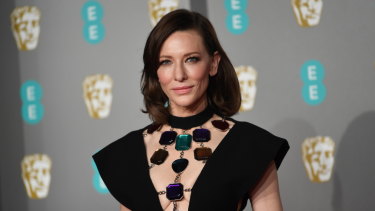 Hair change … Cate Blanchett arrived at the BAFTAs with a new dye job.Credit:EPA

Interestingly, the 2019 BAFTAs, held on Sunday night, London time, were not as boring as in past years (thanks, Cate Blanchett for changing your hair to brunette).

There was a proliferation of power suits (courtesy of model Irina Shaik, and actors Timothee Chalamet and Letitia Wright) and just enough frou to keep our attention for more than five minutes (Margot Robbie in Chanel was a standout). 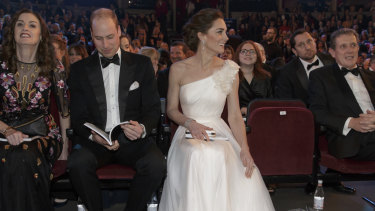 Regally bland … Prince William and Catherine, Duchess of Cambridge at the BAFTAs.Credit:AP

The Duchess of Cambridge arrived looking suitably, er, regal in Alexander McQueen and Princess Diana's earrings. But there was a part of me that wanted to see Meghan, the Duchess of Sussex across the Atlantic at the Grammys wearing a thigh-split Versace dress a la J-Lo and cradling her baby bump.

Fantasies aside, this is what we actually got at the Grammys. There was Lady Gaga in silver ruffled Celine, which prompted me to immediately forgive Hedi Slimane for that Paris show last season. But, really, the fashion moment of the night was the group appearance by Gaga, Michelle Obama (in a shimmery suit), Alicia Keys, J-Lo and Jada Pinkett Smith.

On social media, Mrs Obama explained her appearance to her followers: "A big part of friendship is showing up for your girls – that's why I was thrilled to be there for the one and only Alicia Keys at the Grammys. She is one of the most genuine and thoughtful people I know – there's no one better to help us all celebrate the unifying power of music!"

And then there were the hats. Channelling Celine Dion's 1999 Oscars look, J-Lo wore an oversized jewelled hat by Australian expats Ralph & Russo (that still managed to play second fiddle to her partner Alex "ARod" Rodriguez's pink and green jacket), while Janelle Monae was among the best dressed in a plunging white mini-dress and gold hat.

Even with that Spice Girls-worthy performance, nothing could top the biggest moment on the red carpet: Cardi B making an entrance as a giant pearl emerging from a clam shell courtesy of a mid-1990s vintage gown by Thierry Mugler.

So, truthfully, despite some highlights, the BAFTAs red carpet will never outshine the craziness of the Grammys, unless they change the date. Next stop, the Oscars.