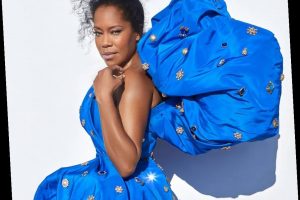 See the head-turning dress Regina King would've worn to the 2020 Emmy Awards. Plus, find out her reasoning for not wearing during the virtual ceremony.

Regina King served lewks ahead of the 2020 Emmy Awards on Sunday, Sept. 20. The Watchmen star shared all the details behind her royal blue dress by Schiaparelli Couture by Daniel Roseberry.

During E! News' Live From the Red Carpet, Regina explained she would've worn the eye-catching design if there was an in-person ceremony. Due to the ongoing coronavirus pandemic, the Emmys will be held virtually.

"A wonderful artist named James Anthony collaborated with my stylists Wayman and Micah," she revealed over the decision to try to make the best out of the unique situation. "We just felt like this night wasn't going to happen the way it normally happens and how could we still get involved and still have some excitement around it."

The actress acknowledged that they took all the necessary precautions to ensure a safe and fun shooting, sharing, "We had taken COVID tests because we had just done a photo shoot before and we were like, 'Let's do it!'"

The star's over-the-top gown wasn't the only thing to turn heads.

Regina dazzled from head to toe, as her makeup artist Latrice Johnson gave her a bright blue eyeliner that perfectly matched her design's vibrant color. Celebrity hairstylist Larry Sims also worked his magic and gave the actress a fun and flirty updo.

Miley Cyrus Wears Her Riskiest Outfit Yet Ahead Of iHeartRadio Show

Despite not wearing the blue number, Regina lit up the room (from her home) wearing a bright pink blazer and matching pants. She also paid homage to Breonna Taylor by wearing a shirt with her face and name emblazoned on the front.

Along with her stylish moment, the actress has a lot to celebrate. She is nominated tonight for her role in HBO's The Watchmen. In fact, the hit series swept the nominee pool after earning 26 nominations.

Earlier this year, the actress opened up to E! News about playing a superhero in the fan-favorite show.

"Now, here's the thing: Probably if you asked the 14-year-old me what I wanted to have played—'Do you want to play Sister Night?'—I would have thought that the name was cool, but I was not mature enough to understand that someone heroic could have that many complexities," shared at the time. "So, that's the reason why I say it was beyond what I could have ever imagined—in a positive way—because all of the things I've learned along the way from a teenager to now, I was able to employ them in some way in Angela."

It's only a matter of hours before fans find out if Regina and her HBO cast will sweep the annual ceremony. In the meantime, take a look at the list of nominees, a psychic's prediction on tonight's winners and more.

E! News has you covered for all the latest updates on the 2020 Emmys. Click here to read more.

END_OF_DOCUMENT_TOKEN_TO_BE_REPLACED

END_OF_DOCUMENT_TOKEN_TO_BE_REPLACED
We and our partners use cookies on this site to improve our service, perform analytics, personalize advertising, measure advertising performance, and remember website preferences.Ok