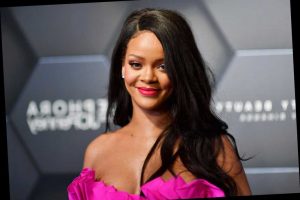 LVMH confirmed the news in a statement to WWD: "Rihanna and LVMH have jointly made the decision to put on hold the RTW activity, based in Europe, pending better conditions."

According to the outlet's sources, a small staff are wrapping things up at Fenty's headquarters in Paris.

The news comes on the same day as the announcement that Rihanna's lingerie line, Savage X Fenty, has "completed a $115 million Series B fundraising round" led by L Catterton (the largest global consumer-focused private equity firm) to "support the company's rapid growth and upcoming expansion into retail," a press release states.

"In two short years, Savage X Fenty has achieved remarkable success by disrupting the intimates category," Jon Owsley, Co-Managing Partner of L Catterton's Growth Fund, said in the release. "The brand strikes a unique balance between affordability, fashion, and comfort, stands deeply for inclusivity and diversity, and has differentiated itself by building an extraordinary level of affinity and unmatched customer loyalty. We believe the opportunities ahead for Savage X Fenty are enormous, and we look forward to leveraging our extensive experience in scaling digitally-native consumer brands and partnering with Rihanna, Christiane, Natalie, and the entire Savage X Fenty team to help the Company realize its full potential."

The singer turned fashion and beauty mogul, 32, made history when she inked a deal with LVMH in May 2019, becoming "the first woman to create an original brand at LVMH and the first woman of color at the top of an LVMH maison," according to the The New York Times reported.

Rihanna's successful Fenty line joined their powerhouse lineup of brands which include Céline, Dior, Givenchy and Fendi among many more.

"Designing a line like this with LVMH is an incredibly special moment for us," the star said in the statement. "Mr. Arnault has given me a unique opportunity to develop a fashion house in the luxury sector, with no artistic limits. I couldn't imagine a better partner both creatively and business-wise, and I'm ready for the world to see what we have built together."

Rihanna reflected on this major career achievement in a touching Tweet posted this morning, writing, "big day for the culture. thank you Mr. Arnault for believing in this little girl from the left side of an island, and for giving me the opportunity to grow with you at @LVMH."

After the success of their first collaborative project Fenty Beauty (which sent shock waves through the makeup world by releasing 40 inclusive shades of foundation in 2017), LVMH Chairman Bernard Arnault said in a statement, "Everybody knows Rihanna as a wonderful singer, but through our partnership at Fenty Beauty, I discovered a true entrepreneur, a real C.E.O. and a terrific leader."

He added, "She naturally finds her full place within LVMH. To support Rihanna to start up the Fenty Maison, we have built a talented and multicultural team supported by the Group resources."