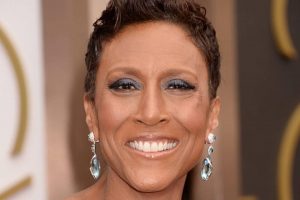 Robin Roberts sent Good Morning America viewers into overdrive on Tuesday with her outfit choice. The star looked incredible in a pink dress which fans won’t be able to forget fast.

Robin delivered her Tuesday Thoughts in a post she shared on Instagram, and while her words were wise, her dress almost stole the show!

Robin wowed in the figure-flattering ensemble which had an asymmetric neckline and caped sleeves.

She’d teamed it with a simple, pink necklace and matching earrings and fans were desperate to find out where she bought it.

“GOOD MORNING ROBIN I LOVE YOUR BEAUTIFUL OUTFIT. WHERE CAN I BUY THAT DRESS,” asked one fan, as another said: “Pretty in pink.”

MORE: Robin Roberts urged to stay safe and warm as she shares new update from her current location

Others also asked who designed her outfit and Robin responded. “Thank you! I’ve had this dress a loooong time. Not sure where you can find it now.”

Robin was also thanked for her prayers and her inspirational message which she delivers on a daily basis.

This week, Robin shared a very special milestone of her own as she acknowledged that it has been nearly a decade since she made her long-awaited return to the beloved morning show after recuperating from her bone marrow transplant.

In 2012, Robin underwent a bone marrow transplant after developing myelodysplastic syndrome, a rare blood disorder affecting the bone marrow and sometimes referred to as preleukemia.

Robin and her partner Amber have been together 16 years

The television host shared a nostalgic picture of herself along with her co-hosts at the time, George Stephanopoulos, Sam Champion, Lara Spencer, and George Elliott.

Robin began her heartfelt post with: “Totally forgot until this popped up on my feed…” She went on to say: “9 years ago today I was blessed to return to @goodmorningamerica after my bone marrow transplant. Vividly remember what I said: ‘I’ve been waiting 174 days to say Good Morning America!'”

Fans rushed to send their love, support and well-wishes as they congratulated her on the special moment.