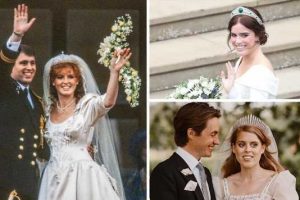 The Queen and Prince Philip were thought to have gifted Sarah Ferguson a brand new diadem, the York Tiara, to mark her marriage to their son Prince Andrew in 1986. But unlike other royal brides, Sarah didn’t have to give her tiara back to the Queen after the ceremony and she wore it on several occasions in the following decades.

The York Tiara made its dramatic debut at Sarah and Andrew’s wedding at Westminster Abbey, and it was concealed under a flower crown until its big reveal.

Jeremy Hinds, Sales Director of jewellery experts at F Hinds, said: “Sarah Ferguson debuted the York Tiara to the world following her wedding ceremony, a move seen to symbolise her new status as a Princess.

“But not just a wedding accessory, the Duchess of York continued to wear the tiara through her time in the Royal Family – and it even made appearances after her divorce from Prince Andrew in 1996.

“The York Tiara’s final public appearance was in 2001, and the piece has not been publicly seen since.

“It’s typical that a royal bride borrows a piece from the Queen’s personal collection, but the York Tiara was a break from custom, with the Duchess keeping it beyond the wedding ceremony.

“It’s thought that the tiara was a personal gift from her mother-in-law, Queen Elizabeth II.”

In the run-up to Princess Eugenie’s wedding in 2018, many thought the bride would wear her mother’s York Tiara.

However, Eugenie opted for a relatively unknown diadem from her grandmother the Queen’s collection.

The Greville Emerald Kokoshnik Tiara features a central cabochon emerald that weighs in at a reported 93.7 carats.

An array of rose-cut pave diamonds adorn the piece, with some extra emeralds thrown in which perfectly complemented Eugenie’s green eyes.

The bride further accessorised on her big day with a pair of diamond and emerald drop earrings, a gift from her husband Jack Brooksbank.

Maxwell Stone of fine jewellery experts Steven Stone commented on Eugenie’s other wedding jewels: “Though Princess Eugenie kept her jewellery fairly simple on her wedding day, it’s clear that a lot of thought went into each piece as they all have a family connection – from her wedding ring that was made from a piece of Welsh gold given by Queen Elizabeth II, to a pair of diamond and cabochon emerald drop earrings that were a gift from her new husband.

“The Princess surprised us all by not wearing her mother’s tiara – instead opting to borrow the Greville Emerald Kokoshnik Tiara from her grandmother, the late Queen Elizabeth II.

“Featuring a 93.7-carat cabochon-cut emerald, it’s the most valuable royal tiara and worth a staggering £1million.

“Padparadscha sapphires are so rare in fact that many people haven’t heard of them – they’re strikingly beautiful with unique shades of pink and orange that often resemble the colours of a sunset.”

Princess Beatrice on the other hand, who married Edoardo Mapelli Mozzi in 2020, also opted not to wear the York Tiara, although she did pick a diamond diadem.

Beatrice wore Queen Mary’s Fringe Tiara, the dazzling spiked diadem the Queen herself wore when she married Prince Philip in 1947.

The piece has only ever been worn by one other royal bride, the Queen’s only daughter Princess Anne.

The Queen also lent Beatrice a white Norman Hartnell gown from her archives so she could have a special dress for her lockdown wedding day.